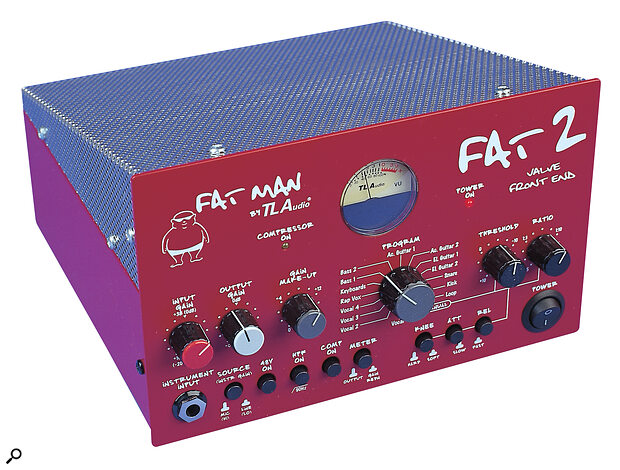 TLA's original Fat Man Fat 1 was a hybrid tube/solid‑state stereo compressor offering a range of switchable preset treatments as well as a fully manual mode. The concept was simple — take the guesswork out of setting up a compressor. It proved very popular, judging by the number of people who tell me they have one, so it comes as no surprise that it now has a new sibling — the Fat 2. The main difference between the two models is that the Fat 2 is a single‑channel unit incorporating a mic/line preamplifier, making it suitable for use with both traditional hardware‑based and soundcard‑based studios. At the heart of the unit is a compressor with 15 preset treatments, customised for different instrument and vocal types, as well as a manual mode. Because compression depends on the input signal level, there's an input gain control that the user has to adjust in all modes.

The Fat 2 sports the same squat format and red paint job as the Fat 1, and uses the same transconductance gain‑control circuit as the TLA Classic and Ivory models, augmented by a single ECC83 dual‑triode tube (run at 100 Volts) in front of the compression section. 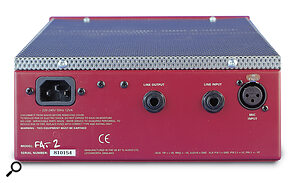 Power is via an IEC mains socket and the line ins and outs are balanced (TRS jacks) whereas the mic input is a standard XLR with switchable 48V phantom power. A high‑impedance (unbalanced) instrument input is available on the front panel and the maximum output level is 26dBu when used balanced or 20dBu when used unbalanced. In practice, there's plenty of signal available to feed those level‑hungry soundcards where digital full scale is around +15dBu. The mic/line gain controls also affect the instrument input, and when both mic and instrument sources are connected, both are mixed. It would make more sense to me if plugging into the instrument input muted the mic input.

The red front panel is both simple and cheerful with the familiar Fat Man motif and felt tip marker‑style typeface. A somewhat small, round moving‑coil meter can be switched to read either the output level or the gain reduction, while the presets themselves are selected using a 16‑way rotary switch. Knobs are provided for setting the Input Gain, Output Gain and Gain Make‑up, with Threshold and Ratio knobs for use only in manual mode. Note that the Threshold control is wired the opposite way to most models so that the more clockwise you go, the lower the threshold and the greater the degree of compression. Also available in manual mode are switches to select Hard or Soft Knee, Fast or Slow Attack and Fast or Slow Release. The fast/slow switches interact with the unit's programme‑dependent envelope characteristics.

The remaining buttons are used for Mic/Line Source selection, phantom power activation and high‑pass filtering (90Hz). The separate Output Gain and Gain Make‑up controls enable the processed and bypassed sounds to be matched in level, as Gain Makeup is active only when the compressor is in circuit. A red LED indicates that the unit is powered up, while a yellow LED shows that the compressor is in circuit.

There are only so many compressor settings you can use before the differences become too small to be noticeable, so the presets offered here, combined with the Input Gain control, cover pretty much all bases. All you need to do is watch the gain‑reduction meter and set the input gain. The vocal settings range from gentle gain control to overt 'verge‑of‑pumping' compression, while the instrument settings include some nice hard, punchy presets that would work well in dance and rock music. It's also sometimes possible to get good results by using presets on sources other than those for which they were intended.

Like the other TLA compressors I've tried, the Fat 2 has a transparent yet slightly warm an d flattering sound, without sounding overdone, and the mic preamp is clean and solid‑sounding. When you push it harder, you can hear the compressor working, as you'd expect, but you get the impression that it's working with you, not against you. As with the Fat 1, I didn't feel the lack of fully variable attack and release controls was a problem. As the input gain is increased, the tube section is driven harder, which introduces a subtle but tangible degree of tube warmth. In fact the only problem I encountered was when using a DI'd electric guitar, where I found the Fat 2 preamp to be slightly noisy, even with the compressor bypassed. Noise tends to be a problem with high‑impedance input stages at the best of times, but in this instance I felt the performance could have been better.

Ultimately, the Fat 2's compressor produces good results with the minimum of effort, while the mic preamp is also rather better than you'd get in a typical budget desk. This, combined with the very attractive UK price, makes the Fat 2 a very practical front‑end for any recording system.

Apparently the presets for this unit were fine‑tuned by SOS Demo Doctor John Harris, and are aptly‑named Vocal 1, Vocal 2, Vocal 3, Vocal 4, Rap Vox, Keyboards, Bass 1, Bass 2, Acoustic Guitar 1, Acoustic Guitar 2, Electric Guitar 1, Electric Guitar 2, Snare, Kick and Loop. As a rule, where two or more presets are designed for the same instrument or voice, the compression gets progressively harder with each version. A CMOS switching array is used to select different component values within the compressor for each preset, so the signal path is completely analogue.

The Fat 2 is a very practical and nice‑sounding front end for anyone who wants their compression made easy.