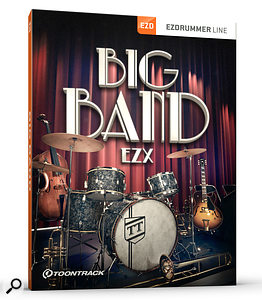 The latest expansion for EZ Drummer 2 (it also works with Superior Drummer 3) aims to recreate the drum sounds associated with swing-era big bands and jazz ensembles. Recorded by renowned producer and engineer Al Schmitt, the library's two period-correct drum kits were tracked to tape and feature natural reverbs from Capitol Records' legendary chamber and traditional plate reverbs to capture a true retro sound. These kits are both taken from the five kit sessions featured in the Decades SDX expander for Superior Drummer (reviewed elsewhere this month), so this EZX version might best be described as a pared-down version with fewer instruments and articulations, and weighing in at around 3GB. Nevertheless, it still feels very comprehensive and sounds superb.

The two different kits cover warm and intimate to lively and energetic. The most noticeable departure from traditional pop drum sounds is the round, resonant sound of the large diameter, typically 26-inch, kick drums used back in the day. This is all the more pronounced on the drums fitted with vellum rather than synthetic heads. Kit one is a Slingerland Radio King with Zildjian Istanbul cymbals plus a Murat crash cymbal recorded with both sticks and brushes.

Kit two is mainly Ludwig & Ludwig, but with a Leedy 14 x 26-inch kick and all the drums are fitted with calfskin heads. Additional drums are provided in the form of a damped version of the Leedy kick and a Leedy 5.5 x 14-inch snare, with cymbals from Zilco and Bosphorous, the latter sampled with both sticks and brushes.

In combination with the different ambience/reverb treatments there's a lot of tonal range, but all sitting comfortably within the appointed genre. There are some nice brush snare hits and cymbal hits too but no brush swirls, which would have made a useful addition. Also appropriate for the genre are some snare hit options with the snare wires turned off. The toms are suitably plummy and there's a good choice of high-end cymbals.

This EZX pack features the usual custom mixer section allowing the various mics and reverb/ambiences to be balanced and there's a selection of big band-inspired MIDI drum grooves to get you in the mood. While not everyone will want to recreate big band music, the eclectic nature of modern productions means that these kits may well see some use outside of their intended genre where their warm, somewhat intimate sound could be a good fit.

Your Questions Answered
4 weeks 14 hours ago.