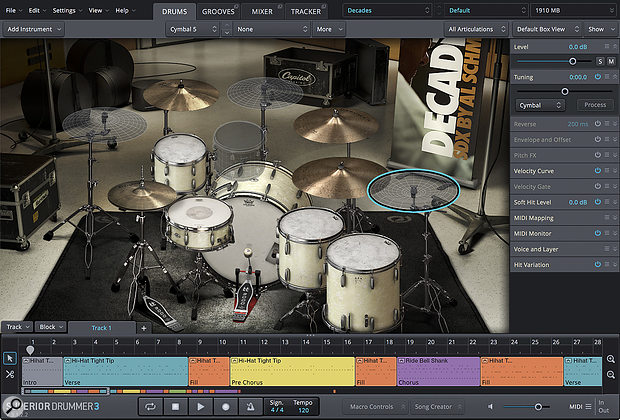 Toontrack have been at the forefront of virtual instrument development for many years, and the release of Superior Drummer 3 (reviewed by myself and John Walden in SOS October 2017) raised the bar to a new level of authenticity and sophistication. It's hard to imagine that the extensive library that comes with it isn't enough for any musical style or production, but Toontrack continue to produce an incredible array of SDX (Superior Drum eXpansion) packs, covering a multitude of genres and styles. Each one features exquisitely recorded drums and percussion captured in some of the world's most incredible-sounding studios. 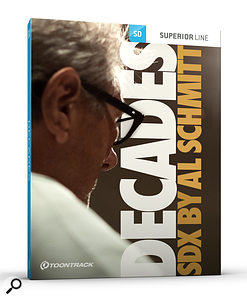 The latest addition to the SDX range is Decades, a collection recorded by the legendary engineer and producer Al Schmitt at Capitol Studios, and drawing upon the expertise of his 60-year career. Even from this short description it sounds like a pretty mouthwatering prospect — so does Decades live up to the hype?

They Can Call Him Al

Born in 1930, Al Schmitt has had a career spanning six decades of classic recordings, from Frank Sinatra, Elvis and Sam Cooke through to Toto, Steely Dan and Michael Jackson. He has a wealth of experience that has been rewarded by the amazing total of 160 Gold and Platinum albums, 23 Grammy Awards and a star on the Hollywood Walk Of Fame.

Al Schmitt's working life began before the equalisers and compressors we know (and often over-use) today were commonplace in studios, so his technique is based around achieving the best sound at source, using a skilful combination of microphone choice and placement, in conjunction with the best-sounding recording spaces.

Since moving to Hollywood, Schmitt has almost exclusively worked at Capitol Studios, so the impressive space of Studio B, with its exceptionally crafted acoustics, was the obvious choice for recording Decades SDX.

The pack comprises five full drum kits, 12 snare drums, nine kick drums, and a broad collection of cymbals and hi-hats, all supplied by the legendary Drum Doctors rental store in Hollywood. There are some real gems in this collection, including unique drums that have their own fascinating story.

The whole pack accounts for a whopping 98GB of data and, with my slow 'rural' internet connection, it did take a while to download. The Toontrack Product Manager application makes the installation process very simple, however, and within a very short time I was up and running.

Chronologically, the first kit is the 1930s Broadway kit, a genuine 1930s set combining drums from Leedy and Ludwig fitted with calfskin heads — apparently the original heads they were fitted with! As you'd expect, this is an incredibly warm and mellow-sounding kit. It was recorded using four different configurations: sticks, sticks with snare wires off, brushes, and felt mallets. Three alternative snares are available, including a classic Slingerland Radio King, along with a selection of vintage and modern Zildjian cymbals.

Moving on a decade, we have the Ballroom swing kit, a 1940s Slingerland Radio King, again fitted with calfskin heads. Among the many alternate drums in this kit is a 1950s kick with a more open and airy sound.

The 1970s heralded a very distinctive drum sound — think of those soul disco records with that funky, dead, dampened sound. The Ludwig Hollywood kit used for the 1970s Soul and Tight Pop reproduces this vibe perfectly. Additional damping was used to help create the sound in the studio, including towels on the drums — exquisitely reproduced graphically when you select the Tight Pop kit. If the sound is a little too dead for your liking, the room and ambience mics allow for the kit to be 'opened up'.

The 1980s Rock & Fusion kit comes complete with interesting associations. This prototype Pearl MX maple kit was originally owned by Steve Ferrone, who encapsulates the '80s pop and rock sound through his work with Duran Duran, Eric Clapton, Chaka Kahn, Tom Petty and many more. Clear Emperor heads give the kit a bright and punchy sound that works well in combination with its warmer maple shells, and the 'default' snare drum is a 14 x 6.5-inch Ludwig Black Beauty. This is already a classic snare drum and probably the most recorded snare in history (although the Ludwig Supraphonic 402 also included in the Decades SDX has a claim to that title too). But this Black Beauty goes one better. It's the actual snare used by Jeff Porcaro on the TOTO IV album (engineered by Al Schmitt), which helped to create the sound of such classic songs as 'Rosanna' and 'Africa'. So, if you've ever wanted that Jeff Porcaro sound, now you can quite literally have it.

Finally, we move into the 1990s with the Modern Jazz Kit, another maple kit but this time from Yamaha, and featuring a medium to high tuning to give an open, light and jazzy sound. Recorded with both sticks and brushes, the cymbal configuration includes a number of Istanbul Agop models that have undergone a unique temperature treatment by Frank Gegerle, giving them a warmer, dryer tone that fits perfectly with the kit.

With someone of Al Schmitt's pedigree at the controls you would expect nothing less than outstanding audio quality, but Decades goes further by adding huge amounts of character to the drums.

Al Schmitt At The Desk

There would be little point in hiring such a stunning range of drums and cymbals if the recording process wasn't comparable — but with Al Schmitt at the controls you get the very best. 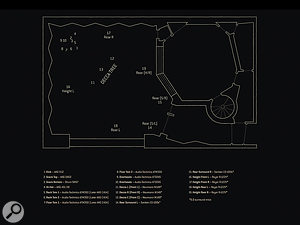 Mic positions and list of mics used to record the Decades SDX pack.Using a 9.0 surround configuration (compared to the 11.0 configuration in the SD3 default library), every nuance of the Capitol Records Studio B is captured. The graphic shows the mic configuration and exactly which mics were used. Of particular interest are three Neumann M149 mics used in the Decca Tree configuration often employed in orchestral recording. The three omnidirectional mics are arranged in a T-shape and offer a very wide stereo image.

SD3 owners will also notice the use of only one kick drum mic, rather than the more usual three (inside, outside and sub). This is Al Schmitt's preferred way to record kick drums, and he uses his own personal AKG D12, which is only the fourth one ever made!

The drums themselves sound incredible, but pushing up the room faders in the mixing board is an absolute joy. Every kit bursts with life. For me, this is what sets apart both SD3 and the Decades expansion. These days, many of us have got hundreds of sampled snares and kick drums, all beautifully recorded with close mics and sounding fantastic, but to be able to put them in their own natural ambience lifts the sound to another level. The ability to add individual drum bleed to each ambient mic, and mix this with the stunningly recorded close-miked instrument, adds amazing life and character to the kits.

Each kit can be loaded in a default state, or you can choose from one of the many presets created by Al Schmitt himself or by Toontrack. The presets offer different combinations of drums, mic channels and effects, to create specific sounds or styles.

Al Schmitt's presets are refreshing in their simplicity, providing an incredibly honest and natural representation of each kit, with next to no effects processing. Some bus compression is added, plus a little reverb, but most of the sound is created by the mics themselves and the balance between them. 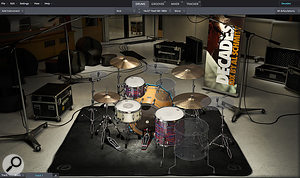 The Deep Blend Kit combines drums from a number of different kits to create a unique combination of sounds and textures.Toontrack's own presets go further, introducing a lot more processing into the signal path to create some fantastic-sounding kits. A great example of Decades' flexibility is the 'Deep Blend Kit' preset, which combines the Hollywood 1970s toms with the Pearl MX kick drum and the 1930s Radio King snare, to produce a tight and thumping kit.

It's The Way You Hit 'Em

Those of you already familiar with Superior Drummer will know that not only are all drums exquisitely recorded, they are also recorded being played in a number of different ways — or articulations, as Toontrack call them. For example, the snare drum has nine different articulations, all of them multisampled: Centre, Off Centre, Edge, Rimshot, Side Stick, Stick Shot, Rim Only, Flam, Closed Roll, and a further six articulations when using brushes. As you might expect, the hi-hat offers the most articulations (26 in total), due to the extreme variation in hi-hat playing styles.

Decades actually introduces two new articulations to the Ride cymbal — Bow Tip 2 and FX — which lend themselves to certain jazz playing techniques. All in all, the level of variation and realism is quite astonishing and is particularly apparent in the included MIDI Grooves.

Performed by session drummer Norman Garschke (who is also responsible for the SD3 core library), the huge range of included MIDI grooves are perfectly matched to the various kits included in the Decades SDX, with many taking advantage of the brush and mallet articulations. It's difficult to know whether to use a phrase like 'the level of realism is exceptional', because these are real drums, recorded by a real drummer... but I think I'll use it anyway! Whether isolated or in a song, you would find it almost impossible to distinguish between these grooves and actual audio recordings.

Of course, here you have the added advantage of being able to use any kit at any tempo, and you can tailor the grooves further in the Grid Editor or Edit Play Style window, should you need to. As with all SD3 MIDI grooves, they can then be dragged onto the song track to build your composition. 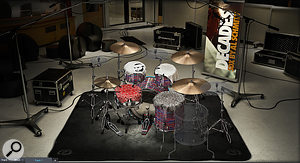 Even the towels used for damping the kit are authentically recreated in Decades.All the sounds, articulations and mixer channels are at your fingertips, but I think you would be hard pushed to create grooves as good as these ones from scratch, so their inclusion, along with all of the other available MIDI packs, is a big part of SD3's appeal.

Although this SDX is called Decades and includes kit names like 1930 Broadway and Ballroom Swing, don't be misled into thinking it is exclusively a retro pack. Of course, these kits are from a specific era and certainly lend themselves to the styles of music their 'category' suggests, but they are perfectly suited to all manner of styles and genres.

Even without using any of the extensive plug-ins that SD3 provides, it's possible to dramatically alter the sound and feel of the kits by adjusting room mics, adding a different snare or changing the tuning or decay of a drum, as shown by some of the Toontrack presets.

With someone of Al Schmitt's pedigree at the controls you would expect nothing less than outstanding audio quality, but Decades goes further, by adding huge amounts of character to the drums. The inclusion of historical background about such things as original 1930s calfskin heads and Jeff Porcaro's own snare make this SDX feel even more special and significant.

I'm already a big fan of Superior Drummer, and I still feel that the provided content in the standard package is more than enough for most, but if you want to splash out on one expansion pack, it really has to be Decades!

It would be hard to find a more mouth–watering combination of engineer, studio location and drums. If you are looking for an all-round package that, as its name suggests, covers several decades of classic recordings, this is definitely the one.