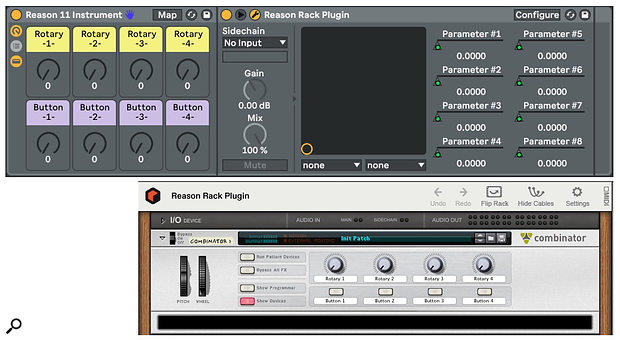 We show you how to get Live playing nicely with Reason 11.

Version 11 brings some radical changes to Reason from Reason Studios (previously Propellerhead Software). The big news for Live users is that Reason now includes VST3 instrument and effect plug-ins. You can no longer route the Reason 11 stand-alone application to Live using ReWire, which has been discontinued, but using the plug-in makes a number of things easier. (It is still possible to ReWire older versions of Reason to Live, so you haven't lost access to older projects that use that as long as you hang on to your earlier software version of Reason.) One downside of the plug-ins is that they do not support MIDI output. This is a shame because Reason offers many wonderful MIDI sequencers and Players. A rather tedious workaround is to export MIDI clips from Reason stand-alone and import them in Live.

If you're not a Reason user, you may find it worth a look. One way to think of it is as a full-featured but still very accessible modular synth plug-in. Modular synth plug-ins such as Voltage Modular and VCV Rack, fixed-format modular synths such as those from U-he and Arturia, and do-it-yourself applications like Max For Live and Native Instruments Reaktor typically feature single-purpose modules — oscillators, filters, controllers, effects and so on. By contrast, Reason modules are complete instruments, effects and MIDI devices. Cabling (mostly on the back panel) is for the main inputs and outputs along with occasional sub-module ins and outs. And, much of the I/O cabling is automatic. In short, your synth and effects library gets a huge boost and significant modular flexibility with much less time spent getting tangled up in cables. Here are several ways to get the most out of Reason as a VST plug-in in Live.

You'll save a lot of time by creating Live Racks to hold the Reason VST instrument and effect plug-ins and then saving each in your User Library. Here are the steps for the instrument plug-in:

For the Reason effect plug-in, follow the same steps on an audio track using a Live Audio Effect Rack. One advantage in using this single-Combinator setup is that you can now configure the Combinator controls in Reason and have them immediately available in Live. This remains true (though the Combinator labels may change) when you replace one Combinator preset with another. You can save VST plug-in presets for either plug-in for use in other DAWs, but for use in Live you're better off saving their enclosing Live Racks.

A single Reason Rack can hold many instruments, effects and MIDI devices, but Reason instruments must either be played by sequencers in the Reason Rack or from a single MIDI input from Live because Reason doesn't support multi-channel MIDI. Using a single MIDI input means that the instruments must be separated by key zone or must be captured separately as audio. When that presents a problem, as it will in performance, use multiple Reason VST plug-ins.

The big news for Live users is that Reason now includes VST3 instrument and effect plug-ins.

When One Is Enough

The Reason VST plug-in presents eight stereo audio outputs to Live, and you can capture them on separate Live audio tracks by turning off their red 'summing' buttons, as shown at the top of Screen 1. This leaves you free to mix and process individual Reason outputs in Live. You can then do quite a lot with a single instance of Reason containing a single Combinator. The Live set at the bottom of Screen 1 has a single MIDI track for the Reason Rack along with four audio tracks fed by separate Reason Rack outputs. The Main output (1-2) is always sent to the MIDI track holding Reason, and I have not used that output so that I can capture each Reason instrument on a separate audio track and not worry about audio on the Reason track. 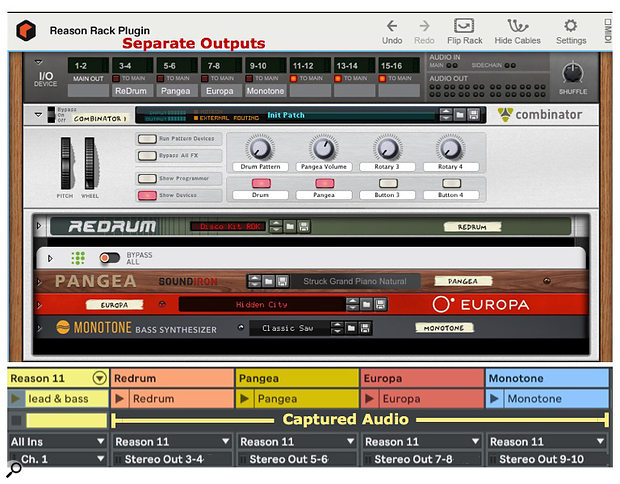 Screen 1: The four audio clips were captured in one pass from one Reason Rack with sequencers to play drums and guitar and one MIDI clip to play lead and bass in separate key zones.

The first device in the Combinator is Redrum, a 10-pad drum machine with a built-in 16-step sequencer holding 32 programmable patterns. In Screen 1, the first Combinator knob selects the pattern and the button below it enables and disables the sequencer. Redrum's audio is cabled to output 3-4 to be captured on the second track. The second device is Pangea with a guitar-like preset, and it is sequenced by the PolyStep Player device. The second Combinator knob controls Pangea's volume and the button below it turns the Player on and off. The remaining two devices, Reason synthesizers Europa and Monotone, produce lead and bass sounds. Europa's note range is set to E2 and above, whereas Monotone's is restricted to notes below E2. The MIDI clip on the Reason 11 track plays both. Clip modulation of the Rack's knobs in that clip manipulates the Combinator knobs and buttons.

When One Is Not Enough 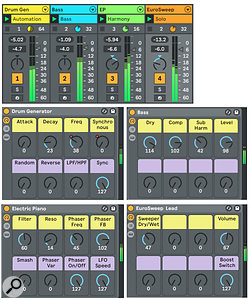 Screen 2: Each of the four tracks in this song holds an instance of the Reason VST instrument plug-in. The drum track again uses Redrum's sequencer, and the rest play MIDI files from their track.You will need to use several Reason VST instrument plug-ins when you don't want to separate MIDI input by note range, although you can get around this by using separate MIDI clips and capturing audio from each instrument individually. Using several VSTs also allows you to mix in Live without adding audio tracks to capture Reason's output.

A third advantage is that Reason comes with hundreds of Combinators crafted over the years for every conceivable purpose. Using several VST instances with each in its own Live Instrument Rack as described above gives you instant Live Rack Macro-knob access to the controls deemed essential by the Combinator's designer. Finally, the Live CPU load is approximately the same with four instruments in one Reason VST Rack as it is with four VST Racks. 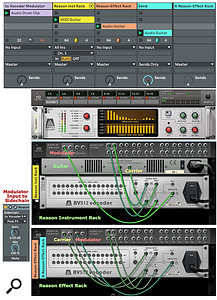 Screen 3: The yellow, orange and blue tracks illustrate three ways to vocode a guitar with the drum clip playing on the purple track. The guitar is in the Reason Instrument Rack on the yellow track, whereas it is in the audio clips on the orange and blue tracks.Reason has a large collection of audio-effect devices as well as complex effect Combinators. When processing a Reason instrument, simply add the effect device to the Reason instrument Rack. For processing a Live instrument or audio clip, add the Live Audio Effect Rack described above to the track and then load the effect into the Rack's Reason effect plug-in. For effects with two sources such as a vocoder, you must use the Reason effect plug-in to gain access to both sources.