Since their acquisition by Behringer's parent company Music Tribe in 2015, TC Electronic have launched a concerted assault on the guitar effects market. Sitting alongside the array of overdrive, delay and modulation effects in their rapidly expanding stompbox line-up is this little oddity, the June‑60 Chorus. 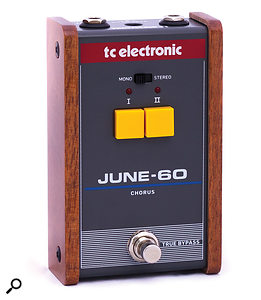 Billed as a faithful recreation of the built-in chorus effect found in the Roland Juno‑60 synthesizer, the June‑60 pedal goes all out to recreate the Juno aesthetic, with its red and blue graphics, yellow buttons and wooden end cheeks (although the grey background is really more Juno‑106 than 60). Cheeky as this is — you'd be forgiven for thinking it was an official Roland tie-in — it does make for a rather eye-catching guitar pedal and an unusual one at that, with just a mono/stereo mode switch and two speed selection buttons by way of controls.

Inside, the pedal is neatly and solidly put together, with the expected mix of surface-mount and through–hole components. These include a set of reproduction bucket–brigade delay chips manufactured by Coolaudio — who, like TC themselves, are part of the Music Tribe family. It can be powered by a 9V battery or a standard centre-negative mains adaptor and features a mono input and a TRS mono/stereo output, both on quarter–inch jacks. Unless you're plugging into something with a TRS stereo input, using the pedal in stereo mode will require a TRS splitter or Y-cable, which may be more of an inconvenience to guitarists than keyboard players. It might have been nice to a have a stereo input option, though it should be noted that the Roland Juno's chorus effect was also mono-in, stereo-out.

In terms of character, the June‑60 leans more towards watery, swirling mids than glassy, ethereal shimmer, with a pronounced mid-range throb almost verging on Univibe territory.

Plugging in a guitar first, engaging the pedal brings a slight increase in volume and a rich, warm-sounding chorus effect. In terms of character, the June‑60 leans more towards watery, swirling mids than glassy, ethereal shimmer, with a pronounced mid-range throb almost verging on Univibe territory. The depth of the effect, which is not adjustable, is set fairly high but the pedal's vibey warmth and smooth sweep mean that it avoids the kind of seasick wobble you might encounter when maxing out the depth on some chorus pedals.

The two yellow buttons give you a choice of medium or fast modulation speeds, both sensibly chosen and eminently usable. Unlike the effect built into the Juno, you can also push in both together, which sets up a slightly odd rhythmic effect as the two LFOs overlap and interact.

Although it's primarily designed as a guitar pedal, the June‑60 can of course be used on synths and other sources too. Here, I found it most effective when used in stereo mode, where it adds a great sense of width and some pleasing upper–mid complexity. The effect's generous depth and mid-range focus tend to lend bass and pad sounds an organ–like rotary-speaker vibe — that's no crime in itself, but it does narrow the range of applications.

Does it sound like the Juno‑60 chorus? Not really, to my ears at least. It's best viewed as a warm and vintage–voiced chorus/vibe effect, dressed in Juno–inspired packaging, with stripped–back controls that encourage playing rather than knob twiddling. It is also worth noting that this pedal is affordably priced, making it a less versatile but certainly more characterful alternative to the wealth of budget chorus pedals on the market.