Boasting three pressure-sensitive footswitches, this delay pedal puts more control at your feet than most.

TC Electronic's Flashback Delay has undergone a number of reincarnations over the years — I found their 'Alter Ego' version, which was designed to emulate vintage delay hardware, particularly interesting. Today there are still various 'standard' Flashback pedals available: the smallest and most affordable is the three-knob Mini, and this is joined by the four-knob 'standard' format pedal and the large-format Flashback Delay 2 X4. It's the last of those we're reviewing here.

As with the earlier X4 model, the Flashback Delay 2 X4 is large beast, measuring some 230mm wide and 135mm from front to back, and it is finished in the familiar bright blue. The top of the case is adorned with five large knobs and four footswitches, with status LEDs that allow two banks each of three presets to be called up, and the fourth switch acts as a tap tempo. The six TonePrint slots around the selector switch can all be filled with patches of the user's choice, though they already come loaded with default patches.

At the back of the case are stereo inputs and outputs on metal jack sockets (true stereo ins and outs are supported, but the pedal is just as happy to work in mono if you prefer), and an expression pedal input on a TRS jack. There are also MIDI In and Thru connectors, a mini USB port (used for connecting to the editor and for firmware updates) and a socket for the included 9V, 300mA power supply. Either buffered bypass or true bypass operation can be selected; a small toggle switch on the back panel is used to set the bypass type, and another offers you a 'Dry Kill' option. With Dry Kill off, the dry guitar sound always comes through at unity level, even if you select the reverse-delay algorithm.

The rear panel includes a switch to select a buffered or hard-wired 'true' bypass.

This particular incarnation of the Flashback offers 16 delay types, which should be more than enough for anyone, and 10 of these are accessed directly from the rotary selector on the left. This selector also engages the looper mode. In Delay mode, there are knobs for Delay Time and Feedback with a 10-way (plus custom setting) division switch to set the repeats to the desired multiple of the tap time. The delay types available directly from the front panel are: Analog, 2290, 2290 with Mod (both of those are obviously based on TC's classic 2290 rackmount delay unit), Dynamic, Crystal, Tape, Ping Pong, Lo-Fi and Reverse. A centre-sprung toggle switch positioned between the Feedback and Level controls selects between Bank 1/2 or Store, and the adjacent LED changes brightness when you use the MASH feature that has appeared on some earlier TC pedals.

"Huh... What's MASH?" I hear you ask. Well, essentially, it's a really clever feature that enables many effects that would usually require an external expression pedal to be achieved without such a pedal. TC have managed this by making three of the pedal's four footswitches pressure-sensitive, which means that they can be used as variable controllers. You can, for example, use a switch to control the delay feedback, or to allow you to build up dub-style repeats. You can set the targets for MASH control in the TonePrint software, and this also allows you to adjust the control laws of the pressure switches and knobs. It's an excellent, imaginative feature that makes this pedal much more versatile than most — though of course there's still the option to plug in an external expression pedal if you feel the need!

As with the previous model, the pedal can also act as a looper, and in this mode the pedal can loop up to 40s of audio. Of course, the footswitches take on new roles in this mode: from left to right, they cater for the record, play/pause, play once and undo/redo functions.

I really like the new Crystal delay algorithm, which sprinkles some higher-octave magic in with the repeats.

As you'd expect from TC Electronic, the sound quality of the Flashback 2 X4 is extremely good overall. Sonically, it sounds very similar to the smaller Flashback Delay that I use on my own pedalboard, and that's a good thing in my book! There are some lovely modulation options, too, as well as convincing emulations of different types of delay, such as analogue, tape or digital, but this pedal offers more delay-type options than previous Flashback Delays. I really like the new Crystal delay algorithm, in particular, which sprinkles some higher-octave magic in with the repeats. I can see plenty of uses for that pressure-sensitive MASH control feature, too, especially for anyone who, like me, is into making any sort of ambient music. And, of course, the ability to store and access six user presets could prove to be very useful in a live-performance setting.

In summary, then, if you took it straight out of the box, and used only the top-panel controls, the Flashback Delay would already be great value at this price — even if it did nothing else. But the access to extra patches and the level of tweaking made possible by the TonePrint app elevate it to a completely different level and make the price more remarkable still. There are a couple of tiny niggles, such as having a fixed-level dry sound rather than a dry/wet mix unless you engage the rear-panel Dry Kill toggle, but on the whole this latest update to an old friend is both really usable and great value to boot.

At this price Electro-Harmonix probably offer the closest alternatives, though they don't have an equivalent to TC's TonePrint app. Boss's DD500 is slightly pricier (though they make less expensive delays too), as are equivalent offerings from the likes of Eventide, Strymon and Catalinbread. 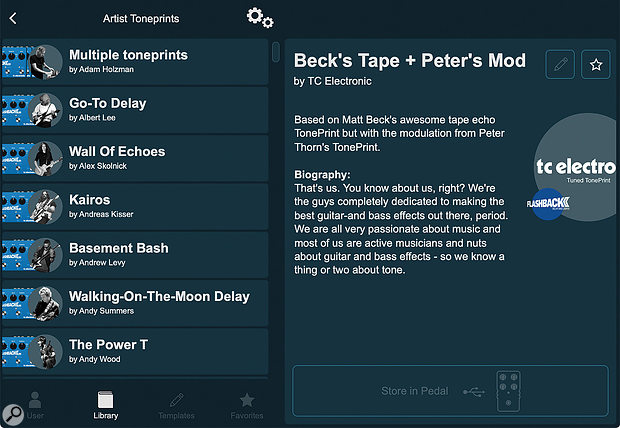 All versions of this delay support TC's free TonePrint app, which allows the user to customise the effects by importing new patches or accessing deep parameter settings that aren't accessible via the front panel. As well as using the Mac/Windows version, new patches can be loaded via a free TonePrint app for iOS or Android, the benefit being that this requires no connection; you only need the phone to be held close to the guitar strings to send data to the pedal. I've used it in the past, but sadly it's no longer supported by my antique iPhone 4 (which I will keep until it rusts!). So I tried out the Mac/Windows app, which connects via USB. The latest version is as easy to use as it always was, and it gives access to editable 'template' effects as well as artist presets.