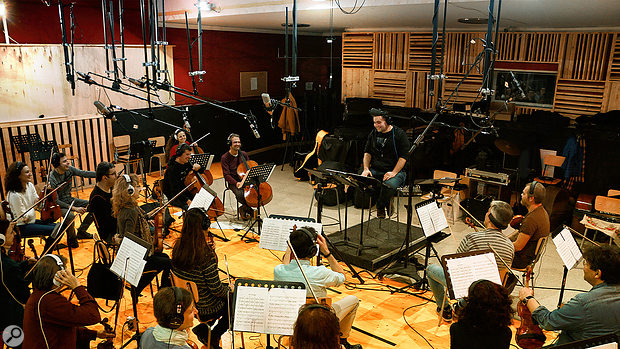 A large strings collection from Eastern Europe heralds a breath of fresh air.

Strezov strikes again. The man who brought us Wotan, Freyja and Arva choirs, Balkan Ethnic Orchestra and a host of other soundtrack-friendly instruments is back, this time with a large strings library which aims to cover an unusually broad range. It comprises (in its creator's words), "Lots of ensembles — from soloists, to ensemble quartet, to 50 players in unison. So you have everything that could suit the needs of epic trailer and period drama composers."

The idea behind the library was sparked by an awkward moment which occurred during the making of the Surviving Mars video game. Strezov's musical blueprint involved an innovative mixture of analogue synths and string chamber orchestra — Vangelis and Jarre versus Arvo Pärt, and may the best man win. The Bulgarian composer had used big, lush-sounding sound libraries on his demos, and when the producer heard the chamber strings players he worried that their smaller sound might imply a low-budget production. (Sounds like a classic case of demo-itis to me.) Thankfully the composer's creative vision prevailed, the chamber strings were retained and no-one got sacked.

This episode gave Strezov food for thought, as he puts it, "With very expensive string libraries you get tons of articulations, but only one sound." Hence, the inspiration to create a new multi-section strings library whose flexible instrumentation would effectively bridge any gaps between demo and final recording. Like Strezov's choir and ethnic orchestra titles, all samples in this collection were performed by members of the Sofia Session Orchestra & Choir and recorded in the large hall-like space of Sofia Session Studio from three microphone positions (see box below).

So, does it sound any good? The answer is a resounding 'yes'. This collection embodies all the qualities I look for in a string library, and seems perfectly tailored to produce fast musical results. To that end, patch names such as 'Heroine Strings' and 'Shark Strings' fast-track users towards specific cinematic styles, though instruments are also listed by articulation type. On the technical side, the makers claim, "We try to keep our instruments really simple and to the point so that you don't waste your time tweaking tons of knobs and sliders." That said, while all patches are playable straight out of the box, many contain additional features that offer deeper musical possibilities.

One unusual facet of this library is that rather than asking the players to perform an endless series of separate, disembodied notes (the musical equivalent of marching to Siberia), Strezov set out to capture samples in a realistic musical context. He explains: "The music they performed was specially composed for each patch of the ensembles, inspired by film and concert music classics — both in style and orchestration techniques. For instance, 'Shark Strings' was inspired by Jaws, so we composed a piece in that film's musical style. 'Scene d'Amour' alludes to certain well-known vintage scores, while 'Minimalist' is more contemporary. All these 'compositions' I did myself just for the sake of the sampling, including all the legato intervals, round robins, etc."

To my ears, this philosophy has paid off: the sections sound superbly lively and immediate, and I found several patches that inspired compositional ideas, which is probably the highest compliment I can pay to a sample library, and the reason I came into sample reviewing in the first place. 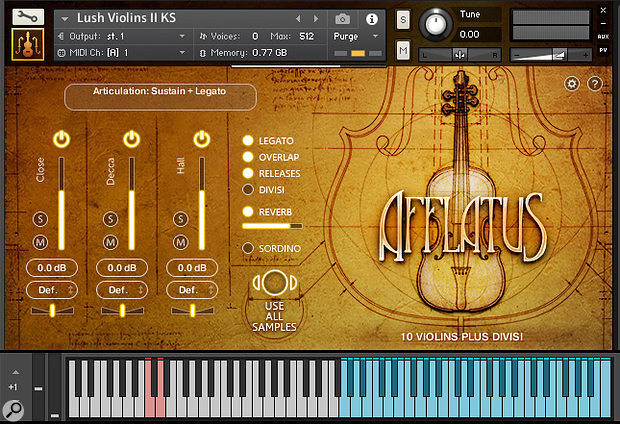 ACIS's largest ensemble features 14 first violins, 12 second violins, 10 violas, eight cellos and six double basses performing in unison across the entire strings' pitch compass, with instruments dropping out when notes fall outside their register. The 50 players can be heard pumping it out in the 'Le Sacre Strings Tenuto' and 'Red Army Strings Marcato' patches. Piling all violins, violas and cellos onto unison mid-range notes produces a sumptuous and massive section sound: the first patch (a 'molto espressivo' Stravinsky homage) has a beautiful timbre and mournfully expressive bowing style, while the marcato articulation features an emphatic attack and strong vibrato.

Altogether more violent-sounding, the aptly named 'Barbaric Strings Shorts' comprises octave cellos and basses played with sticks, abetted by spiccato violas and unison col legno cellos. Substituting sticks for the conventional back-of-the-bow col legno technique renders these samples viciously cutting and percussive — if they awaken your inner drummer, you can use the included body hit and slap samples to perform the 'boom baf, boom boom baf' intro of Queen's 'We Will Rock You'.

The zippy, forceful, short spiccato 'Psychatto Strings' style is one of the library's highlights, an excellent, combative and supremely playable articulation to take into your soundtrack battle and action scenes. I loved it. The samples are presented in high and low versions featuring respectively 11 violins and four violas recorded in unison, and four cellos and three basses in octaves.

In a more romantic mood, the 'Christmas Strings Legato' patch contains unison violas, cellos and (surprisingly) an alto saxophone, breathing out smooth, mellow sustains with a lovely soft, quiet dynamic. Con sordino 'Vintage' patches are another subtle and delicate timbre which works well for reflective music. Both of these styles blossom into a commanding and majestic loud tone when you push up the mod wheel. All in all, ACIS's ensembles offer an embarrassment of riches, spanning the emotional spectrum from tender to manic.