Turning to the individual sections, 12 first violins, 10 second violins, eight violas, eight cellos and six double basses each have a 'Lush KS' patch containing keyswitchable sustains and a vigorous tremolo. The sustains' built-in 'true legato' mode automatically selects the correct transition sample for intervals of up to 12 semitones, guaranteeing fabulously smooth melody lines: the legato is polyphonic, so you can switch between chords and single lines without changing articulation. Fans of the old-school monophonic legato can have it by switching off the 'overlap' option. Alternatively, you can turn off legato mode and play straight sustains.

The same section sizes (minus the basses) are featured in 'Impressionist' patches, which automatically generate trills when you play two simultaneous notes. This works for up or down intervals of up to 12 semitones, and sounds pretty realistic. The trill doesn't sound until you superimpose a second note over an initial held note, which can be a shock if you're not expecting it!

Having six basses in your arsenal guarantees some serious low-end firepower. These guys whip out great spiccatos and pizzicatos, including a ferocious, slashing take on the Bartok 'snap pizzicato' style. This also crops up in the 'Warrior Basses' patch, a great combination of Bartok snaps, timpani, percussion and random, Tourette-style male shouts. The sound-designed 'Trailer Basses' is similarly mega, combining double basses with turbo-charged cellos and violas which have been respectively pitch-shifted one and two octaves down. Roll over Beethoven!

This is a goodie. Though it takes a while to get your head around the idiosyncratic presentation, some of the patches in this collection are absolutely stunning.

For some, the words 'chamber string orchestra' evoke images of a small group of intensely serious classical musicians scratching out 'challenging' pieces by an obscure composer in a draughty church hall — in other words, no fun at all. I can assure you there's nothing scratchy about ACIS's chamber strings: their six first violins, five second violins, four violas and four cellos sections sound positively joyous, and the players perform their rich, vibrant sustains and legatos with fabulous dynamics.

Help text boxes are available to help you find your way round the GUI controls.Joined by two basses, 'Minimalist' sections of the same chamber-sized dimensions play very nice legato sustains, tenuto medium-length notes and harmonics. (The basses omit the latter, but you won't miss them.) The legatos' light flautando bowing is expressive and lyrical, perfect for intimate settings and sad, stately, slow-moving lines — a million miles from the astringent sonorities imagined earlier. The chamber violins, violas and cellos also perform their own handy short spiccato and pizzicato samples.

I was fascinated by the warm, romantic timbre of the small-section con sordino 'Scene d'Amour' patches— the use of mutes and sentimental 'molto vibrato' delivery reminded me of the strings one hears in 1940s movie soundtracks, an echo of the past so irredeemably vintage it almost sounds fresh! If you enjoy this muted tone, you can use the sordino button on the GUI to apply a simulated version to other patches.

Each of the five sections has a 'First Chair' principal player singled out to perform legato, pizzicato and spiccato solo samples. These patches are musically fine, and while they're not capable of reproducing the expressive performance inflections of a real player, they'll do fine for demos.

In a more soothing Western vein, I enjoyed 'Angelic Strings', which layers 14 violins with female sopranos and altos singing legato 'mmms' and 'aahs' — a great, lush sound for chord pads which benefits from impeccable tuning.

Satisfying media composers' perennial need for scary noises, ACIS includes the obligatory 'sul ponticello' tremolo bowing, a classic nervy articulation for ratcheting up the tension in suspenseful screen scenarios. The 40-player 'Avant Garde' patches feature cluster chords whose queasy detuning will help viewers enjoy the nasty moments of a horror film (someone should use these in a sig for Today In Parliament). If your soundtrack job happens to include scenes of children being menaced by giant slavering arachnoids, you're in luck — the creepy, progressively out-of-tune 'Arrival' and 'Spider' patches will provide the perfect accompaniment.

The library's collection of pads is presented in a single patch containing multiple presets.

When it comes to pads, there's one patch to rule them all. Sensibly named 'Pads', it comprises 46 presets created by sound designer/composer Lyubomir Goshev. Many take the form of an initial impact which subsides into a mysterious drone laced with disquieting sound effects — the sort of thing you could have quietly playing in the background to break the ice at a cocktail party. My favourites include 'Conan in Space' (detuned pizzicato bass bonks give way to ominous Death Eater wailings) and 'Goblin Minds' (massive timpani and orchestral bass drum hits evolve into a frightening drone enhanced by reverberant moaning and scuffling). The crazy, pitch-bent flexatone bells of 'Weird Dream', ghostly voices of 'Siren Song' and monstrous alien twang of 'Utopia' also floated my boat.

I was pleased to see these pads have separate mixer channels for their texture, synths, percussion and effects elements, which greatly expands their creative potential. Good work.

This is a goodie. Though it takes a while to get your head around the idiosyncratic presentation, some of the patches in this collection are absolutely stunning, and its wide range of timbres and styles, allied with the varied section sizes and some startlingly imaginative arranging ideas (I mean, violins and duduk?) will gladden the hearts of MIDI composers. In my personal star rating system (which ranges from one star for 'cheap and cheerful, OK for beginners' to six for 'excellent — recommended high-quality, top professional standard') this library easily rates a six, which means it automatically takes its place in my desert island sample libraries list.

By the way, 'afflatus' means a creative impulse or inspiration. Not many people know that — apparently it refers to the staggering and stunning blow of a mysterious new idea, with the word's etymology incorporating the notion of a divine wind which blows in fresh thought. I'm not sure which inspirational divine wind was blowing in Bulgaria when Mr Strezov conceived this library, but I wish it would come over here and blow into my music room.

Other string libraries with flexible section sizes include Audiobro's LA Scoring Strings, which presents 16 violins, 12 violas, 10 cellos and eight basses in a choice of full, half and quarter (two versions) sections and solo instruments. From the same producer, Native Instruments Symphony Series String Ensemble applies a similar approach to a 60-piece string orchestra, but has no solo instruments. 8Dio's Anthology also offers a degree of section flexibility, presenting its violins, violas, cellos and basses in full ensemble, a small chamber-sized group and solo instrument formats.

Recorded in the same studio as Strezov's Wotan, Freyja and Arva choir libraries, ACIS uses the same close, Decca (Tree) and hall microphone positions. The close miking is not completely dry, but bears faint traces of room sound; the traditional Decca miking reveals a very nice, classic strings ambience, while the hall mics sound more distant without being overly reverberant. The Decca and hall positions add body and size to the more astringent and focused close sound, and using all three together invariably produces great results — I also found the combination of close and hall very agreeable.

The library includes a custom convolution reverb which you can add to the close miking to create a bigger concert-hall sound. 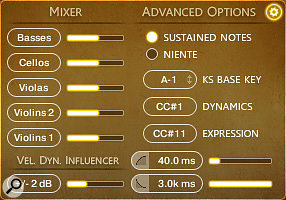 The Advanced Options window's deeper controls include MIDI controller settings for dynamics, expression and sustain pedal.A few years back the buzz phrase in orchestral sample circles was 'auto divisi'. The idea was that when you played a chord, the sample player software would intelligently assign its pitches to the correct sections. For example, the three notes of a simple C-major triad (C4, E4 and G4) would be assigned to (from the bottom up) violas, second violins and first violins. This mirrors standard arranging practice, and avoids the theoretical pile-up of player numbers that occurs when all the notes are played by a single violins patch, ie. 12 sampled violins playing three notes each equates to 36 virtual players, which is thought by some to be undesirable.

The 'auto divisi' tag crops up again in this library, but the implementation is not as described above: in ACIS, some patches have a built-in half-size 'divisi' section which you can switch to on the fly via a button on the GUI. The 'half section only' option purges the unwanted samples, thereby halving RAM usage and saving computer resources. Alternatively, there's a 'divisi' switch which temporarily selects the half section without purging the full section 'tutti' samples.

While it's useful to be able to instantly access a half-size ensemble, calling this feature 'auto divisi' is misleading — the selection is done manually, and there's no auto-arranging involved. Furthermore, the patches in question use MIDI CC#64 (sustain pedal) to switch on the 'divisi' half-section, which I think is a bad decision — it means you can't use sustain pedal in the normal way on these patches, which is a major handicap for a pad-oriented player like myself. Fortunately, you can re-enable sustain–pedal functionality by assigning CC#64 to 'sustained notes' in the 'advanced settings' tab and then re-saving the patch, but that's a bit of a faff.

If you fancy taking a crack at writing for the big screen (or even the small one), this library is an ideal tool. Featuring a wide range of string section sizes and solo instruments performing some knockout multisamples, its emotional range spans the cinematic gamut from Valentine's Day to Thor, with an emphasis on exciting spiccato chase and battle scene styles. It doesn't include phrases or licks, and won't automatically enable you to write music like Henry Mancini, Sergei Prokofiev, Bernard Herrmann, John Williams and Arvo Pärt, but it will certainly give you some of the string sonorities used by those guys in an instantly playable and entertaining form.