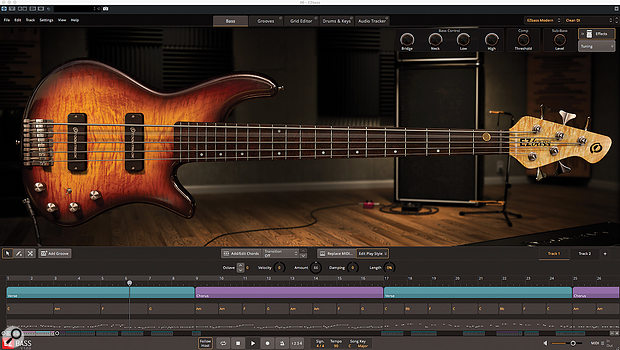 Toontrack have defined the cutting edge in terms of 'virtual musicians' with Superior Drummer 3, EZdrummer 2 and EZkeys. They caused a considerable buzz in early 2019 when they announced that EZbass was going to be the next in their virtual session musician line. The proposed feature list looked impressive and, like the other EZ titles, it promised a combination of a high-quality sample-based virtual instrument with a virtual player. The product has been eagerly awaited and is finally now with us. So, what's the low-down on Toontrack's new source of low end? Let's find out...

EZbass is presented in a slick, modern, SD3-style UI. Sonically, the foundation is a high-quality core sample set, built from two instruments, and covering vintage and modern electric bass tones. Finger and pick playing styles are covered, as are a comprehensive range of performance articulations.

Alongside the sample library is a large MIDI groove library covering a range of musical genres, a Song Track system where — like EZkeys — you can assemble a full chord sequence with multiple song parts. The UI allows you to fine-tune all sorts of aspects of the performance either for the whole song structure or just for selected sections. You can also dig right into the MIDI data itself with a very well-specified Grid Editor MIDI editing environment. Also included are the options for dragging both MIDI and audio into EZbass, and a range of tools to then create bass grooves from those sources. As with SD3, there is a 'Tap2Find' feature, allowing you to manually tap a rhythm and let EZbass search its groove database for the best matches.

Finally, while you have a comprehensive toolkit to add all the performance nuances you want, the workflow is slick; creating a complete, thoroughly professional-sounding and very musical bass performance can be done quickly. All in, this list of top-level features sounds very tempting.

EZbass's UI shares much with SD3. The top strip contains the usual array of main menu options, but also includes five tabs — Bass, Grooves, Grid Editor, Drums & Keys and Audio Tracker — that toggle the display between the major elements of the feature set. The top-right of this strip is also where you select and manage your sound presets. As with SD3, you first select a sound library (Vintage or Modern in the core EZbass library) and then a preset from that sound library. The lower third of the display contains the Song Track. This offers a three-lane timeline display that shows song sections, chord sequences and bass grooves, but there is also an impressive selection of tools for customising aspects of the performance.

As well as a modern look, the UI is also flexible. You get comprehensive re-sizing options and, if you want EZbass to fill your display, that's perfectly possible. Equally, if you have the necessary screen real estate, you can also separate out the five main tabs and float them as individual windows. In use, I certainly found floating the Grid Editor — EZbass's MIDI editor, with dedicated features specific to the instrument — to be very useful while still seeing my groove options and Song Track overview in the main window.

EZbass ships with two core sample libraries: Vintage and Modern. Both offer five-string basses, and both include a range of finger and pick played preset options. Sonically, Vintage provides a warm, smooth, tone, while Modern seems to offer both extended low-end and a nice dollop of bite in the upper registers. The DI presets for both libraries — in both finger and pick variations — are excellent, so you could easily add your own amp modelling of choice should you wish. However, other presets span a range of processed treatments, covering different amplified approaches, different levels of overdrive or distortion and different combinations of effects. One obvious gap is a fretless bass, although the Modern library does offer the 'Fretless Feeling' preset which has a fretless character to it.

The Effects panel offers a preset-specific set of macro controls to further customise the bass sound.

The Bass tab's Effects button (located top-right) pops open a number of macro-style controls specific to each preset, and that allow you to adjust the sound further from within EZbass itself. These are intuitive and flexible in use, but don't force the user to go full-on into detailed amp, cap and stompbox editing. MIDI Learn is available for real-time control and automation of these parameters. The Effects panel includes a Sub-bass control if you want to dial in even more low-frequency beef and this is impressively weighty. Multiple outputs are supported and, if activated, you can route the DI sound (outputs 1/2), amped sound (outputs 3/4) and sub-bass sound (outputs 5/6) separately to your DAW for further processing. Incidentally, there is also a Tuning button if you need to fine-tune how the instrument is pitched. 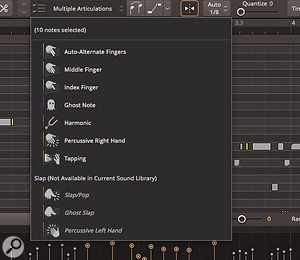 EZbass offers plenty of articulation options and, while these are already embedded in many of the grooves, you can fully edit how they are applied within the Grid Editor.On first audition, both the Vintage and Modern instruments impress with plenty of detailed dynamics sampling that responds to MIDI velocity. Play softly and the tone can be muted and mellow but play harder and things can get both louder and more aggressive; the response is very realistic. There is also an impressive array of articulation options for all the pops, slaps, slides, ghost notes and harmonics you might need to make a sample-based performance sound indistinguishable from the real thing. If you choose to use EZbass purely as a sample-based sound source — ignoring all the performance options — it's more than up to the task.

EZbass includes an extensive catalogue of 1000+ MIDI grooves that span a range of musical styles, feels (straight and swung), tempo and time-signatures. These can be browsed within the Grooves window and the content is sensibly organised into genre-based folders, with nested sub-folders based upon feel and time–signature, and finally into tempo-based 'songs', each with multiple song sections such as intros, verse, pre-chorus, chorus and bridge. Once you start browsing, each groove listed in the results panel includes a mini graphic that gives an indication of the rhythmic nature of the groove, the number of notes and the pitch variation, and this is very helpful in identifying the kind of groove you are looking for.

The core groove library is well populated with a broad selection of genre-based options.

While auditioning, the Velocity slider (located top-left) allows you to change how forcefully the groove is played and, when you drag and drop the groove (either to the Song Track or to your DAW), this velocity scaling is retained. This feature (which is also found in SD3's groove browser) is an example of the kinds of detailed controls available throughout EZbass and that make it so easy to humanise your final performance.

The Tap2Find and MIDI Drop Zone features also work as in SD3. With Tap2Find, you can tap in (and edit) a rhythm and then search the EZbass groove catalogue to find the best matches. Alternatively, you might drop a MIDI clip (for example, a drum pattern) from your DAW onto the Drop Zone and the same groove-matching process can be based upon that source. In either case, the results panel shows you a list of the suggested grooves and indicates the level of 'match'.

The only limitation to the search process is the library of grooves themselves. These certainly cover an impressive amount of musical ground but, as with EZdrummer/SD3 and EZkeys, I can only imagine that Toontrack will soon be tempting users with style/genre-based MIDI groove expansions to extend this core groove library.

Toontrack have completely knocked it out the park with EZbass. It is brilliant and will sell by the bucketload.