Expansion For EZbass By John Walden 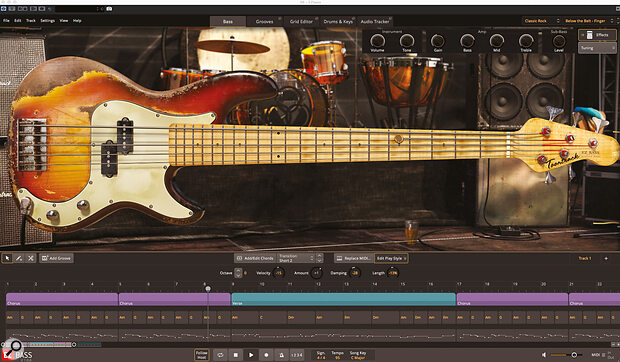 Having impressed on launch, it’s no surprise to anyone that Toontrack are now rolling out expansion packs for EZbass. The first of these — Classic Rock EBX — is a companion to the Legacy of Rock SDX and Classic Rock EZX for Superior Drummer and EZdrummer respectively and is obviously intended to deliver that classic ’60s and ’70s rock sound and performance style.

The instrument sampled here is a 1963 Fender Precision Bass and, while the core EZbass library includes an excellent Vintage Bass instrument (based upon a Fender Jazz Bass), sonically, the Classic Rock EBX does sit in a somewhat different space. It’s warm and present and, alongside some supremely solid DI sounds, the presets favour a more rock‑orientated set of amp tones with some very musical overdrive that responds beautifully to playing dynamics.

There is also a somewhat different approach to the presets reflecting the single pickup configuration so, as well as a set of finger‑played presets, you also get separate sets for the pick based upon striking positions either close to the neck or close to the bridge. And while this is ’60s/’70s‑inspired classic rock in terms of tones, you do get one welcome nod to the more modern bass‑playing world; in its virtual form, this 1963 Precision comes with five strings.

As with the EZbass core libraries, you also get an impressive array of performance articulations including up and down strokes, ghost notes, percussive hits, tapping, up and down slides and harmonics. All of these can be easily added within the EZbass Grid Editor for extra performance realism.

As with expansions for Toontrack’s drum products, the MIDI grooves might only account for a few MB of the overall content, but don’t underestimate their value. For the Classic Rock EBX, these come in a good range of tempos with a variety of straight, swung and shuffle options. Most are in 4/4 but there are also some 3/4 grooves present. They also span playing intensities, from sparse to busy, and complexity, from simple root‑note patterns through to more riff‑like or chord arpeggio‑based grooves. Many of the grooves include chord progressions but, of course, they will all follow whatever chord sequence you specify within the Song Track.

The Classic Rock EBX is a great debut and, personally, I can’t wait to see what Toontrack might have lined up next for the EZbass line.

The MIDI grooves are very inspiring to work with and, while they perfectly fit a broad palette of classic rock styles from the ’60s and ’70s, they could easily be dialled in to more contemporary musical contexts whose roots might lie in that classic era. Many of the grooves have suitable articulation options and chord transitions built into them; simply drag and drop a few to build a song structure, tie them in with some appropriate Superior Drummer or EZdrummer content, and you have an instant(ish) dollop of high‑class rhythm section ready to inspire your song writing. It’s a heck of a workflow.

Please Sir, Can I Have More?

As with SD3, EZbass ships with plenty of sound and groove content to keep you inspired for many a project. However, the Classic Rock EBX is a very tempting addition for any EZbass users who have musical roots in this classic rock era (that’s me then). The Classic Rock EBX is a great debut and, personally, I can’t wait to see what Toontrack might have lined up next for the EZbass line.

For non‑bass players, EZbass is a brilliant option and, as the first expansion, the Classic Rock EBX is well worth adding.