For such a versatile system, configuring the La Remote is remarkably straightforward. A web browser is used to access the La Remote configuration page in the main hardware unit. Any number of menu Layers can then be defined in addition to (or instead of) the default set, and a simple drag‑and‑drop paradigm is used to place the available functions from a list on the left of the screen directly onto the appropriate soft buttons in each layer.

There are far too many options to list them comprehensively here, but monitoring functions include mono sum, left‑right swap, and stereo difference options, as well as various surround downmixes with customisable contribution levels. A calibration reference level can also be established, sources can be selected exclusively or summed with others, output speaker sets and/or headphone outputs can be selected, individual speakers muted or soloed, and talkback and listen‑back activated to/from different destinations.

An unusually comprehensive bass‑management system is available when working with multichannel arrays, and Presets allow completely different setup configurations to be loaded almost instantly. One application of this is to load different speaker/room‑alignment parameters, optimising the reproduced sound for a sofa at the back of the room, say, instead of at the mix position, so you can impress the clients! And the cherry on top is the ability to load a (monochrome) company logo for display on the La Remote screen. 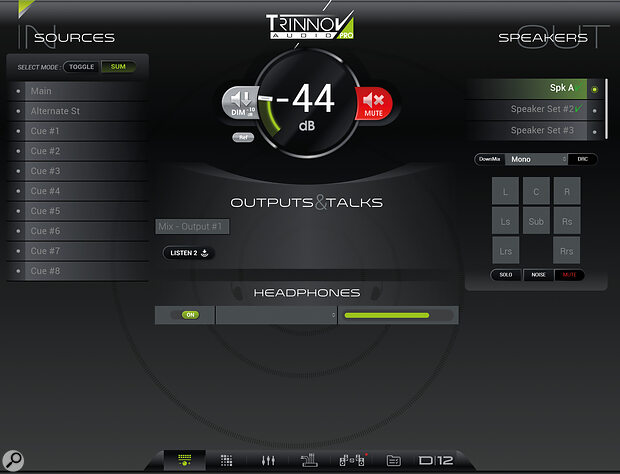 For those without a La Remote controller, the D‑MON units can all be controlled by a browser‑based app: this is the main one of several different screens.

I was very pleasantly surprised with the ease of installation and configuration, assisted greatly by the way it can be controlled remotely by the Trinnov gurus. The hardware is well‑built with plentiful mastering‑quality audio interfacing, and the highly optimised software is surprisingly straightforward to use; I rarely needed to dip into the comprehensive manual. 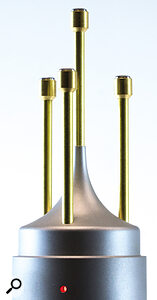 Unlike typical single‑capsule measurement mics, the microphone used in the Trinnov system is a tetrahedral array which allows the speaker positions to be calculated in 3D space.Most Trinnov systems ship with the dedicated, battery‑powered, multichannel calibration microphone, with its four miniature capsules emerging on stalks from the top. Its outputs are at line level and plug directly into the analogue line inputs of the Trinnov system when performing a speaker/room calibration, and when the mic’s serial number is entered into the calibration menu the Trinnov system automatically locates the relevant calibration file to ensure a precise alignment. Simple on‑screen instructions guide the user to perform various tasks in the alignment process (such as turning on and off the microphone at appropriate moments to avoid howl‑rounds)

As I was reviewing this unit during a lockdown and while in isolation, the remote‑control feature proved very useful indeed: I was able to converse with Trinnov’s UK agent over a Zoom call while he took control of my specific installation remotely, demonstrating the features and facilities in real time. He was also able to work through a first speaker/room alignment with me, explaining the pros and cons of the various customisation settings and options in the Trinnov Optimizer software as we progressed.

All I had to do was plug the D‑MON into my studio monitoring chain (in place of my usual Crookwood system) which involved re‑plugging four XLRs on a patchbay, and it was all completely configured and calibrated in well under an hour! I subsequently performed a couple of other room calibrations of my own, just for experimental purposes, and was very impressed with both the ease and flexibility to tweak and fine‑tune settings to suit personal requirements or speaker capabilities.

My ‘raw’ studio/monitor acoustic frequency response is pleasingly good, having a response comfortably within ±4dB above 200Hz, but with a narrow 6dB notch around 100Hz before a slow roll‑off reaching ‑6dB at 50Hz. With the Optimizer running that improved to ±0.75dB above 50Hz on the left channel and the ‑6dB point moved down to 30Hz. The right channel was virtually identical except for a narrow 4dB notch at 100Hz, something I eventually tracked down to the acoustic effect of the wooden side of a rack facing that monitor. A deep acoustic panel has been ordered to fit over it…

Due to the physics of analogue crossover filters, the phase response of my all‑analogue three‑way Neumann KH310s monitors involves a couple of trips around the phase circle, but the Optimzer software resolved that to within ±15 degrees above 100Hz, with a gentle rise below that to around +165 degrees (this being a practical compromise to avoid excessive latency through the DSP). The benefits of these corrections were also evident in the direct impulse response which tightened up dramatically, as did the first reflection from the desktop.

Given the reasonably good acoustic starting point I wasn’t expecting miracles from the Trinnov, but it didn’t take much listening to appreciate its significant benefits. The low end was noticeably smoother and usefully more extended, but also more precise in its timing and control. Stereo imaging was even sharper and more stable than before, and reverberation seemed more 3D and with greater depth. Bypassing the Optimizer didn’t leave me wondering how I could cope without it, but I definitely preferred to mix and manipulate sound with the processing active!

As a monitoring controller, the La Remote works very well indeed and I particularly liked the ability to place functions on different layers to suit my own ergonomic preferences and workflow.

As a monitoring controller, the La Remote works very well indeed and I particularly liked the ability to place functions on different layers to suit my own ergonomic preferences and workflow. Physically, the unit is practical and easy to use, the magnetic clutch on the large encoder giving a very pleasing tactile response. However, while the operation and configurability are perhaps 90 percent of the way to perfection, there are some important omissions in the present software that preclude my unrestrained praise.

For example, in a stereo monitoring system it’s possible to create downmixes to generate ‘mono on left only’, or ‘on both’ speakers, and even to create a stereo difference signal and to swap left and right channels. But I was unable to configure a simple right‑channel polarity inversion and, while it is technically possible to introduce a static level change to any input signal via the hardware configuration menus, I couldn’t find a way of doing that in real time from La Remote to allow a level trim to be applied to a source. This kind of facility is essential when comparing a reference signal to a DAW mix to rule out preferences due to overall loudness differences, and a common feature of high‑end monitor controllers. I raised these points with the Trinnov team and was told that they are already on the scheduled development list. Hopefully, they will be implemented fairly soon in a future software update as I see no physical reason why they can’t be introduced fairly easily.

With those updates and extra features in place La Remote would match the functionality and capability of the best high‑end stereo and surround/multichannel monitor controllers currently on the market, and that presents an intriguing quandary. While the D‑MON system might initially appear expensive, the introduction of the La Remote controller and its comprehensive monitor control features actually tips the balance quite positively in Trinnovs’s favour.

For example, a D‑MON|6 with La Remote and calibration mic costs around £7,740 (including VAT) here in the UK. In contrast, the high‑end Cranesong Avocet Surround monitor controller, which has broadly similar monitor controller functionality and audio quality, costs around £7,200. However, the latter has no speaker/room‑correction capability, of course, whereas the Trinnov system does, for just an extra £540. Adding Trinnov’s superbly effective and sophisticated speaker/room‑correction processing to a wonderfully capable and configurable monitor controller for that little feels something of a bargain to me!

I enjoyed using the D‑MON and La Remote system. It was simple to integrate into my monitoring chain, relatively fast to configure (with the benefits of remote interaction if necessary), remarkably versatile and customisable, and it improved the accuracy and resolution of my already pretty good monitoring chain significantly. This is a highly impressive system which I can recommend equally highly for anyone wanting to extract the last few percent of sonic perfection in a high‑end monitoring system.