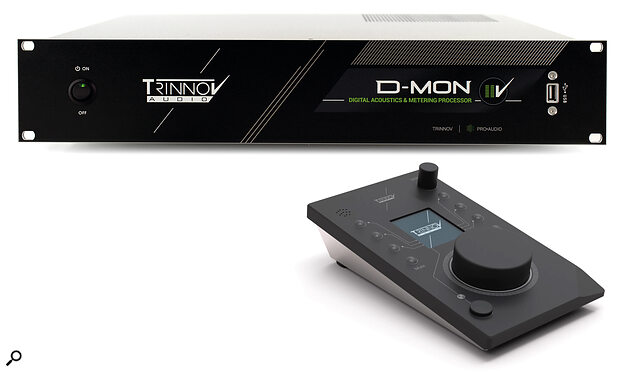 My first experience of Trinnov’s uncompromising approach to digital speaker (and room) correction was 15 years ago. There really was nothing else on the commercial market at that time to match its astonishing capabilities in such a practical and comprehensive manner and, although other manufacturers have narrowed the technology gap over the last decade or so, Trinnov’s current hardware and software implementations have raised the benchmark even higher. Back then there was just the Optimizer but today Trinnov offer a variety of hardware processors, each optimised for a different specific market: home‑theatre, hi‑fi, pro‑audio and professional cinema.

Phil Ward reviewed the ST2 Pro stereo model for professional studio applications in SOS July 2019 and was very impressed. As his informative review is available for free in the SOS online archive (www.soundonsound.com/reviews/trinnov-st2-pro) I recommend reading it for more in‑depth information about what Trinnov’s Optimizer Toolbox system does and how it does it; there’s little point me re‑treading that ground here. Suffice it to say that Trinnov’s systems correct both the amplitude and phase responses of the loudspeakers, with the aim of recreating the most accurate transient response at the listening position. This allows the most precise rendition of time‑dependent auditory cues, and the benefit can be heard as a much more focused and stable stereo image, and more realistic reverberant spaces.

The system can also rectify physical misalignment of speakers (particularly in multichannel arrays) by introducing compensatory delays and remapping the various channel signals between speakers, where necessary to generate the format’s intended sound field. It also corrects some room peaks, cancellations and primary reflections, but is clever enough not to make the matter worse by going beyond what is reasonable. Sophisticated facilities for manual system/room EQ are also included, along with comprehensive parameters to fine‑tune the application of calculated optimisation settings within the physical loudspeakers’ capabilities and to suit personal preferences.

System analysis is performed using a bespoke four‑mic tetrahedral array, which is included with most Trinnov systems. The spacing between capsules allows the software to determine the directional information needed to work out the precise locations of each speaker, and any strong acoustic reflections, in three‑dimensional space.

As you might expect, this level of sophisticated signal analysis and real‑time processing is substantially more demanding than can be delivered by typical digital speakers with integrated DSP, or even by room‑correction DAW plug‑ins — hence the need for the powerful dedicated hardware platform. Trinnov’s solutions are all based on custom (silent) PCs in an elegant 2U chassis, with rack‑ears for the professional models. They all run a Linux operating system, with the number crunching performed in 64‑bit floating point. A specially designed Trinnov Audio Core (TAC) DSP card handles communications between the PC and the mastering‑grade analogue I/O, as well as the digital audio, clocking and ancillary interfaces. AES3 digital I/O is also included as standard, while the largest systems use MADI, Dante or Ravenna interfaces.

The hardware processor can be controlled through a local mouse/screen setup, but more usually Optimizer installations are controlled either by VNC or a web browser — the computer contains both VNC and Web servers. With Internet access, the hardware can ‘phone home’ to Trinnov’s servers, from where it can be configured remotely by Trinnov boffins. That’s an extremely useful feature in such a sophisticated machine!

...this level of sophisticated signal analysis and real‑time processing is substantially more demanding than can be delivered by typical digital speakers with integrated DSP, or even by room‑correction DAW plug‑ins...

The majority of Trinnov’s systems are intended for use with a single loudspeaker array: to correct a standard stereo setup, a 5.1 surround system, or even a multichannel Dolby Atmos setup (the largest system can process up to 64 speakers in a single acoustic array). However, most professional studio environments employ two or three independent sets of monitors, possibly in different formats, too. Historically that would have entailed a monitor controller feeding separate Trinnov correction systems for each different speaker set.

The impracticality of this is not lost on Trinnov, though, and the subject of this review, the D‑MON, is specifically designed to work with several independent loudspeaker configurations in the same room, at the same time. It has been designed to control and switch between them just like a conventional monitor controller and, in fact, it’s probably best to think of the D‑MON as a fully configurable digital monitor controller first and foremost, that just happens to have sophisticated integrated speaker/room‑correction processing facilities built‑in!

Currently available in two versions, the D‑MON|6 and the D‑MON|12 provide either 6 or 12 Optimizer signal‑processing channels, respectively. So the D‑MON|6 can be used to control a single 5.1 array or three stereo sets of monitors, for example, while the D‑MON|12 can handle a 7.1.4‑format Atmos system (with three front speakers, two pairs of side and rear speakers, one sub, and four height speakers), or a 5.1 array and three stereo pairs… or any other combination that fits within the unit’s processing capabilities. All the speakers in the various monitoring arrays are normally analysed and aligned in one process, to ensure consistency at the listening position, but after that they can be controlled completely independently.

The D‑MON units have plentiful I/O on the rear, and can cater not only for monitor correction and switching but also artist cue mixes.

Beyond their six or 12 Optimzer DSP channels, both D‑MON hardware units include additional ‘uncorrected’ audio I/O channels. These are provided for additional input sources and for feeding separate (unprocessed) outputs for artist headphone cue mixes (with talkback, if required) or other ancillary signal paths. Consequently, the total I/O count of both units is significantly greater than the DSP channel count suggests. For example, the D‑MON|6 has four AES3 inputs and outputs (eight channels in each direction), eight analogue line inputs, and 12 analogue line outputs. The larger D‑MON|12 has eight AES3 inputs and outputs (16 channels), eight analogue line inputs, and 16 analogue line outputs.

In both cases, the hardware incorporates a full routing matrix, allowing any physical input to be routed to any physical output (with level changes, if required), as well as via the Optimizer processing. There’s also a versatile summing matrix (ie. a mixer) for generating artist cue mixes, monitoring downmixes, and so on.

I mentioned the D‑MON’s mastering‑grade converters earlier, and Trinnov’s specifications quote dynamic ranges of 119 and 118 dB (A‑wtd), for the A‑D and D‑A respectively, with the ability to work up to 96kHz sample rates. I ran my usual Audio Precision system measurements to confirm these specs, which place the D‑MON just outside the top 10 of my converter review tests to date. Similarly performing converters and interfaces include the Prism Lyra 2, Apogee Symphony, Cranborne 500R8, Mytek Brooklyn DAC+, the UAD Apollo and Crookwood’s M1 mastering console. So it’s fair to say that the Trinnov’s analogue signal path is at least as good as most mastering studios would require. Wordclock is provided on the hardware platform for sample rate synchronisation, of course, and there is also comprehensive interfacing for GPIO and MIDI, as well as integration for ICON and EUCON remote control protocols.

The Trinnov’s analogue signal path is at least as good as most mastering studios would require.

Although the D‑MON’s monitor controller features can be operated remotely via a web browser, or from an Avid console via Eucon, Trinnov have recently introduced a dedicated physical desktop controller called La Remote. This new addition makes the Trinnov D‑MON a really practical proposition for any mix or mastering room, not just those equipped with Avid hardware.

This USB bus‑powered controller is recognised as soon as it is plugged into the hardware unit but its configuration data is stored (and programmed) in the main hardware platform as part of the Optimizer software and uploaded to the La Remote during bootup.

With La Remote sitting on the desk or console, the D‑MON really becomes a ‘proper’ monitor controller, and once configured the speaker/room‑correction aspect becomes as transparent as the sound from the speakers themselves; the operational focus is entirely on the versatile La Remote which can be customised to suit each installation’s specific requirements. (For those with Trinnov ST2 or MC platforms, the La Remote unit can be used as a more basic monitor controller, with fewer facilities and customisation options than are available when connected to a D‑MON.)

Physically, La Remote is a pleasingly compact but surprisingly heavy wedge‑shaped unit, dominated by a monochrome LCD screen. Four illuminated buttons run down each side, and seven of these buttons are user‑assignable; the one at the bottom left always provides a master Mute function. An eighth assignable button, usually configured for either Dim or talkback functions, is located just below the large rotary encoder which serves as the main volume control. 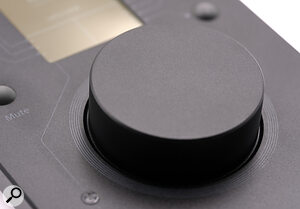 The La Remote’s encoder wheel’s resistance is controlled with a magnetic clutch that ensures good tactile feedback.The large rotary encoder is unusual in featuring a magnetic clutch system which makes it feel like a high‑quality rotary switch, with reassuring tactile feedback. A user‑selectable acceleration mode allows a fast spin to change parameter values quickly over a large range, while slower moves provide much finer resolution, and this all works very well in practice. The volume level of the currently selected speaker set is displayed in a banner across the top of the screen, either in a relative dB scale (gain/attenuation) or as an absolute dB C acoustic SPL value.

A second, smaller encoder, at the top right of the panel, selects different menu layers, with the default selection accessing basic monitoring facilities, output metering, configuration presets, networking parameters, and so on. However, pretty much everything is configurable and extra layers can be added as necessary. A talkback microphone is built in at the top left of the controller, and a USB B‑type socket on the rear is the only connection to the Trinnov hardware unit, which makes for a very neat installation.