Ueberschall tend to design their products so that they serve a very specific genre of music. Looptool is rather different, in that it covers all genres by sampling the content of a huge number of Ueberschall libraries. In fact, it would take up most of this review to list all the libraries involved, as there are about 60, covering as many as 50 Ueberschall-identified styles, each presented as a separate Construction Kit. 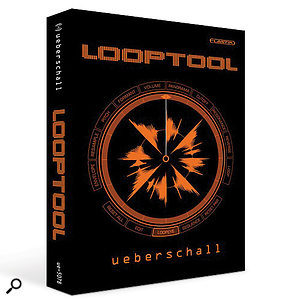 Most of the individual Ueberschall genre collections are close to 2GB in size, so it would be impossible for Looptool, which totals 4GBå, to offer more than a mere taster of the libraries it samples. But the point of Looptool is to provide a range of material for general use with Ueberschall's Elastik Version 2 software. That being the case, it is best to think of the Elastik 2 software as being a sampler and the Looptool content — comprising 2446 samples — as its standard 'sound bank'. Indeed, traditionally, synths, sound modules and samplers have always shipped with sound banks full of impressive presets, covering a variety of instruments and musical styles. Similarly, the Looptool sound bank attempts to cover all bases, leaving it up to the end user to buy specific genre libraries if they want more of a certain musical style.

Looptool wisely organises its content according to origin. For example, the '80s Punk & New Wave material is in a folder of the same name. Nevertheless, more general searches spanning all the kits can be made using the program's filters, such as Sample Type, bpm, Instrument or Key. Instrument, in particular, is a very useful search. Looking in the Keys family, for example, there are folders for organ, acoustic and electric piano, Rhodes, Wurlitzer and Clavinet sounds, to name just a few.

While Looptool isn't going to provide all the building blocks to make, say, a stereotypical glam-rock track, it includes just enough to get started. In that sense, it could be used as a springboard for ideas and demos. If, however, the aim is to explore new sound combinations, the library as a whole offers very rich pickings. For example, urban beats could be tried out with indie pop guitar and '60s bass, plus there are the sample-manipulation tools of Elastik 2 to call upon if necessary.

For some, Looptool might even cover too much territory. Rock, metal, hip-hop, punk and even country, to pick a few examples, all cross over nicely, but it could be argued that club R&B, house, trance, minimal electro, and other sequencer- and sample-based material, would be better organised into a separate collection. Then again, you never know what might come in useful.

But for anyone looking to get into sampling as a means of creating music, Looptool, along with the Elastik 2 software, seems like as good a starting place as any. Tom Flint