The Apollo 16 is an audio interface designed to bring UA's Powered Plug-in processing into the heart of a larger studio setup.

Early last year, Universal Audio launched an audio interface that incorporates the company's renowned Powered Plug-ins DSP platform, allowing input signals to be recorded and monitored through UA plug-ins with near-zero latency. The original Apollo, reviewed in SOS June 2012, combines nearly all of the features that are needed to set up a computer-based recording system, including analogue and digital I/O, microphone preamps and headphone outputs. However, UA have recognised that many buyers are attracted by the idea of an audio interface with built-in Powered Plug-in functionality, but would prefer to integrate such a device into an existing studio configuration and thus don't need built-in preamps, headphone outputs and so on. To meet this need, they have designed the Apollo 16, which dispenses with the original's preamps and headphone outputs, and instead provides 16 channels of balanced, line-level analogue I/O on DB25 connectors (wired to the Tascam convention). A further pair of analogue outputs on male XLRs provides a monitor feed, the level of which is adjusted in the digital domain using a rotary encoder on the front panel. The analogue circuit design has apparently been tweaked slightly compared with that used in the original Apollo, and the Apollo 16's outputs are DC-coupled, which is relatively unusual.

Reflecting the fact that such a product caters more to high-end users, the Apollo 16 is available only with the more powerful Quad configuration of DSP chips, and eschews the Apollo's ADAT and S/PDIF digital I/O in place of a single AES3 stereo digital input and output. A pair of MADI connectors is also present, but these are used only to connect two Apollo 16s together for 32-in/out operation. Two Firewire 800 connectors are built-in, with a blanking plate masking the slot where the optional Thunderbolt card can be fitted. All of the Apollo 16's functionality is packaged into a very smart 1U rack case, to which a chunky external power supply connects via a locking four-pin XLR. There's no cooling fan, so the Apollo 16 is silent in use.

Aside from the aforementioned volume control, the main features of the front panel are an on/off switch and a swarm of 10-segment LED meters. Two of these permanently monitor the main output pair, while the larger bank can be switched to display signal levels for all 16 inputs or outputs. These meters are impressively clear and bright in use.

Although the Apollo 16 features a pair of MADI ports, these are used only for sync'ing multiple units, so the only available digital I/O is the stereo AES3 in and out.

From the user's perspective, it would be perfectly possible to treat the Apollo 16's two main functions — audio interface and DSP plug-in host — as entirely separate. Treated thus, it would be no different from running a UAD Quad card alongside a conventional audio interface. The big selling point of the Apollo systems, though, is the ability to combine both these features, employing UA's Powered Plug-ins either in the record or monitor path with minimal latency. This functionality is accessed through UA's Console utility, an on-screen representation of a mixing console.

For situations where you're recording with the Apollo and you do need to monitor through your DAW, meanwhile, the latter's Settings window contains the usual options to set buffer sizes and so on. There's also a separate utility, which will be familiar to users of other UAD products, where plug-ins, DSP resources and Firewire bandwidth are managed. Once connected to my PC, the Apollo 16 just worked, and I didn't need to tinker with these settings. However, it's perhaps worth pointing out that you really do need a Firewire 800 connection to use the Apollo 16 to anything like its full effect, and that the Thunderbolt option is currently supported only on Macs.

The Console supplied with the Apollo 16 has been adapted to reflect its different balance of features compared with the original. Gone, naturally, are the controls relating to the Apollo's mic preamps; and in place of the Headphone buses on the Apollo, the Apollo 16's Console sports four stereo Cue buses which can be sent to independent output pairs. The two stereo Aux buses are retained (though you lose Aux 2 at 176.4 or 192 kHz sample rates) meaning that there's a total of six possible send destinations from each mixer channel, though only two can be displayed at any one time. Further sends on each Aux return channel allow auxiliary effects to be fed into each of the Cue buses, and the Auxes can also be routed to serve DAW inputs. So, for instance, if you place one of UA's very nice EMT Plate 140 reverb plug-ins as an insert on Aux 1, you can not only add different amounts of its output to each Cue mix for the performers to hear, but also print that reverb as a separate track in your DAW.

The Console utility has been adapted to reflect the Apollo 16's feature set, and now offers four Cue mixes. Like the Auxes, each input channel also has four pre-fader insert slots, into which any of the Powered Plug-ins for which your system contains a valid authorisation may be introduced. There are, naturally enough, 16 input channels corresponding to the Apollo's 16 analogue inputs; but on top of this, there are also eight Virtual input channels. These show up as output destinations in your DAW, and the point of them is to allow you to route signals originating in software through the Console. This could be useful in sessions where you want to combine real and virtual instruments without having to hop backwards and forwards between the Console and your DAW's mixer.

Prominently featured at the top right of the Console window is a rocker switch with Rec and Mon settings. In the default Mon setting, all channel inserts are placed only in the monitor path, and unprocessed audio is passed to your DAW for recording (though if you choose to record the Auxes, these are always processed by their inserts). In the Rec position, all insert effects are printed with the audio. To my mind, this global switching arrangement is rather limited, and it's not hard to imagine situations where you might prefer to have some channels' inserts recorded and others not. For instance, you might be running a session where your guitarist is playing through a UA amp simulator such as the Softube Metal Amp Room plug-in, which you want to print, while at the same time you want to use a compressor on the lead vocal, but only in the monitor path. 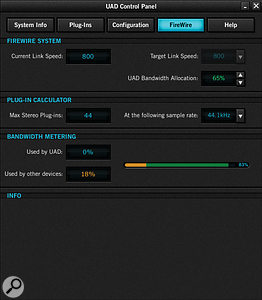 Any configuration necessary to optimise the Apollo 16 for your computer is handled within the Control Panel.

As has been documented in numerous SOS reviews, the range and quality of plug-ins available for the UAD platform is impressive, and the emphasis is firmly on emulations of vintage hardware. Having these plug-ins available almost latency free in the Console is great if your vocalist simply can't perform without that Roland Space Echo vibe, but the flip side is that, for boring people like me, there are also workaday utilities that are missing. There's no phase meter, spectrum analyser, tuner or test-tone generator. With no phase buttons on the mixer channels, you need to use a plug-in to flip polarity, and likewise, I could find no way to decode an M/S stereo signal within the Console without spending $329 on the mammoth Brainworx bx_digital mastering EQ. It's also not possible to see or adjust your DAW returns within the Console unless they are routed to its Virtual inputs.

However, the Apollo software does include one additional plug-in for your DAW that's not part of the standard UAD bundle. Console Recall does not process audio, but as its name suggests, allows you to store and recall Console setups remotely, as well as reproducing the Monitor controls from the Console. This has obvious uses in situations where you want to recall a Console cue mix along with a DAW session for overdubs and so forth. What you can't easily do is take a Console cue mix as the starting point for an actual mix once the tracking session is complete; assuming you haven't printed the effects when recording, you'd have to manually recreate the same setup, plug-in by plug-in, within your DAW. This arrangement contrasts with a system such as Avid's Pro Tools HDX, where the low-latency DSP mixer is integrated into the recording software, so any plug-ins used in your cue mix can be seamlessly carried over into the overdubbing and mixing stages. (And talking of Pro Tools, at the time of writing UA had not yet completed porting their plug-ins to the AAX format required to work with Pro Tools 11.)

I mentioned at the start of this review that the major selling point of the Apollo 16 is that it makes it easy to introduce UAD plug-ins into the record and monitor paths, with minimal latency. The Apollo Console utility feels as though it has been created mainly to facilitate this, and to extend UA's vintage aesthetic. It does this very well, being friendly and straightforward to use, but as described above, lacks some of the routing flexibility and practical tools you'll find in equivalents from the likes of RME or MOTU.

The floating meter window allows you to keep an eye on the Apollo 16's DSP resources at all times.

Universal Audio's Powered Plug-ins are hugely and deservedly popular; and considered purely as an interface, the Apollo 16 also ticks plenty of boxes. These include sound quality: I didn't have the opportunity to compare it against its direct rivals, but the Apollo 16 sounds very good, and its measured specifications for dynamic range and so forth are as good as it gets in this price bracket.

However, if you're a fan of the plug-ins but don't really need the ability to track and monitor through them in real time, it could work out cheaper to plump for one of UA's dedicated DSP cards and add a separate audio interface from another manufacturer. By way of example, if you disregard any difference in audio quality, Antelope Audio's Orion 32 and a UAD Octo card would give you the same I/O count and DSP grunt as two Apollo 16s, for quite a bit less money, while another possibility would be to combine a MADI interface with separate A-D and D-A converters. Some would argue that these options are safer from a future-proofing point of view, since they avoid putting all your eggs into one basket, and eliminate the Apollo's dependence on no-longer-cutting-edge (Firewire) and yet-to-be-adopted-outside-Macs (Thunderbolt) connectivity.

Ultimately, though, more boxes mean more complication, and if you typically record straightforward multitrack sessions where the main aim is to get a vibey sound together as quickly as possible, the appeal of the Apollo and Apollo 16 is hard to deny. The Apollo 16 is versatile enough to slot into many recording setups without unnecessarily duplicating their features, and offers convenience, compactness, excellent sound quality, decent metering and impressive value for money. Well tailored to its intended market, it provides a compact and effective option for small to medium-sized studios, and I'm sure it will prosper.

The Apollo 16 is another well thought-out addition to UA's range, which neatly combines multi-channel interfacing and DSP in a compact package.