Another slice of Abbey Road history is now available in your plug-in folder, thanks to Waves. 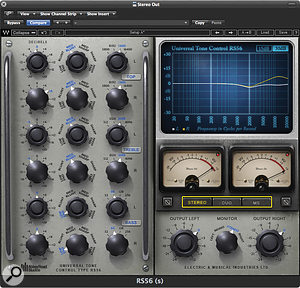 Although recording software now places any number of fancy parametric equalisers at our disposal, sometimes less is most definitely more, which is why old-style passive equalisers are still so popular. The RS56 is such a passive equaliser and was used in Abbey Road Studios in the 1950s as part of the vinyl cutting mastering process. In later years the equaliser found its way onto studio sessions as it was rather more versatile than the more routinely used 'treble and bass' tone controls fitted to most mixing desks during that era. While many passive equalisers have their own output amplifiers to compensate for the gain loss intrinsic to all passive EQ circuitry (which can be up to 30dB), the RS56 was entirely passive and so had to be used with an external amplifier to add the necessary gain, which in this instance was one of Abbey Road's V72 amplifiers as used in their REDD.17 and REDD.37 consoles.

Today Waves, in collaboration with Abbey Road Studios, have modelled the stereo version of the RS56, using circuit component modelling techniques based on data taken from the original circuit schematics. The RS56 plug-in features two channels of three-band equalisation, each band having a choice of four switchable centre frequencies and six different filter types. The two channels may be used independently, linked for stereo or employed in a Mid/Sides configuration. Like most Waves plug-ins, it supports all the familiar Windows and Mac OS plug-in formats, and is authorised via the Waves web site rather than to a hardware dongle such as an iLok.

The RS56 control layout is similar to that of a parametric equaliser, with each band having a cut/boost control, a switchable filter shape setting and a frequency setting, again switchable. Each band may be bypassed separately, and there's also an overall EQ bypass. Not everything is faithful to the original, however: whereas the hardware version could only offer ±10dB of cut/boost in 2dB increments, the plug-in version offers a maximum of ±20dB of cut/boost in 0.1dB increments, to give the user a finer degree of control. Make-up gain is also included, so you don't need a separate V72 plug-in! Another welcome concession to the 21st Century is an EQ curve graph; I wish more people who made 'faithful' recreations would add these, especially to passive EQs where some interaction between bands is inevitable.

EMI's designers clearly named their EQ bands before the term 'Mid' came into common usage, as the RS56's Treble band is really a mid-range control, offering four bands which are each an octave apart, at 512, 1024, 2048 and 4096 Hz. This octaves theme, where each frequency roughly corresponds to a slightly flat 'C' note, also extends to the low-frequency band, where the choices on offer are 32, 64, 128 and 256 Hz. The Top band looks after the high-frequency range, with switchable frequencies of 5800, 8192, 11600 and 16400 Hz. All the filter shape settings are expressed in terms of sharpness, with each shape knob labelled identically as Low End, Blunt, Med Blunt, Med Sharp, Sharp and High End. High End seems to convert the EQ from peaking to shelving, while Low End acts as a gentle cut or boost filter. In this mode, the operation is the opposite of a normal active EQ, in the sense that the cut/boost control causes everything not in the filter's range to be adjusted in level. In other words, if you want bass cut, you pretty much boost everything that isn't low end, so the whole signal level changes quite noticeably. The Treble and High sections operate as a high cut/boost when Low End is selected, whereas the LF control acts only on the low end. Not exactly intuitive I know, and it takes some getting used to, but then analogue equalisers are allowed their quirks!

Visual feedback comes from a pair of analogue-style VU meters that track the output levels. Below them are the buttons for Stereo, Duo and M/S operation, while three knobs at the bottom of the screen control the Left and Right output levels in Stereo or Duo mode or the Mid and Sides levels in M/S mode. A four-way rotary switch set between them allows you to monitor either channel, both channels or a mono mix of both when in stereo mode; in M/S mode the monitor choices are Mid Mono, Stereo or Sides. Each channel also has a polarity invert switch. VU Level Calibration sets the dBFS level that should appear as 0VU.

Although a three-band arrangement with stepped frequencies won't be able to tackle every problem, the RS56 plug-in captures the sweet, natural sound of a simple passive equaliser, making it ideal for general brightening, darkening or warming duties. In this respect it's rather like having a very nice console channel strip EQ. Even a small amount of cut or boost can make a big subjective difference to a sound, so it is unlikely that the full ±20dB range will ever be required, and I make no apologies for applying that over-used term 'musical' to this equaliser, because that's exactly what it is! I also found the M/S mode useful for fine-tuning the tonality of a mix without interfering with the vocals and other centre-panned sounds, so there's definitely a role for the RS56 in home mastering as well as mixing.

There's no reason not to use this equaliser in conjunction with a conventional parametric when you need to combine 'sweet and gentle' with 'surgical', and I found it just as flattering to a complete mix as to individual tracks. It has a wonderful Pultec-like ability to fatten bass parts without making the whole low end go flabby, which is great news when working on drums or bass instruments, and even when you get over-generous with the settings, there's none of that phasey lack of focus that sometimes occurs with active equalisers. If you already have a good Pultec emulation or similar you may be able to live without the RS56, but if you've yet to add a passive-style equaliser to your armoury, this one takes some beating, especially at the price.

There are now quite a few passive EQ emulations, including many based on the Pultec circuits, but as this plug-in recreates a very specific equaliser there are no direct alternatives that I'm aware of.

Three bands might not seem like a lot but the RS56 is a very sweet-sounding equaliser that is equally kind to the highs and lows. It is also very sensibly priced.