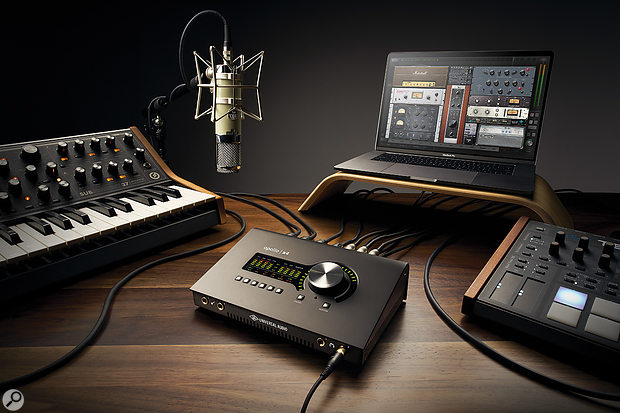 UA's new desktop interfaces give their rackmount siblings a run for their money.

When you buy an expensive item of studio hardware, you usually expect it to last. Mics and outboard processors half a century old remain the touchstones by which modern gear is often judged. In the world of audio interfaces, however, change is relentless, and yesterday's cutting-edge tools now gather dust in machine rooms. Of course, it's in the interests of manufacturers to have us replace our audio interfaces as often as possible, but it's also a process that reflects real technological development. Year on year, we expect better audio specifications, more DSP power and higher channel counts, not to mention compatibility with whatever connector Apple decide to put on their laptops this month.

Audio interface manufacturers thus refresh their product lines every few years to keep them in line with buyers' expectations, and 2018 saw Universal Audio update their rackmount Apollo range. Reviewed in SOS November 2018, the Apollo X interfaces feature state-of-the-art conversion and clocking, six DSP cores, built-in talkback, surround monitor control, Thunderbolt 3 connectors and friendlier I/O arrangements that reflect real-world use cases. Individually, there was perhaps no single headline improvement that changed the lives of Apollo users overnight, but together, these changes made for a pretty substantial upgrade. UA also introduced a new interface, the Apollo x6, which filled the gap between the desktop Apollo Twin MkII and the much more costly Apollo x8 and x8p.

Being only 18 months old at the time, the Twin MkII itself escaped the 2018 round of upgrades, but its turn has now come. The MkII was available in Solo, Duo or Quad configurations, with one, two or four SHARC DSP chips respectively. Apparently the Solo was the least popular of these, despite being the most affordable, and so the new Twin X is thus available only in Duo or Quad formats.

The two Twin X variants are identical in every respect apart from DSP grunt, and offer exactly the same I/O as was available on the Twin MkII (which already had a talkback mic, for example). There wasn't space in the Twin chassis to include the dual-crystal clock circuitry found in the rackmount Apollo X interfaces, but the benefits would have been less apparent in the Twin in any case, as its smaller dimensions and consequent shorter signal paths leave less scope for jitter to creep in. However, the Twin X does feature the updated converters found in the other X-series units, and now sports the Type‑C connector associated with Thunderbolt 3 rather than the older Mini DisplayPort socket.

There is clearly a growing market for premium interfaces that can handle critical recording tasks, and if you have that sort of money to spend, the Apollo x4 is a heavyweight contender.

Bigger news is the introduction of another new interface in the X series. The Apollo x4 represents a second intermediate stage between the Twin X and the flagship x8 and x8p, but this time in desktop format. About 50 percent wider than the Twin and sharing the same specs and control features, it's only available in Quad DSP configuration and, compared with the Twin, provides significantly more I/O. The x4 has four mic preamps to the Twin's pair, all implementing UA's Unison preamp-modelling architecture. High-impedance inputs for connecting guitars are available on the first two of these, and the Twin's single headphone output has been duplicated. On the rear panel, there are now two pairs of line outputs in addition to the main monitor outputs — meaning that, among other things, the x4 can be used to switch between three pairs of stereo speakers, though unlike the rackmount Apollos, it doesn't support 5.1 surround monitoring.

The Apollo x4's back panel squeezes in a generous selection of I/O. Headphone ports and high-impedance sockets are found at the front of the unit.

UA haven't felt the need to refresh the look of the Twin, and the new models are outwardly identical to the MkII in most respects; driver and latency performance is also unchanged. Removing the new interfaces from their packaging, however, reveals a mundane but very welcome improvement. The Twin MkII used a wall-wart PSU with a cable that was annoyingly short, and unless you happened to have wall a socket in exactly the right place, actually getting your shiny new desktop interface on to your desktop could be frustrating. Mercifully, this has now been replaced by a two-part line-lump affair more akin to a laptop power supply. It's at least twice as long as the old cable and if you wanted it to reach even further, all you'd need to do is replace the figure-8 mains cable with a longer one. I'd love to report that UA have also decided to supply Thunderbolt cables with their Thunderbolt interfaces too, but, well, they haven't. 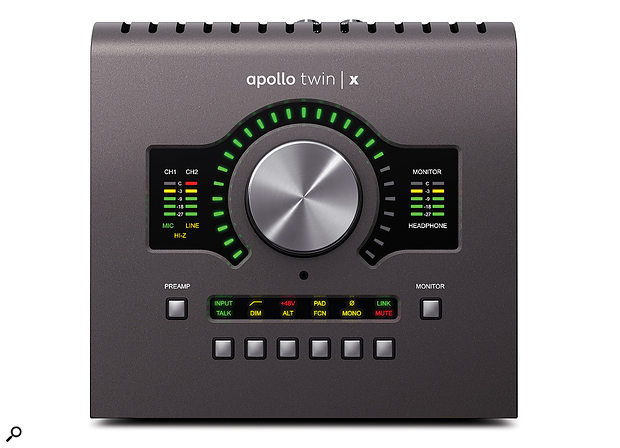 Physically, the Apollo Twin X is exactly the same as the Twin MkII...

Being more than 23cm long and weighing over 1.5kg, the x4 isn't something you can pop in your laptop bag, but it does cater to a number of recording scenarios that weren't possible with a Twin. As an example, many of today's stars bring an engineer on the road with them so that they can write and record in hotel rooms. The x4's additional headphone output will make it perfect for this role, allowing both performer and engineer to hear the takes as they go down. Alternatively, two guitarists could jam simultaneously through complex chains of UA plug-ins (see 'Channel DSP Pairing' box), while four mic inputs are sufficient to enable basic drum recording without an ADAT expander. With audio specs that match those of the rackmount Apollo Xs, there's no sense that the convenience of the desktop format comes with any performance penalty, and for many, I think this will actually be the preferred option over the x6.

Other than the power supply, there are few surprises on offer, but that's not really the point. There's obvious benefit both to UA and to new buyers in having the Twin be closely aligned with the X-series interfaces, even if there aren't any major new features that would justify upgrading from the MkII.

The new x4, meanwhile, is an interesting and, I think, a very shrewd move on UA's part. When desktop audio interfaces first appeared, they were usually budget affairs, but as more and more serious mixing and production is tackled 'in the box', we've seen a market open up for professional interfaces that diverge from the traditional rackmount form factor. There's nothing amateurish about the Prism Sound Lyra, the RME Babyface Pro, the Merging Anubis or the JoeCo Cello, but the most obvious rival for the x4's crown is Antelope Audio's Zen Tour. Similarly priced, this has broadly comparable I/O and audio specs that look very impressive, and can host its own low-latency effects and processors courtesy of Antelope's FPGA-based AFX system. There is clearly a growing market for premium interfaces that can handle critical recording tasks, and if you have that sort of money to spend, the Apollo x4 is a heavyweight contender.

Even those who don't update to the latest UA hardware benefit from the software improvements that are regularly rolled out. These always tempt us with more plug-in recreations of iconic hardware we can't afford, but the recent UAD 9.10 software also introduced some interesting new functionality.

One of the key differences between native and DSP-based systems is that the processing resources available in the latter are fixed. A DSP chip has a certain amount of memory and can perform a certain number of calculations in a given time frame, and each plug-in you load grabs a fixed share of these resources when you load it. This arrangement has the advantage of being inherently stable: because these DSP resources aren't shared with non-music tasks, the system can tell in advance whether there's enough juice left to run the plug-in you want to run, and it will continue to run reliably even as the DSP load approaches 100 percent. On the down side, however, it's also inherently inflexible. Not only is it not possible for a single plug-in to span multiple DSP chips, but in previous versions of UA's Console utility, this was also true of plug-in chains. So, to use a series of plug-ins on the same channel, they all had to run on the same DSP chip, and you could only have one chip's worth of processing per channel.

As UAD plug-ins have become more sophisticated, and especially now that there are more Unison plug-ins designed expressly for tracking purposes, this has become a problem in some contexts. For instance, some vocalists like to have their signal compressed and pitch-corrected in headphones, with a splash of reverb. If you were already using a DSP-intensive Unison preamp emulation such as the Neve 1073, and then you added Auto-Tune and a couple of other processors within the Console channel strip, you could easily exceed the resources of a single SHARC chip — and even if the other three chips were idle, they couldn't be brought in to help out.

UAD 9.10 software introduces a workaround for this problem called Channel DSP Pairing. In essence, a DSP Pair bridges two of the SHARC chips in an Apollo interface, allowing the creation of a single Console plug-in chain with twice the normal DSP resources available to it. However, individual plug-ins must still fit on to a single DSP, and DSP Pairs are not available on Aux or Talkback channels. A more significant restriction is that DSP Pairing effectively works by repurposing the Console mixer's Virtual channels, so for each DSP Pair you create, you lose two Virtual channels.

The Console still doesn't have DAW return faders, but another change in UAD 9.10 helps counter the all-too-common but annoying situation where the level of an input source is being drowned out by that of the DAW return: the Console faders now have 12dB gain above unity. This makes it easier to leave the appropriate headroom while recording, yet still achieve a workable balance of the live signal against previously recorded material.

When the Apollo Twin was first launched, there was plenty of clear water both price-wise and feature-wise between it and the rackmount Apollos. The advent of the x6 and now the x4 has narrowed that gap, but with both of these interfaces offering similar specs at around the same price, it might not be obvious which is the better option for you. The main differences are outlined below.

Compared with the x4, the x6 has an extra pair of line inputs and outputs, coaxial S/PDIF and word–clock I/O, a second Thunderbolt port and a second pair of optical sockets to support eight-channel ADAT recording at high sample rates. Its line-level I/O can be aligned for +24dBu operation, and its line and mic inputs have separate connectors. Its 'ladder' meters are also more detailed.

Lastly, the x4 has four Unison-enabled mic preamps to the x6's two, and the top–panel layout makes it a much more convenient monitor controller.

Universal Audio's new portable interfaces have specs to match their rackmount Apollo X units, and the x4 packs the I/O to handle a wide variety of tracking situations. The desktop interface is no longer the poor relation!