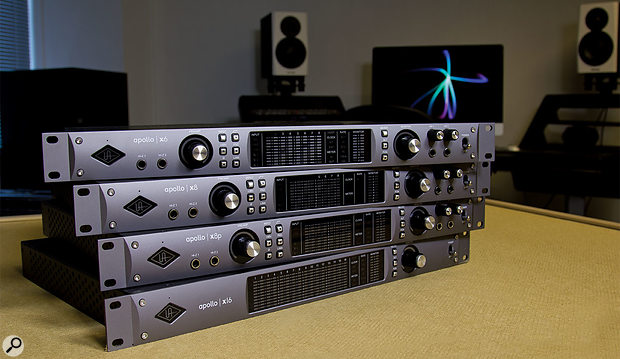 Universal Audio’s new Apollo X range sees the company pull out all the stops to best the competition — have they succeeded?

Over the last two decades, computer‑based recording and mixing has become completely ubiquitous. This trend has brought both challenges and opportunities for equipment manufacturers — and few companies have grasped the opportunities as fully as Universal Audio.

The original Universal Audio was established by studio owner, engineer and designer Bill Putnam, and produced many items of classic studio kit such as the 1176 compressor. The modern company of the same name was set up by Bill’s sons Jim and Bill Jr, originally with the goal of re‑making this vintage analogue equipment, alongside new designs such as the 6176 channel strip and 4‑710D mic preamps. Many software‑based studios have found a role for UA’s analogue gear alongside their Macs and PCs, but what has really put the company on the map is their own contributions to the computer recording revolution.

Jim and Bill Putnam realised early on that there would be a market for plug‑in emulations of vintage analogue outboard, and began recreating devices like the 1176 and LA‑2A for the Pro Tools TDM format. The next step was to develop their own DSP platform: a PCI card that repurposed a graphics chip to run audio DSP algorithms. This was superseded 10 years ago by a newer and more future‑proof product range employing Analog Devices’ SHARC DSP chips. Over the years, these UAD‑2 processors have been made available with PCI, FireWire, ExpressCard and USB connectivity, while the current range is dominated mainly by Thunderbolt devices.

Universal Audio’s ‘Powered Plug‑In’ platform has also been central to their hugely successful Apollo range of audio interfaces. Introduced in 2012, the original silver Apollos were 1U rackmounted FireWire devices, while a second‑generation of black units offered improved specifications and connected using Thunderbolt 2. UA have also introduced Thunderbolt and (Windows‑only) USB Twin and Twin MkII desktop interfaces, which can serve as monitor controllers in a multi‑Apollo system, along with the miniature, bus‑powered Arrow.

The Arrow and Twin MkII remain current products, as do — for compatibility with legacy systems — the original FireWire Apollo and the blackface Apollo 8 Quad. However, the other ‘blackface’ rackmount Apollos have now given way to a third generation of interfaces with grey front panels. The new Apollo X interfaces offer more DSP grunt, Thunderbolt 3 connectivity, even better audio specs and additional functionality, and to cap it off, UA have added a completely new model to the family.

The x8 has four standard XLRs for the mic preamp inputs, and eight separate quarter‑inch jacks for line‑level connections.

The Apollo x8, Apollo x8p and Apollo x16 are direct replacements for the Apollo 8, Apollo 8p and Apollo 16 respectively, all of them featuring broadly the same list of upgrades over their immediate predecessors. For many people, the most significant of these will be that all three devices are now available only in a ‘Hexa core’ configuration, with six SHARC chips, offering 50 percent more DSP power than the previous Quad versions. This is particularly significant in the case of the x8p, with its eight Unison‑enabled mic preamps; some of UA’s Unison plug‑ins are so resource‑intensive that using them across all eight preamps would pretty much max out the Quad version, but you can now have eight emulated Neve 1073s running alongside other plug‑ins.

Universal Audio have also pulled out all the stops as regards sound quality. There has never been a bad‑sounding Apollo that I know of, but other manufacturers have edged ahead of the silver and black units in the race to achieve ever‑better specifications. UA’s response is impressive: the Apollo x16, for example, boasts dynamic range figures of 124dB on its line inputs, 127dB on its line outputs, and a staggering 133dB on the stereo Monitor output pair. UA have also catered for professional users by adding the option to align these inputs and outputs to +24dBu rather than their predecessors’ +20dBu, and by making it possible to leave all the mic and line inputs connected simultaneously (see 'No More Sharing' box). And whereas most interfaces derive all clock signals from a single crystal, the Apollo Xs use independent crystals for 44.1kHz and its multiples, and for 48kHz and its multiples. This has made it possible to reduce jitter to less than 10 picoseconds.

The Apollo x16 boasts dynamic range figures of 124dB on its line inputs, 127dB on its line outputs, and a staggering 133dB on the stereo Monitor output pair.

The other major changes in these third‑generation Apollos concern ‘master section’ features. The monitor volume control in previous Apollos was a digitally controlled analogue device, which could be bypassed if the interface was being integrated into a studio with its own monitor controller. On the Apollo Xs, the volume control has been switched to the digital domain. In theory, this can have an impact on sound quality, because at low levels, you’ll be hearing what is in effect a word‑length‑reduced version of the output signal. However, given the amazing dynamic range figures quoted for the monitor outputs, you’d have to have a very odd monitor signal chain for this to be apparent in practice, and the key benefit of the change is that the Apollo Xs will all be capable of surround monitor control in formats up to 7.1, with speaker calibration and fold‑down. (I employ the future tense because this functionality was not implemented at launch: a software update should add it before the end of the year.) UA have also equipped all the Apollo Xs with a built‑in talkback mic.

All of the new models boast two Thunderbolt 3 ports, but this time around, they all employ USB‑C connectors rather than the mini‑Display Port sockets used on the previous generation. Windows operation is supported only over a Thunderbolt 3 connection, but Mac users can connect (as I did) from a Thunderbolt 1 or 2 socket using the appropriate wildly overpriced Apple adaptor. Needless to say, neither cables nor adaptors are supplied; this seems to have become the norm with Thunderbolt interfaces, but I’m going to carry on complaining about it until it isn’t!

The Only Way Is x6

The new addition to the range is the Apollo x6. In essence, this is a sort of Apollo ‘greatest hits’ package. It offers a carefully cherry‑picked selection of features from the other Apollos, designed to appeal to the project studio owner who rarely needs to do multi‑mic recording, but requires more flexibility, DSP power and analogue I/O than is available on the Apollo Twin. Like the Twin, it has two Unison‑enabled mic preamps, but these are joined on the rear panel by four further line‑level inputs on balanced quarter‑inch jacks, and on the front panel by two high‑impedance sockets for connecting guitars. On the output side, the stereo Monitor outs are augmented by six further balanced quarter‑inch line‑level outputs, and a pair of front‑panel headphone outputs. There are two optical digital inputs and outputs — although the second of these is present only to maintain the maximum eight‑channel count at 88.1 and 96 kHz (four channels are supported at 192kHz) — plus word‑clock I/O and stereo coaxial S/PDIF outs. And, like the rest of the Apollo X range, it includes a six‑core DSP engine.

Build quality seems excellent, as has been the case with all the previous Apollos I’ve tried, and I only have two minor niggles concerning the design of the Apollo X hardware. One is that, like previous Apollos, the new interfaces all require external power supplies; these at least are reasonably substantial devices that employ locking four‑pin XLR connectors to ensure they stay plugged in, but I’m sure most of us would rather use a good old‑fashioned IEC cable. The other is that although the 10‑segment LED ladders used to meter signal levels are admirably clear, I’m less keen on the circular displays that surround the Preamp and Monitor gain controls. These look as though they should offer a continuous measurement, but in fact are quite crudely stepped, and although the luminance of the topmost active step is varied to add some finer graduation, the result is that the readout just looks vague and imprecise.

As before, it’s possible to cascade multiple Thunderbolt Apollo and Satellite units of any generation, the limit being four of the former and six in total. For review purposes, UA supplied all four Apollo X interfaces in a single flightcase, cabled up and ready to go. On the plus side, this gave me a first chance to check out how UA’s drivers and Console utility handle an aggregated system with a large total I/O count. On the down side, if I require a hernia operation in the next month or so, I’ll know who to blame. Racked all together, the Apollo Xs also get hot, to the point where I couldn’t comfortably touch the front panels for any length of time; but this didn’t affect performance as far as I could see, and there are no internal cooling fans to kick in and ruin your takes. (Although they didn’t supply the review units this way, UA recommend that users leave a rack space between units.)

In any multi‑Apollo rig, one unit defaults to being the ‘master’; if you like, you can select a different master unit in the Settings dialogue of UA’s Console utility. Only the master Apollo can be used for monitor control and talkback. On slaved units, the stereo monitor outputs become conventional line‑level outs, and the ALT and FCN buttons are disabled. You can have up to two sets of alternate monitors, but these must be fed from line outs 1‑2 and 3‑4 respectively on the master unit, and cannot be reassigned to other outputs. The dedicated ALT button switches to the first of these alternates, and the assignable FCN button can be used to switch to the second.

By default, however, the FCN button is used for talkback, routing the talkback mic on the front panel of the ‘master’ Apollo to the Console utility’s Talkback bus. The button latches on if pressed and immediately released, and otherwise acts in momentary mode, which is pretty much how I’d want it to behave. It also automatically dims the designated monitor output, which isn’t necessarily what I’d want it to do, but at least the dim amount is configurable and can be disabled. The talkback mic can be routed into your DAW for slating takes and so forth, and even has its own Console channel with insert points for UAD plug‑ins. What’s not possible, however, is to designate any other source as the talkback mic; nor can you use a footswitch or MIDI controller instead of the FCN button. (The preferred solution is to buy an Apollo Twin MkIl to act as monitor controller and talkback source, since this can sit conveniently under your hand and has a dedicated talkback button.)