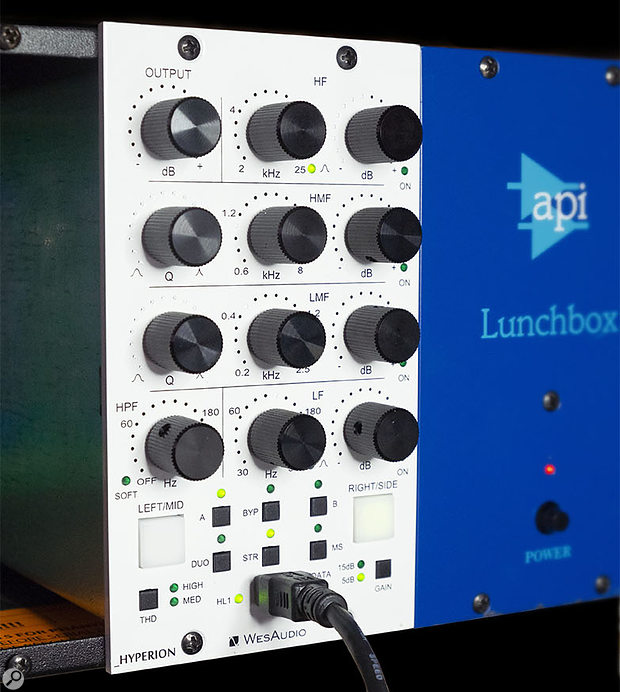 With full control and recall via a plug-in or the front panel, this hardware EQ promises full integration in a modern DAW-based setup.

Wes Audio are one of a small handful of innovative companies who are making possible the seamless integration of analogue hardware into a software DAW workflow. It’s something they’ve achieved by developing bespoke DAW plug-ins which control sophisticated 500-series analogue modules connected to the computer via USB. It’s a very elegant and practical solution. The 500-series module still works as a conventional stand-alone analogue hardware processor with front-panel controls, but it also functions as a fully integrated DAW plug-in, with all the associated preset and recall functions that go with that. Reloading a DAW project resets the analogue hardware exactly, and in an instant. All that is required is an audio interface with sufficient I/O with which to connect the hardware modules.

I’ve already reviewed the company’s two earlier products in this NG500 (‘Next Generation 500-series’) format: the Mimas FET compressor (SOS Jan 2016) and Dione VCA compressor (SOS Aug 2016). The latest addition to the NG500 family is the Hyperion, which is a dual-channel, four-band parametric equaliser with separate high-pass filter. It can operate in dual-mono and Left-Right or Mid-Sides stereo modes. As usual with Wes Audio products, this is a very high-quality analogue device with a claimed operating bandwidth extending between 10Hz and 150kHz (-2dB points), headroom up to +24dBu, and THD of 0.003 percent.

Accommodated in a double-width 500-series module the Hyperion draws 150mA per rail, and it features the company’s distinctive white faceplate with black function legends. Constructed in a U-shaped steel case, the surface-mount electronics occupy three circuit boards; one each for the left- and right-channel analogue audio in the main body of the module, and a third board behind the front panel for the digital control functions. Seven calibration trimmers on each analogue board are all sealed in position and the build quality is exemplary. 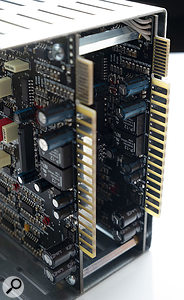 If you own Wes Audio’s Titan 500-series chassis, you can control the Hyperion via a computer with the additional card-edge connectors (top), instead of the front-panel USB port.The main controls comprise four rows of three touch-sensitive encoder knobs, supplemented with some configuration buttons below. DAW control is via the aforementioned USB connection. As you can see from the picture, there’s a front-panel USB port which can be used when the device is hosted in any standard 500-series rack. But when installed in the company’s own Titan rack, the module’s USB connection (like those of other NG500 modules) is taken care of internally, via an additional rear edge connector, and this keeps the front panel clear of external cabling.

The all-analogue signal path apparently incorporates no fewer than 18 THAT 2162 and 2181 VCAs in each channel to enable accurate digital control, either from the front panel or the DAW plug-in. The number of discrete parameter positions for the encoder knobs varies with the assigned function, most having 256 steps, but the LF and high-pass filter controls have 200 and 128 steps, respectively.

All of the controls are laid out very logically, starting with the overall output level as the first knob on the top row. The second and third controls adjust the HF band, altering the corner/centre frequency (2-25 kHz) and the cut/boost level. The gain range of both the overall output level control and the individual band gain controls can be switched globally between ±5 or ±15 dB, the former being very useful in mastering-type applications where modest tonal tweaks and ultra-fine resolution are important. So in the ±15dB mode, the encoder resolution provides an excellent 0.25dB per step, whereas switching to the ±5dB mode improves that to an astonishing 0.083dB per step!

As I alluded above, the HF band can also be switched between a bell or shelf response, achieved simply by pressing the HF frequency knob. In bell mode, indicated by a status LED next to the frequency control, the Q is about 1.1 (roughly 1.3 octaves bandwidth). Usefully, the HF band can also be individually bypassed by pressing the gain knob, with another adjacent LED indicating when the band is active.

Moving down to the second and third rows of knobs, these control the HMF and LMF bands, respectively. In addition to the centre-frequency and gain knobs, both incorporate a Q (or bandwidth) control which spans 0.2 to 3.2 (equating to 4.75 — 0.45 octaves). The HMF band’s centre frequency can be set anywhere from 0.6 to 8 kHz, while the LMF band covers 0.2-2.5 kHz. Again, each band can be individually bypassed by pressing the gain knob, and adjacent LEDs show when each band is active.

The first of the lowest row of knobs controls a high-pass filter, with the other two configuring the LF band, which can be switched between shelf and bell modes like the HF band. The LF band’s frequency range is 30 to 350 Hz, and the same press actions and LEDs are provided for the mode change and band-bypass functions. The separate high-pass filter is adjustable between 20 and 350 Hz (plus an Off position) and normally provides a 12dB/octave slope. However, pressing the knob changes the slope to a ‘soft’ 6dB/octave, indicated on an adjacent LED.

Arrayed across the bottom of the front panel are 10 buttons, with the two largest allocating the panel’s rotary controls to either the Left/Mid or Right/Sides channels when operating in dual-channel or M-S modes; the channels are ganged when operating in stereo, of course. A nice hidden feature associated with these buttons is that after holding one in for three seconds (until it starts blinking), the corresponding channel’s EQ settings can be copied over to the other channel, or into either of the A or B presets, simply by pressing the required destination’s select buttons.

Three buttons across the centre configure the equaliser’s operating mode, with options for ‘Duo’ (dual channel), ‘Str’ (stereo) and ‘MS’ (Mid-Sides), while directly above is a hard-relay-bypass button for the entire equaliser, flanked on either side by the A and B memory preset store/recall buttons. Naturally, all of these configuration buttons have associated status LEDs, while the large channel-select buttons are illuminated internally. Another hidden feature is that while these light white in normal use, they also flash red if the input or output signals approach clipping (full I/O metering is provided in the DAW plug-in).

Finally, two last buttons at the very bottom of the panel select the gain control range between ±15 or ±5 dB, as mentioned earlier, and adjust an interesting ‘THD colour’ option between off, medium and high settings. This function deliberately introduces some harmonic distortion for musical saturation effects, with the medium setting raising the THD to around one percent and the high mode pushing it to 2.5 percent — so the Hyperion can sound pristinely clean, or a little bit ‘meaty’ and ‘edgy’, as required.

As a stand-alone 500-series unit, the Hyperion does exactly what it says on the box — it is a very well-engineered parametric equaliser, which is easy to use and sounds very clean and accurate in its normal mode, with nicely overlapping bands and very workable control ranges. Selecting the ‘THD colour’ options adds some attractive body and fullness at the medium settings and more audible musical grit at the high setting, both being useful and attractive effects when appropriate for the source and production intentions, cleverly expanding the range of applications for this equaliser considerably.

The only aspect that surprised me slightly was how warm the module becomes during use — though this is noted in the manual. So maintaining good air flow through the rack will be important, and some care might be needed in deciding which modules to place alongside the Hyperion, in case they are heat-sensitive.

However, it is the Hyperion’s remote-control facility that sets it apart from most other 500-series equalisers, and I’m happy to report that — like Wes Audio’s previous NG500 offerings — the plug-in implementation works superbly. The partnering plug-in can be downloaded directly from the company’s website in versions for Mac OS (10.8 onwards) or Windows (7 onwards), both containing plug-ins for all three NG500-series products in AAX (and AAX DSP), VST2/3, and AU formats. Also bundled in the 210MB download file is a stand-alone configuration application called GCon, and the latest hardware firmware upgrades. The officially tested DAW hosts include Pro Tools 10.3.5+, Cubase 5+ and Nuendo 4+, Reaper 5, Studio One 3, Ableton 9, and Logic Pro 9 — but, essentially, any DAW platform that supports these plug-in formats should work with the Wes Audio hardware without problems. I did most of my testing using Adobe Audition on a 64-bit Windows 7 machine and experienced no difficulties whatsoever. 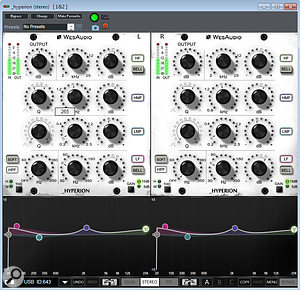 The control plug-in comes in AAX, VST2, VST3 and AU formats.The plug-in incarnation of the Hyperion looks very similar to the physical hardware, naturally, but differs in a few areas. For starters, as panel real estate isn’t a problem in a GUI, it gains dedicated buttons for the functions, which are activated by pressing the encoder knobs on the hardware unit. It also includes bar-graph meters for both the input and output levels (calibrated with the top zero of the meter equating to +24dBu), and unlimited preset store/recall memories. But a less obvious feature is the ability to operate linked channels with a fixed relative offset between channel controls — a most unusual capability but one which may be of particular benefit in some Mid-Sides applications. This is aided by the GUI showing both channels’ controls side by side. The hardware controls and buttons can also be used for real-time automation programming.

There is also a frequency amplitude graph at the bottom of the plug-in display to show the EQ responses, and the settings can also be manipulated by dragging nodes about, as in many regular EQ plug-ins. However, the frequency scale is very compressed at the low end, and this makes it difficult to adjust visually, and the amplitude scaling doesn’t change when switching between the ±5 and ±15 dB modes, which can be confusing at times.

My bench tests didn’t achieve quite the same results as the published specifications, but the performance remained very good. I measured a signal-to-noise ratio of 90dB (ref. +4dBu), THD of 0.01, 1.2 and 3.3 percent for the normal, medium and high THD settings (with an input of +4dBu and flat EQ settings). These figures are inherently very level-dependent, and reducing the input to 0dBu reduced the total distortion to 0.01, 0.8, and 2.3 percent, respectively. Crosstalk at 10kHz was -80dB, (ref. +4dBu) which is an excellent result. The frequency response measured -1dB at 15Hz and about 90kHz, and was within 0.5dB between 20Hz and 50kHz, so not quite as impressive as the published specs, but still a very good performance.

While plug-ins can be incredibly powerful, can sound fantastic, and offer the advantages of automation and recall, tweaking physical controls on analogue hardware often feels (and sounds) more natural and rewarding. But Wes Audio’s NG500 system genuinely offers the best of both worlds, in a very practical, elegant and effective way. Their Hyperion is a comprehensive and flexible 500-series analogue EQ which can be pretty much all things to all users. It not only does the standard clean EQ ‘thing’ very well — with a built-in Mid-Sides processing option to boot — but it can also be used to introduce some attitude and character where desired. Recommended.

Fellow Polish manufacturers Bettermaker also produce a digitally controlled analogue EQ for the 500 series, which hooks up to the DAW via USB in similar fashion. Outside the 500-series format, Berlin-based Tegeler Audio make a range of 19-inch rackmount analogue processors that again can be controlled via plug-in.

The third of Wes Audio’s enhanced 500-series modules provides a classic four-band parametric EQ with a separate high-pass filter, built-in MS mode, and a THD mode to introduce some musical distortion character. It’s usable as a stand-alone dual-channel/stereo hardware EQ, or remote controllable via a range of DAW plug-ins in all the usual formats.