World Impact: Global Percussion (12.2GB) contains around 270 percussion instruments from Africa, Asia, the Middle East, Europe, North and South America and Bognor Regis. (I lied about Bognor Regis.) Japan is represented by a 4GB set of multi‑miked taiko drums, ranging in pitch from tuneful shime‑daiko to thunderous nagado‑daiko. Played with a choice of beaters at eight dynamic levels, these taikos are a great resource, and their ambient room miking option adds a considerable amount of oomph. 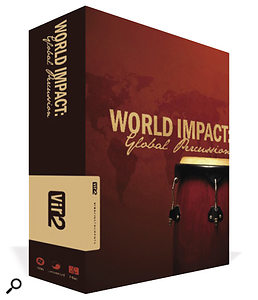 'Preview' patches make navigating this enormous collection a doddle; when you play a note, the instrument in question's name pops up on screen so you can immediately identify it. This helped me peruse a menu of over 100 drums and quickly assemble a truly international drum set consisting of a big, jingling Turkish frame drum, a Ghanaian kaganu, a small Indian kanjira drum and a Peruvian cajon. As an aid to navigation in the wider sense, instruments are also helpfully listed by geographical region.

Meat and potatoes items include a fabulous array of shakers, rattles and cowbells (including tasty African gankogwe), wood blocks, pop/Latin perc, and cymbals that feature some decent mallet crescendo rolls. These are supplemented by an equally large compilation of exotica such as Moroccan metal castanets, zills (finger cymbals), cluster bells and Chinese gongs. In a more esoteric vein, a 'hydraulic triangle' is dipped in water to modulate its pitch, and the excellent bowed vibraphone sounds like an eerie, disembodied pipe organ. A folder of bonus sound-design instruments takes the spooky direction a step further.

Inevitably, there are a few let‑downs: the waterphone sounds more like a watering can and the Caribbean steel drums are too strident. Unmusical programming has rendered the nice Indonesian gender metallophone samples virtually unplayable, and I missed hearing the urgent pitch‑bent 'gulp' that's an essential element of tabla drum performance. On the plus side, lovely high‑pitched Indian and Tibetan bells, tuned Swiss cowbells and a pretty set of Japanese temple bowls caught my ear. I also enjoyed the 'mouth percussion' patch, which features the best sampled sniff I've heard!

The mainly single‑hit samples can be animated by special 'trigger keys' that play automated rolls and user rhythm patterns. My only complaint is that the instruments' response sometimes felt a little sluggish due to slightly sloppy sample‑trimming; however, that's easily rectified and didn't stop me having an indecent amount of fun playing this fine collection of world percussion.

Kontakt Player software is included. To run the library on the full version of Kontakt you'll need Kontakt version 3.5 or higher. However, I experienced severe patch loading problems in Kontakt 4.11, which the makers say is due to a Kontakt bug. This has allegedly been fixed in a 4.2 update, unavailable at the time of writing. Dave Stewart