I've had great results miking up my little Vox AD30VT guitar amp, and the VT40+ reviewed here is Vox's second upgrade to that model. This range of amps is so useful in the studio because their sound is virtually independent of the output level: there's a separate Power Level control, so if you want to get a big sound while driving only a couple of watts into the speaker, you can. These amps also include a speaker‑emulated headphone output that can be used for DI recording, and this mutes the speaker, which can be very handy in a domestic recording setup. 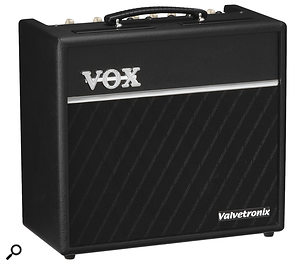 The VT40+ has an increased maximum power output, but follows the same compact physical format as the previous models, and it still employs a single 10‑inch speaker, though this has been redesigned for higher power handling. All of the mainstream amplifier technologies are used: the preamps and effects are all digitally modelled; the power amp is a tiny, low‑power, valve affair, comprising a single 12AX7 dual‑triode valve driving a simulated speaker load (that switches from Class A to Class AB depending on the amp model); and then there's a solid‑state power amp to bump up the output from the Valve Reactor power stage to a maximum of 60W.

The number of amp models has increased (there are three variations on each of 11 amp types), and these are augmented by 11 stomp‑box effects, 11 modulation/delay effects, and three types of reverb. All three effect sections can be used together in addition to the in‑built noise gate. There's a useful range of presets, and eight user memories, which can be recalled from the front panel or via an optional footswitch. There's also an integral guitar tuner.

This little amp turned out to be very versatile, and although I tend to favour the AC30TB model on my own amp, I found the other models to be rather more usable, both down at the cleaner end of the scale and up at the filth‑metal end. The stomp compressor worked well to bring out that country twang, and, laid on more thickly, to deliver a clean sustain, and the acoustic setting used with one of the clean amp models provided a passable imitation of a DI'd acoustic guitar with an under‑saddle pickup, albeit with a little background noise. There are several useful overdrive and fuzz emulations, including a model of Brian May's famous treble booster, and while I'm not a huge fan of pitch effects, stepping through the options produced some useful intervals and octaves, as well as a very sweet detune setting.

Whether you choose to use the effects, use your own pedals, or process after recording using plug‑ins, this little amp works really well in the studio, particularly if you're prepared to use a mic, rather than go for the DI option — though the latter doesn't sound bad if you need to keep the levels down.

The amp makes the right sounds at sensible levels, and it's adjustable enough to do some serious tone shaping without making life complicated. It has a rather less loose‑sounding bass end than the AD30VT that I still use, and I preferred its general tonality to that of the VT30 model, which I found sounded a hint 'unyielding'.

Like all the other Vox Valvetronix amps, this one is particularly good at handling a gentle, blues‑style breakup, and if anything, that's been further improved on this model. The revised choice of effects and reverb settings adds to the usefulness of the amp, as does having those eight user memories — so given that the VT40+ costs little more than some stand‑alone overdrive pedals, I have no hesitation in recommending it for studio work, pub jam nights and even small gigs. There's also a slightly smaller VT20+ if the VT40+ is louder than you need, as well as larger models that are better suited to gigging with a band.  Paul White