Ensemble Pro opens up VSL's hosting technology to third‑party instruments and allows 32‑bit and 64‑bit Mac and Windows systems to communicate over a network, spreading the software instrument load. 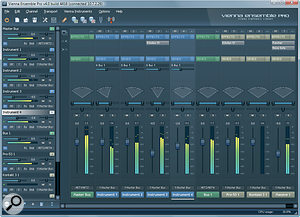 One of the biggest problems when working with software instruments, in my experience, is that one computer is never enough. And while the answer of adding another computer to your rig may seem obvious, it is often anything but simple. A common approach is to use an application specifically designed for hosting plug‑ins on your additional machines, since running a fully featured sequencer brings to mind sledgehammers and nuts. But it's often hard to find a host application that does everything you want, and even harder to figure out the complexity of routing audio and MIDI between your extra systems.

Vienna Symphonic Library (VSL) are well known for their sampled orchestral instruments. VSL originally made their libraries for other samplers, but later created a custom playback engine and released the Vienna Instruments plug‑ins. These plug‑ins enabled musicians to employ VSL's instruments directly in their sequencer of choice, but also placed the entire burden of running the instruments on the sequencing computer. Even putting aside processor requirements, orchestral libraries tend to be rather demanding on memory and one computer often struggles. So in order to make it easier to run these plug‑ins across multiple computers, VSL launched their own host software in 2007: Vienna Ensemble.

Over the last couple of years, Vienna have been steadily improving Ensemble. Among the most eyebrow‑raising features added has been the support for network‑based MIDI and audio routing. However, one request from existing and prospective users alike has been for Ensemble to support third‑party instrument plug‑ins. And that's exactly the request that's been answered with Vienna Ensemble Pro. 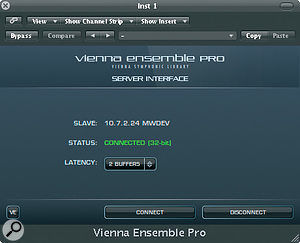 Like the Vienna Instruments libraries, the Ensemble Pro application is copy‑protected using Syncrosoft's eLicenser technology, which is now owned by Steinberg. Three licenses are provided, and this means you can run Ensemble Pro simultaneously on three computers in addition to your sequencer (the plug‑in itself isn't protected). You'll need to already own Syncrosoft dongles in order to use these licenses, and while this might not be a problem for VSL or Steinberg customers, it does add an extra expense for those not already using Syncrosoft‑protected products. VSL offer their own rebranded dongle, the Vienna Key, and this is available either from retailers or from VSL directly at a cost of 29 Euros$39. 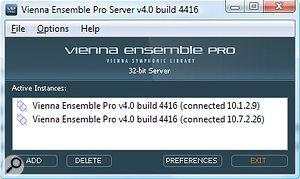 Getting started with the networking aspect of Ensemble Pro is easy. After running the installer on all the computers on which you want to use the software, you can launch the server on one computer and then connect to it by using the plug‑in on a different computer on the network (or, indeed, the same one). Each plug‑in you add in your sequencer communicates with a different instance of Ensemble, and a nice touch is that one server can support multiple Ensemble instances. This can be useful in two ways. Firstly, you could have different instances for different types of sounds: one plug‑in communicates with a string set while another connects with a brass set, for example. Secondly, you can have two computers connecting to the same server, sharing the same set of Vienna Instrument libraries and plug‑ins.

Perhaps the best thing about using Ensemble in this way is that the settings for an Ensemble instance are stored within the corresponding plug‑in. This means that if you close and re‑open a project, the host will automatically recall the setup, saving you from having to manually load and save setups on your different computers — which is pretty neat. If you don't want an instance to be unloaded when you close your current Project, there's a handy Preserve button. When enabled, that instance will stay preserved, so you can connect to an existing instance rather than having to start from scratch when starting a new sequencer project. 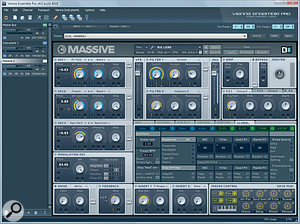 Once you have an instance of Ensemble Pro established on the server, you'll see the application interface appear. Currently, this interface is only accessible on the server computers; the plug‑in just displays the connection details, not the Ensemble interface for mixing and instrument control. A nice touch is that it's possible to control certain parameters of Ensemble's mixer from the automation in the plug‑in, such as the volume, pan and first four send levels.

The interface consists of two key areas. There's a vertical channel list on the right, listing every instrument, plug‑in and bus on the mixer. The main part of the interface shows either the editor for the currently selected instrument or plug‑in, or the Ensemble Pro mixer. The interface has a pleasant, dark aesthetic and is quite intuitive to use. The channel list handily offers shortcuts to almost every control for a channel, from routing to inserts and sends, and my only slight quibble is that it might have been nice if there was better visual contrast between channels in the list. A long channel list can easily become a sea of darkness.

Each instrument or plug‑in channel can be assigned a MIDI input port and channel. Eight MIDI ports are available per Ensemble instance, although these can only be fully utilised for each instance in network mode if you're using the VST3 version of the plug‑in. Each instance can support 16 audio outputs by default, and although you can use more than this, VSL warn of stability issues with some host applications. However, using the VST3 Ensemble Pro plug‑in, I had no problem accessing 64 outputs with Cubase 5.

Each channel can make use of insert effects — VST and Audio Units plug‑ins are supported — as well as sends to outputs or buses on the Ensemble mixer. This means you could use one of the audio outputs from Ensemble as a send back to your sequencer, incorporating further mixing and processing. Each channel also offers both a regular balance panner and a power panner, allowing you to make the stereo field narrower, or completely mono if you wish.

You can also add input channels to the mixer, enabling audio to be routed from the inputs of your hardware into the Ensemble mixer. But this only works in stand‑alone mode; in network mode, there are no audio inputs available. This is perhaps a shame, since it would be great to run effects in Ensemble and route audio from your sequencer. Maybe this would require too much workaround complexity to be convenient. Input channels are still useful in network mode, though, since they also allow additional outputs from multi‑output plug‑ins to be accessed.

One particularly nice feature of Ensemble Pro when using its network mode is that plug‑ins are able to receive correct timing information from your sequencer. It's hard to over-stress how important this can be, especially when it comes to tempo‑sync'd LFOs or delays. Other hosts I've tried over the years have no way of doing this, or have to rely on MIDI Clock, so it was incredibly exciting to see that VSL managed to implement this support.

Finally, I should mention that while Ensemble Pro supports most third‑party instrument plug‑ins, some are known to be incompatible at this time. There is a list on the VSL web site, and plug‑ins that are currently known to be problematic include the Virus TI plug‑in, along with instruments powered by East West's Play and Garritan's Aria engines.

One of the best things about Ensemble Pro is that can potentially solve so many problems. It can be a way of running plug‑ins on other computers, it can be a way of running 32‑bit plug‑ins with a 64‑bit host, and it can also be a way of using VST and Audio Units plug‑ins with Pro Tools on a Mac. At £165)$299, Ensemble Pro might not be the cheapest host available. But when you consider the flexibility, the networking, the cross‑platform nature of the product, and the fact that you get three licenses — not to mention the included Epic Orchestra collection (see the box at the top of this page) — the price starts to look like good value.

If you're running the Ensemble Pro plug‑in and application on the same computer and you're a Windows user, you will obviously need to be running a 64‑bit OS for such mixing and matching. Mac users don't have to worry about booting Snow Leopard 64‑bit kernel right now, since the default 32‑bit kernel offers support for 64‑bit addressing. But, thanks to the network mode, there's no problem in mixing and matching computers with different operating systems, making Ensemble Pro exceedingly flexible.

Anyone who purchases Ensemble Pro will also receive a free VSL sample pack: Epic Orchestra. Rather than trying to be down wiv da yoof culture, the word epic in this case refers to the style and acoustic majesty of the instruments. Think of a Jerry Bruckheimer film soundtrack — almost.

The string ensemble patch combines violins, violas, celli and basses into one instrument, and includes a number of articulations, such as sustained, staccato, tremolo and pizzicato. Similarly, a woodwind ensemble patch with sustained and staccato articulations employs flutes, clarinets, bassoons and a contrabassoon. The strings aren't bad, but the woodwind patch is rather reminiscent of those normally found on keyboard workstations.

A few solo instruments are also provided — oboe d'amore and cornet — with sustained and staccato articulations, plus Vienna's arduously‑sampled (but very playable) legato mode. And you also get two brass patches — Epic Horns and Fanfare Trumpets — again with both sustained and staccato articulations. The trumpets are nice, and the horns have a tasty bite.

Rounding off the collection is a timpani with both single hits and rolls, plus a percussion patch comprising a miscellany of useful orchestral percussion.

Epic Orchestra is a welcome treat. It offers a great introduction to VSL's Instruments if you're a newcomer or require only a simple orchestral palette. But since existing Ensemble users can upgrade to Ensemble Pro for free, Epic Orchestra isn't included with such upgrades. VSL's web site offers it to existing users who upgrade to Ensemble Pro for 65 Euros. However, this offer was reported to end on October 31st, so you will need to check with VSL on the status of the offer by the time you read this.

If you're looking for a way of hosting instrument plug‑ins, Vienna Ensemble Pro is a great solution, even if you're not already a VSL aficionado.