Ueberschall seem to be on a bit of a streak when it comes to Electro libraries: hot on the heels of the Elastik‑based Club Electro (reviewed in November 2009) and the Liquid Instrument‑based Electrolines (reviewed in December 2009) comes Minimal Electro Vibes. This is also an Elastik library and, like, Club Electro, the material on the DVD is organised into a series of construction kits. There are 20 construction kits in all, spanning some 1.5GB of sample material. Readers wanting more on the Elastik front end should see the review of 60s A GoGo back in the July 2007 issue of SOS, but let me just say that it provides a very efficient means of integrating a loop collection with other things going on in your DAW. 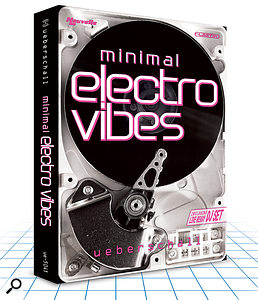 For reasons known only to the producers, all of the construction kits are named after rock‑forming minerals (although this is probably preferable to a series of clichéd dance titles, I suppose). Usefully, though, the titles also include the original key and recording tempo. The latter don't stray from the dance‑friendly 120‑130 bpm range, but will work quite happily at slower or faster tempos. As with Club Electro, each construction kit provides a combination of loops covering drum and instrument layers. While each kit only contains a single musical idea, there are generally plenty of layers, so it is easy to create some variation depending upon how you combine what is offered. Most of the kits also include some single drum hits, so you can build additional drum parts using the same basic sounds. The basic volume/pan and filter options built into Elastik provide some further possibilities. All the sounds — drums and synths — are suitably analogue sounding.

The 'minimal' in the library title is appropriate as, in general, the kits are less busy than those in Club Electro. In the main, this means an emphasis on rhythms and moods rather than dominant lead lines. This is not necessarily a bad thing as you can either stick with the minimalist vibe or add your own lead line or vocal to create a more obvious melodic focus. In terms of styles, the some of the kits could easily fit a classic '80s electro mood (for example, Opals, Pearl or Rose Quartz). In contrast, many kits have a more modern edge, such as Sapphires, with its more contemporary rhythms, Smokey Quartz, with a club‑style kick drum, or Agate, which features a 'skippy' rhythm. While the bulk of the kits fall into these categories, there are also a few (for example, Carnelian and Fufa) that are somewhat harder-edged and more challenging.

Those on a tight budget might be tempted elsewhere but Electro producers should certainly give Minimal Electro Vibes a spin. While there is nothing too ground‑breaking in terms of content, the sounds are spot-on and this title would complement Ueberschall's other Electro‑based titles very well. John Walden