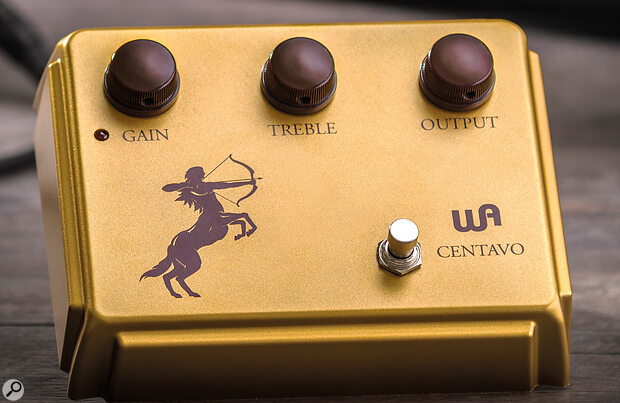 Launched in 1994, the original Klon Centaur Professional Overdrive pedal was surely the product that paved the way for today’s vibrant ‘boutique’ guitar‑pedal market. Created by guitar player Bill Finnegan in collaboration with some MIT electronics engineers (who apparently had no previous experience of guitar‑pedal design!) the Centaur would go on to become, for some, the most sought‑after pedal that the market would ever see. Warm Audio’s reproductions of classic mics and studio gear often give more than a nod to the aesthetics of the products that inspired them, and this one goes a little further in being an almost exact replica, with the Texas‑based manufacturer’s new Centavo pedal sporting precisely the same custom‑cast, oversized housing, correctly proportioned Oxblood knobs and similar ‘mythical creature’ graphic, as an original Klon Centaur.

Inside, the Centavo is stated to be a faithful recreation of the original circuit, too, employing the same TL072 op‑amps, the famed 1N34A Germanium diodes, carbon resistors and the essential charge pump voltage regulator in the power supply that makes an 18V supply available internally from a 9V PSU or battery source. The 1N34A diodes are a big part of the mythology of the Centaur, but that component designation itself covers rather a lot of diodes that are not necessarily exactly the same. The ones Bill Finnegan and his collaborators chose for the Centaur had a very particular forward‑voltage characteristic, without which you, allegedly, don’t quite have a Centaur. I can’t say exactly which 1N34A diodes are in the Centavo, but the Warm Audio production team are said to have “spent may hours meticulously comparing various versions of each component to land on the right recipe to get the true Klon Centaur sound”.

Although never explicitly marketed as such, the Centaur was designed primarily just to push the front‑end of Fender tube amps, to allow them to deliver a bit more of the sustain and feel that they offer when turned up to their optimum level: something that was becoming increasingly difficult to do in the ever more volume‑restricted clubs and bars of Bill’s local area. That was a job most often undertaken by various incarnations of the Maxon/Ibanez Tube Screamer circuit, but Bill wanted something that could retain more of the sound of the original amplifier. To assist with this, the Klon circuit ended up being designed with a clean path in parallel with its distortion process, with the clean signal getting progressively faded out as the distortion is increased. The concept of the ‘transparent overdrive’ originates here, even though the effect of the circuit is actually far from transparent.

The ‘classic’ setup for a Centaur is with the Gain at a very conservative nine o’clock, the Treble more or less neutral and the Output somewhere above unity to push the front‑end of the amp hard. Running the Centavo into a ’60s Deluxe Reverb, with the volume on four, so still mostly clean, I could immediately hear that this does what a Centaur is supposed to do in that mode. There’s no obvious distortion or limiting of the dynamics, but the sound just seems ‘curated’ and polished. Now, I have to admit that I last played a real Centaur in about 1996, but I have used a couple of the better ‘Klones’ since, and that has always been the common experience. What you get is still very much the sound of the amp, just nicer and more focused, as if trimmed a little at the top and bottom of the spectrum, to leave you with more of the bits you want and less of anything that might otherwise get in the way.

What you get is still very much the sound of the amp, just nicer and more focused.

One thing I remember very clearly about working with the Centaur circuit is that the more you turn up the Gain, getting into the zone where the pedal itself is generating distortion rather than the amp, the less special I think it becomes. And that is exactly the same for me with the Centavo, which perhaps attests to a level of authenticity in the circuit. It is still unusually ‘fast’ and articulate — that 18V internal supply adds headroom and increases the slew rate of the op‑amp, allowing it to preserve transients better — but it is mostly op‑amp distortion to begin with, at least until you start to work the ‘special’ diodes, which are deployed in a hard‑clipping configuration, like a RAT pedal or a Boss DS‑1, rather than the gentler, diodes‑in‑the‑feedback‑loop, soft‑clipping effect of a Tube Screamer and its many derivatives.

The Centavo incorporates a switchable popular mod for Centaurs that subtly extends the bass response, which I find makes for a more complete sound when using high‑gain settings, but there are plenty of players who reject the ‘low‑gain Klon’ orthodoxy altogether and love the standard Centaur circuit just as a full‑on distortion pedal, with or without mod.

Warm Audio’s Centavo has buffered bypass like the original Klon model, and joins a long list of historically faithful ‘Klones’ that all do ‘the Klon thing’ with only quite subtle differences. This one does it, too, ‘fabled diodes’ or not, and if you are keen to have the look as well as the sound, you might also want to bear in mind that you could buy about 20 of these for less than the price being asked for the occasional original that comes up for sale!