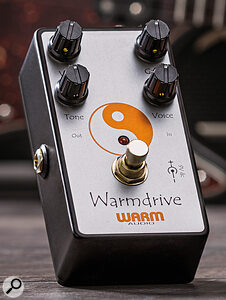 Reviewed alongside Warm Audio’s Centavo is their version of designer Alfonso Hermida’s famous Zendrive pedal. Unlike the original Centaur, Zendrives are still being made, albeit under licence by USA manufacturers Lovepedal. But circuits by themselves cannot be protected by patent, so there are numerous ‘unofficial’ versions available from other makers, too.

There is some symmetry to these two Warm Audio pedals being launched together, as one of the models that inspired them, the Klon Centaur, was conceived out of dissatisfaction with the ubiquitous Tube Screamer, whilst the other, the Zendrive, actually is an ‘improved’ Tube Screamer circuit. The latter contention might seem heretical to some, but any overdrive pedal that uses ‘soft‑clipping diodes in the feedback loop of an op‑amp’ is to some extent building on the heritage of the Tube Screamer. Where the Zendrive circuit differs most significantly, however, is in giving the user access to two of the really influential parameters that are fixed characteristics in the Tube Screamer, specifically the amount of bass cut prior to the distortion stage and the amount of high‑frequency roll‑off after distortion.

The Warmdrive mimics both the appearance and the control layout and nomenclature of the original Zendrive exactly, with Volume, Gain, Tone and Voice controls. This last control sets how much bass makes it through to the clipping stage, and simultaneously affects the amount of gain available, making the two controls interactive. Lower Voice settings that allow more bass through generally need lower gain to avoid sounding too congested, whilst you can get away with a lot more gain when trimming off more bass. The Tone control then lets you filter how much treble makes it through to the output, which works rather differently to the Tube Screamer’s active Tone control, offering both cut and boost of highs after a fixed high‑frequency roll‑off has already been applied.

In contrast to a standard Tube Screamer’s simple symmetrical pair of silicon clipping diodes, the Warmdrive, like any proper Zen circuit, uses a combination of 1N34A Germanium and Schottky BAT41 silicon diodes plus 2N7000 MOSFETs in an asymmetrical clipping arrangement. That slightly unusual configuration seems like it might have been something arrived at by ear, and adds complexity to the sound without creating the kind of harshness that a wide asymmetry can generate. The MOSFETs here are actually just being used as clipping diodes, as they are in an OCD or MOSFET Fulldrive, for example. You don’t need to know or understand any of that, of course, to appreciate the Warmdrive, but when so many pedals are essentially based on the same few original circuits, it may be useful to know which ones offer something a little different, and why.

The absolute best of the Zen design in my experience, equally true of the Warmdrive, is to be found running it into a slightly higher‑gain channel, with the pedal’s Gain kept lower.

A lot of users run a Zendrive (or clone) into the clean channel of a tube amp to create a ‘singing’ lead tone, with the pedal gain somewhere up around 12 o’clock. The Voice setting is then very much guitar‑dependent: lower for single coils, higher for humbuckers, in general. But it is also very much amp‑ and cab‑dependent, too. Used that way, the Zen design gained its reputation as the go‑to pedal for the Robben Ford/Larry Carlton ‘fusion lead’ sound, and the Warmdrive will certainly give you a nice version of that. This is not a high‑gain pedal design, being famed more for its touch sensitivity, fundamental tonality and the quality rather than the quantity of its distortion voicing. But, with the Gain up anywhere around halfway or more, I’ve always felt that the Zen circuit doesn’t clean up as much as I’d like with the guitar’s volume control backed off, and the Warmdrive is exactly the same. It seems also that the bridge and neck pickups would, often, ideally benefit from different Voice settings.

The absolute best of the Zen design in my experience, equally true of the Warmdrive, is to be found running it into a slightly higher‑gain channel, with the pedal’s Gain kept lower, around nine o’clock or just past the point where you hear the louder gain begin to kick in. With Volume around or just above unity, the combination of the pedal and the amp gives enough drive and sustain for the sought‑after ‘singing’ lead tone, while the pedal itself seems to regain the ability to clean up really well. There seems to be even more touch sensitivity, and whatever Voice setting you settle on for either pickup will work just fine with the other. That is where the real touch‑sensitive ‘note‑bloom magic’ in this design is to be found, for me.

Unlike the situation with the Centaur, which has been out of production in its original form for many years, some people may not be totally comfortable with so exact a physical replica of something that’s still very much a live product, but the market itself ultimately tends to be the judge of such things, and Warm Audio are far from alone in taking this approach. Their Warmdrive certainly goes a long way towards replicating the sound of the original, ‘classic’ version of the pedal design that helped create the whole ‘Dumble‑in‑a‑box’ concept. Of course, no overdrive pedal on its own can fully replicate any amp, still less a really special one, but in combination with the right rig, with the right settings, this one can certainly get you into that area, and I have to say I like how it does it!