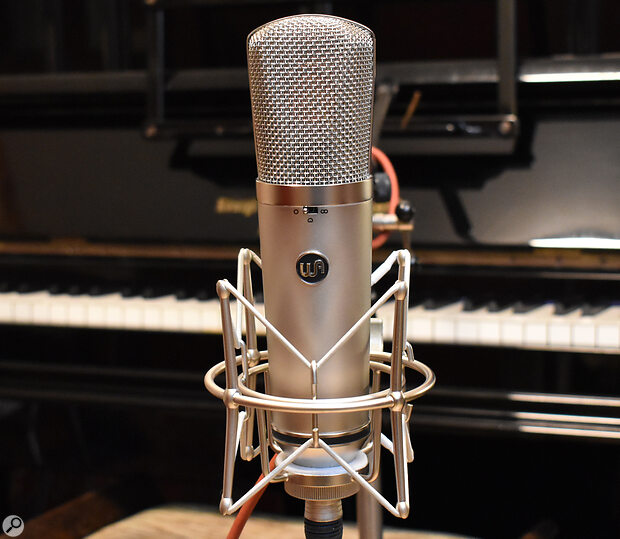 Warm Audio’s revised take on the Neumann U87 gets even closer to the real thing.

Since their launch in 2011, Warm Audio’s product output has been nothing short of prolific. It feels as though they release something new every month that promises to bring the sound of fantasy studio gear within reach of home recordists and project studio owners. I’ve reviewed a number of their products for SOS and, despite some superficial niggles in the looks department, I’ve always been impressed with the sound quality and price. In this case, we have a first for the company: a revision of an existing Warm Audio product, the WA‑87 capacitor microphone.

Released in 2016, the WA‑87 is intended to recreate the sound of the Neumann U87 at a more affordable price. The first version was reviewed by SOS Editor In Chief Sam Inglis (see http://sosm.ag/warm-wa87). That review included an in‑depth explanation of how the older Neumann mics differ from the newer versions; a brief summary is that the U87 was released in 1967 as a solid‑state successor to the U67, but that the U87Ai that is available new today is the result of a 1986 design revision which some think sounds different. This is an important point to make, because Warm Audio explicitly say that their inspiration for the WA‑87 is the original version of the U87, which is preferred by some engineers and certainly more sought‑after on the second‑hand market.

New or old, U87s have been a studio staple since their original release and are known for being a high‑quality all‑rounder with a midrange characteristic that works more often than not as a vocal mic. So, in case you’re getting confused: I’ll be reviewing a new version of a new microphone that is trying to emulate the sound of a vintage mic that has since been revised by the company that introduced the mic in the first place. Warm Audio explain that as the WA‑87 was their first ever microphone, they were keen to see if they could now improve it, having gained more experience developing their subsequent mics.

The WA‑87 R2 is a large‑diaphragm capacitor mic with switchable cardioid, omni and figure‑8 polar patterns, an onboard 80Hz high‑pass filter and a ‑10dB pad. The R2 uses the same capsule as the previous version, but features a newly designed Cinemag transformer and high‑quality electronic components throughout. Also new is a nickel‑plated brass enclosure, which is said to reduce handling noise, and a larger basket around the capsule. The result of this, visually, is that the WA‑87 R2 is a very substantial mic that dwarfs my vintage U87. As with other Warm Audio products I’ve reviewed, I’m not a fan of how this mic looks, but I don’t think that is a point worth labouring considering the price, and also that it is a matter of personal taste.

The mic ships with a sturdy cradle shockmount, a fixed mount and a wooden case, which all seem well put together. However, with my review model, I couldn’t get the mic thread to fully tighten in either mount. This didn’t stop me from using the WA‑U87 R2 for review purposes, but it would be enough for me to return it if I’d bought one. [Since this review was published, Warm Audio have told us that the mis-matched screw threads only affected a limited number of early production units, and that the manufacturing issue has now been resolved. — Ed.]

Warm Audio say that they took the opportunity with the new revision to increase the output level from the microphone. This seems odd to me, as I can clearly remember that the first version was significantly more sensitive than my vintage U87, whereas I found the R2 to be almost identical. From a review perspective, this actually made my job easier, as I could directly compare the R2 against my U87 without worrying about the influence of the preamp operating at a different level.

The review of the original WA‑87 took place in my studio, and I used it myself on a number of sessions. My opinion was that it was a very respectable‑sounding studio microphone that offered good value for money, but I found it a touch lacking when put up against my own 1971 Neumann U87. It sounded good on some sources but the midrange, in particular, sounded thinner on the WA‑87. It was a very usable mic, but didn’t sound the same as the vintage mic it was meant to mimic. Cutting to the chase, whatever Warm Audio have done with this revision sounds noticeably better. As the WA‑87 R2’s reason for being is to bring the sound of a vintage U87 into the hands of home and project studio owners, I was primarily interested to see how it compared against the real thing. With this in mind, I set up some recording scenarios in which I could directly compare the WA‑87 R2 against my old U87. 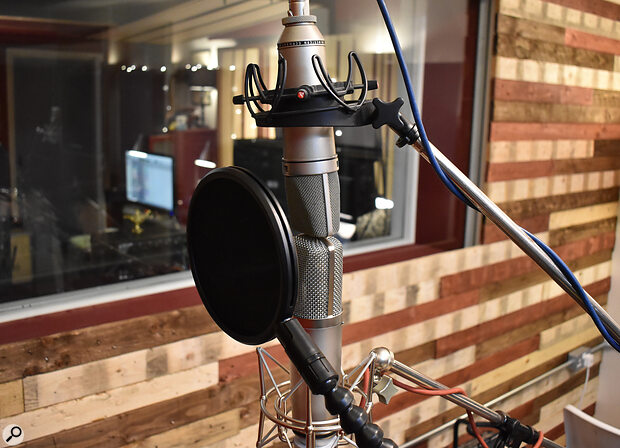 My first port of call was a female vocalist I’ve worked with a number of times and whose voice I know my U87 works well on. Singing over a pre‑recorded upright piano part I recorded — using my U87 and the WA‑87 R2 as a spaced pair — I carefully positioned the two mics so the capsules were as close as I could physically get them. After getting a few good takes in the bag we took a break to compare the two mics, and the results were very impressive indeed. Listening closely, the WA‑87 R2 sounded a little brighter and more modern‑sounding but the all‑important midrange was identical to my and my fellow engineers’ ears. On a male vocal, the results were the same and I remarked that if needed I could happily comp between the two mics without it being a problem. It was possible to hear a touch more lower mid on my U87 but the fundamental character of the mics was so close you would be more than happy to work with either.

In a change of scenery, I tested the two mics on drums, with both set about four feet back from the kit at a height of around three feet. On this occasion, I had the mics set to their omnidirectional polar pattern, and again the sound of the two mics was indistinguishable to the point of it being not remotely worth worrying about. As I final test, I grabbed a colleague at the studio and got him to do a mock voice‑over recording reading from the Warm Audio microphone’s manual. I like judging a mic with spoken word as it frees me from thinking about the performance, and it was highly impressive how similar the two microphones sounded side by side.

If you’re interested in judging for yourself, I’ve supplied the audio examples from my tests and they’re available at https://sosm.ag/WA-87-R2-media or download the hi-res WAV tracks in the ZIP file below:

After getting a few good takes in the bag we took a break to compare the two mics, and the results were very impressive indeed.

As the owner of an original 1971 U87, I was quite pleased when I heard the first version of the WA‑87 as I clearly preferred my mic on most sources. The WA‑87 R2, however, sounds spookily similar to its inspiration, and where it’s not identical, the very slight differences would give you a welcome choice depending on the source. I ended up using the Warm mic over my U87 for my female vocal recording, for example, as I liked the slightly brighter sound. I don’t know technically what effect age has on components and mic capsules, but the fact that Warm Audio have been able to dial in the sound of a brand new product to match that of a 50‑year‑old one almost identically is very impressive indeed.

The original U87 is a studio classic for a reason, in that it is an all‑round, reliable studio workhorse that can shine on most voices. Warm Audio’s WA‑87 R2 convincingly offers the sound of a vintage U87 at around a quarter of the price, and should make home recordists, and even professional studio engineers, very happy indeed.

The WA‑87 R2 sees Warm Audio revisit, and greatly improve, their version of a studio classic.