Find out just how well this vintage recreation compares with the original that inspired it.

While the mic preamps that are built into most modern audio interfaces work perfectly well most of the time, there are occasions when you might still want something a little more capable, or perhaps a little more colourful. Some, for example, don't have enough gain on hand to allow passive ribbon or dynamic mics to be used on anything other than drums and amps, or a good recording from a more distant condenser. Others don't respond too well when they're being overdriven — they sound clean all the way up to the point of clipping and then sound... well, awful!

If you find yourself in search of both colour and more gain, you could do worse than consider a preamp inspired by Rupert Neve's famous 1073. In 1970, Mr Neve developed a new module for the first 24-channel console to be installed in Britain — the Class-A 1073 preamp/EQ. This module helped to define the 'British sound', in part due to the sonic contribution of the Marinair Radar input and output transformers. The size, materials and windings of transformers all have an effect on the electrical signals passing through the metal, and therefore on the sound of an audio signal. As tastes changed, engineers who loved 1073s (and other Neve modules) began stripping them out of consoles and had them racked up with power supplies so they could take them anywhere, and this practice became even more popular as more audio engineers started doing serious work in home and project studios. The supply of sacrificial donor consoles available for mutilation and amputation naturally became increasingly limited, and various companies began issuing recreations of Mr Neve's design to meet the growing demand. But both the rackmounted originals and the boutique clones remained pricey. That's something that, thankfully, has changed in recent years, as a number of more wallet-friendly homages to the 1073 have come on to the market.

Warm Audio specialise in producing budget-friendly versions of iconic recording hardware, cutting as few corners as possible in the process, so perhaps it was inevitable that they'd release their own take on this particular classic. The result is the WA73-EQ, which, as the name suggests, is a recreation of the Neve 1073 mic, line and instrument preamp and features an EQ section too.

Not Just A Pretty Faceplate

Unpacking the review unit was more of a chore than I'd anticipated, largely because the WA73-EQ is so heavy! It comes in the form of a 1U 19-inch rackmount unit, and its reassuring weight is due to a combination of the thick-gauge casing, the large power supply, and the fact that the custom Carnhill transformers are not only fairly expensive models considering the overall asking price, but are hefty ones too. Why does the Carnhill name matter? Well, you'll most commonly read about Marinair-branded transformers being used in the 1073 (and other Neve units) but another company, St Ives Windings, was a supplemental supplier for the input transformers, and theirs had the same specs. Carnhill later bought St Ives.

The WA73‑EQ also has plenty of knobs and buttons, which may not add much by way of mass, but certainly contribute to the classy overall feel. Dual-concentric potentiometers are used for the EQ knobs, for example, and frequency knobs are firmly stepped, with the cut/boost knobs offering the ability to fine-tune the level at the selected frequency. The filter knob and input gain also snap as solidly into position as they should. The small output knob on the far right of front panel means you opt either for a cleaner sound, or to drive the unit quite assertively and still pass on a signal at a sensible level for the next unit in the signal chain. And with a total of 80dB of gain on hand, it's possible to capture soft voices or more distant subjects cleanly. The EQ is inductor-based, again adding to the weight, and inductors can attractively colour the sound too. And Warm Audio have provided some thoughtful features — for example, instead of the fixed 12kHz HF shelf of the Neve 1073 and many clones, we're treated to the greater range of options of the Neve 1084.

Like the potentiometers, the buttons all feel great and engage firmly and securely. In addition to the expected phantom-power and polarity switches, there's a button for Tone, which changes the impedance of the input transformer — and therefore the tonality of passive ribbons and dynamic mics. Another row of three buttons is used to engage the line and instrument inputs, and switch the insert send/return jacks in/out of the signal path.

My first impressions, then, were very positive — in fact, the only problem was that cramming this number of generously sized controls in a 1U rackmount unit is that it might be considered a little crowded.

On the front panel, you'll find an XLR mic input, a TS instrument jack for DI recording, and around the back the professional amenities continue.

The rear panel includes an insert point, with separate send and return jacks.

There's a balanced TRS line input, which passes the signal through both transformers — potentially useful for 'warming up' a live synth or an already recorded track, even when not using the EQ — as well as a duplicate of the XLR mic input. The balanced line out is available both via XLR and quarter-inch jack. Finally, the insert has separate quarter-inch TS jacks for the send and return. So the WA73-EQ caters for any physical connection commonly found in a modern studio — you shouldn't need to order special cables to integrate it into your setup. The internal power supply uses a standard IEC connection, and on the inside this is well separated and shielded from other internal components. A convenient external switch chooses between 115/230 Volt mains power, and there's a ground-lift slide switch.

Finally, removing the top panel reveals a panoply of discrete components inside. The WA73-EQ is obviously hand‑assembled and partly hand-wired, with a number of through-hole components populating a number of PCBs. It all seems to be clean, nicely spaced and well-dressed. 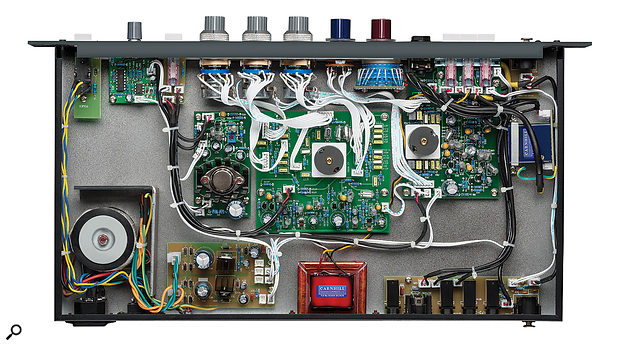 A peep inside the unit reveals high-quality components, including switched controls, two inductors and a pair of Carnhill transformers.

After wrestling the WA73-EQ out of its box, I first tried plugging in an electric guitar, and once I'd set up the gains to my satisfaction there was that low-mid fullness that I associate with Neve preamps — it sounded pleasingly big and thick. One of the things a good transformer does is smooth out transients, which has the effect of 'rounding off' the sound. It can impart a bit of slow majesty to the signal, rather like the French horn in an otherwise brassy ensemble! So, from the get-go, there was that obvious family resemblance between Warm Audio and Neve.

When used on a female vocal, I was able to find an input/output level ratio that put a Goldilocks' dollop of saturation on her voice, adding a touch of excitement to a solid performance. Later, at the Kitchen Studios in Dallas, we recorded typical rock setups through the WA73-EQ — for example, a Fender Twin miked off-centre with an SM57 — and was very happy with the results. However, you don't have to take my taste and opinion as gospel, as we captured some audio examples for you (see 'Hear For Yourself' box).

This clone definitely sounds good, then, but some will want to know just how well it emulates the original. Kitchen kindly allowed me to make some recordings through their original Neve 1073. Now, I should be clear that this was not a hugely scientific test, but rather a more practical real-world comparison, recording separate performances while changing the preamp — and we should probably also consider that any 1073 that has been in use for four decades may have had some work done over the years. Though the two devices they were certainly well within the same tonal ballpark, I could hear some small difference in the saturation effect, with slightly different intensities at some frequencies. The biggest difference I could discern between the two, though, was the way the low‑frequency control (35Hz) rolled off the lows on bass guitar; the Warm unit seemed a bit punchier when it was cleaned up. So they do sound different from one another under the microscope (again, you can decide for yourself how similar or different they are by listening to the examples) but in my view it's much more important to step back from all the pointillism and appreciate the whole canvas.

As good as some software emulations are these days, there's still something very special to me about tracking with great hardware and getting the sound right at source; it makes mixing quicker and easier — and thus much more fun! The WA73-EQ is a very capable mic preamp and EQ, which should serve as a great recording front‑end, with its transformers and classic inductor EQ being great for gentle sound‑shaping on the way in. It can provide a classic, beautiful tone that's a really useful contrast to the modern, more clinical sound of typical audio interface preamps. But don't discount it as a great-sounding line amp/saturator and EQ for adding character when mixing either, because it can be really useful in that role too. All in all then, I think the WA73-EQ is great value for money and should hold plenty of appeal for serious home studio owners.

There are plenty of Neve-style pre/EQs available at all kinds of price ranges. Golden Age make 1073-derived devices in both their Project and Premium ranges, while Heritage Audio's 500-series version costs a little more and will require a 500-series chassis and PSU. Stepping further up the price ladder, check out the offerings from BAE, Neve and Rupert Neve Designs.

You can download a ZIP file of hi‑res WAV audio examples in the righthand Media sidebar or use the link below.

With its keen price, high-quality components, hardware, and thoughtful design, the WA73‑EQ is an excellent mic/line/instrument preamp that will be attractive for use in both home and commercial recording facilities.