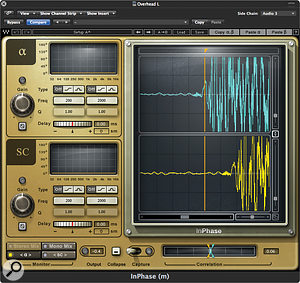 In this screenshot, InPhase's graphical display reveals the slight delay between two overhead mics at different distances from the kit.

I admit to having something of an obsession with phase. As an engineer who works live as well as in the studio, I find the phase relationships between different signals affect what I do in ways that range from pleasing to almost catastrophic. This may seem like an exaggeration but, in my view, out-of-phase signals can destroy a mix faster than anything else.

When we combine signals to provide mixes for recordings and concerts, the time differences and phase relationships between these signals are crucial for presenting a clear and coherent sound. Yet this is an area that is often overlooked and poorly understood. Every time two similar signals, such as a bass microphone and a DI, or two mics on the same drum, are combined, they will interact, and their phase relationship can cause comb filtering, where different frequencies are emphasised or cancelled. This is most easily demonstrated by taking a stereo track and inverting or flipping the polarity of one side by 180 degrees. This will cause much of the signal to disappear, as the common elements in the left and right signals effectively cancel each other out. This is an extreme example, but it helps to demonstrate how damaging an inappropriate phase relationship can be to a track. 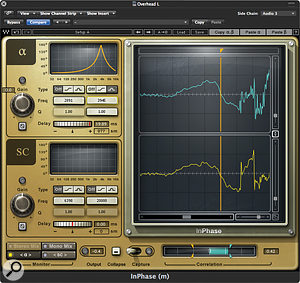 The same overhead mics: this time, the first channel has been delayed and a filter added, so that the phase coherence is greater, resulting in a fuller sound.

When I mix, I will usually reach for the polarity switch before the EQ, and sometimes this can produce the result I want. So, too, can very short delays, but in most cases these offer only a partial improvement, and that is when being able to adjust the phase of a signal by degrees is useful. I have a hardware box, the Radial Phazer, that I have been using for several years, and which gives me the ability to rotate the phase of a signal by anywhere between 0 and 360 degrees. As you rotate the phase, any comb-filtering between the source signal and other signals will change in character. It's a little like a guitar phaser pedal, except that you can leave it fixed at the position where the result sounds best.

In software, I have been using Voxengo's handy PHA979, or Little Labs IBP from UA, to help shift phase and achieve better time alignment. Up until now, I haven't found many better alternatives so I was happy when Waves announced InPhase, a multi-platform plug-in offering phase and time alignment. I downloaded two versions, the first for my Mac, to try in Apple's Logic Pro, and the version intended for live use, which I installed on an Avid Profile Live console.

Waves have taken a more comprehensive route than many of their competitors, and provided sophisticated visual waveform monitoring to help you with the alignment, in a way which will be familiar to anyone who uses Spectrafoo or Smaart. The plug-in has two channels; these default to left and right sides of a stereo input, but either can be assigned to a separate side-chain input. You play the audio you want to adjust and then record a section into InPhase, using the Capture switch for analysis. Both channels have adjustment tools, so you can alter the time alignment and phase of either channel. The dual screens show the waveforms captured.

When zooming in to the waveform, it is best to locate a good clear peak, such as a first note of a bar or clear beat. The meter at the bottom will either show blue (in) or orange (out), depending on how good the phase correlation is between the two channels. It is then easy to start making adjustments. Firstly, you can adjust the time-alignment of either channel, moving its audio either earlier or later in time (obviously, the live version only lets you move audio later!). Aligning the time of the channels will often make a big difference, but the signals may still be out of phase, which is where the two phase filters on each channel come into play. These can be set to slope or bell shapes, with adjustable frequency and bandwidth in bell mode. Adjusting the phase of one channel against the other will produce very obvious results. You can also switch the 'phase centre' point (the frequency at which the first-order phase filter produces a 90-degree shift) between 200Hz and 2kHz.

It's Just A Phase 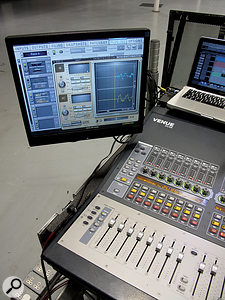 I found the best way to get to grips with InPhase was to load up a stereo track and experiment, getting used to what the filters do on a track that doesn't suffer from phase problems. Once I'd got used to this, I tried it on problem signals, such as a bass guitar recorded with two mics or a mic and a DI signal. This is where the plug-in comes into its own. Aligning the timing of the almost instantaneous direct signal and the slightly delayed mic signal helps, but adjusting the filters to add weight and punch can go even further towards making the two signals gel. The same applies to snare top and bottom mics, or kick-drum and snare channels. It also works really well in dance music where multiple keyboards are layered to make fat bass lines; in fact, any layered instruments can benefit.

Obviously, the live version of InPhase cannot shift time forwards, but it can really help tighten multi-miked sounds. It can also be used to help with room nodes, shifting the phase point away from a problem area. I tried it on several instruments with good results. It is best, though, not to be too obsessed with what you see on the screen, but rather listen to the results. The screen should only be a guide.

When using it on a recent tour, I lent my iLok to the support act's engineer for use on the snare channels. After a few minutes capturing the sound and setting it up, he summed up his feelings thus: "It solved a problem I knew I had in a way I hadn't considered, and did so extremely satisfactorily.” Overall, I found InPhase to be a thoroughly useful tool, and one that I will probably end up buying. Its combination of time- and phase-alignment tools alongside the analysis screens make it a very well-constructed plug-in that gets my thumbs up! There is also a cut-down 'LT' version, which has fewer features but is easy to use and very handy. Waves provide videos on their web site which demonstrate the different ways the plug-in can be used, and anyone interested would do well to check them out: www.waves.com/content.aspx?id=11948#video.

Hardware phase-manipulation tools include the Little Labs IBP and Radial's Phazer, while there are various software tools available from the likes of Voxengo and Universal Audio.

Waves' InPhase is a handy package of time-alignment and phase-rotation tools with easy-to-use features and an effective visual display.