The Nx Virtual Mix Room plug-in (left) is paired with a stand-alone program that sets up the head-tracking aspect of the product (right).

Room simulation on headphones usually stops being convincing as soon as you move your head. Not so with Waves’ new Nx...

We all know that listening on headphones provides a very different experience from listening on loudspeakers. In an effort to narrow that gap, Waves have developed Nx: a monitoring plug-in that slots into a DAW’s master stereo out insert point with the aim of emulating a control room/loudspeaker environment when listening on conventional headphones. This includes simulating the reflective qualities of a well-designed control room and applying binaural processing to create a convincingly real listening experience, to the extent that Nx can present surround mixes in 7.1, 5.1 or 5.0 formats as well as mono and stereo, all using conventional stereo headphones.

There have been other attempts to reproduce the loudspeaker listening experience on headphones, but many have failed to compensate for head position and movement. On headphones, the soundstage follows every movement of our heads; not so with speakers, where the change in what we hear as our heads move is key to locating the direction from which the sound is coming. That’s where Waves’ Nx head-tracking technology comes in. This can follow the movement of the user’s head, either using the computer’s built-in camera or, better still, the dedicated Waves Nx Head Tracker unit, which clips on top of your headphones using a thick rubber band and communicates with the computer using Bluetooth. The Nx Head Tracker works in low light conditions and when you’re not directly in front of the computer; it also responds rather more quickly to head movements than the camera. For the greatest precision and speed, it is possible to combine input from both the Head Tracker and camera. The Nx Head Tracker only works with the newer Bluetooth low-power systems (Bluetooth 4.0 BLE), so some older computers may not support it directly, though adding an inexpensive USB-BT4.0 BLE dongle should get you working.

Powered by a single AAA battery and activated by a rubbery button, the tiny Head Tracker can follow head movement in all three dimensions, and there’s a Sweet Spot button in the plug-in window so that you can optimise listening for your preferred position. Pairing the tracker with the software is straightforward, and a blue status LED on the unit lets you know when it’s successfully connected. If you leave the headphones on the desk for a while the tracker will go to sleep to save battery power, necessitating a push of its button to bring it back to life. 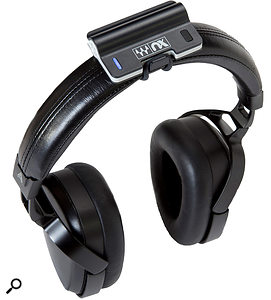 The Nx Head Tracker is an inexpensive device that attaches to your headphones and communicates with the computer using Bluetooth.When working with a DAW — I tested it with Logic Pro — launching the Nx Virtual Mix Room plug-in automatically launches the separate Nx Head Tracker software and causes the plug-in to open in a format corresponding to the output channel format of the project. For example, if your mix is set up for stereo, you’ll see two speakers, whereas if you have a 5.1 mix set up, you’ll see five speakers positioned around the head as well as a subwoofer.

With the tracker active, a virtual on-screen head moves to follow your own head position. The angles of these virtual speakers can be changed, as can the level of room reflections, with a Centre Trim control to reduce the level of ambience in the mid channel. An XYZ lock switch disables all but the rotational elements of the processing, to allow movement away from the mixing position. Importantly, the head-modelling section at the lower left makes some assumptions by using average head measurements. If you adjust these to correspond to your own actual measurements the positional effect will be more convincing. Your own settings can be saved as user presets.

The effectiveness of speaker simulation over headphones depends to some extent on the individual. Whenever I listen on headphones I have difficult placing the sound source anywhere other than inside my head, and I know there are others who experience headphone listening in a similar way. Nx certainly helps with this problem, though for me, the sense of front-to-back perspective is still not as deep as when using real speakers. When listening to stereo material, the sound appears to come from a pair of virtual speakers that retain their placement relative to the originally set sweet spot regardless of how far you turn your head, so if you turn your head 90 degrees to the right, for example, you’ll hear the mix more in the left ear than in the right, just as you would when working with speakers. Adding a little room ambience helps reinforce the ‘working in a control room’ sensation, though I preferred to keep this setting fairly low.

Switching to a surround mix works in a similar way: sounds that are panned to the rear take on a slightly more distant character, and come more clearly into focus when you physically turn around to face them. That’s because the binaural processing tries to emulate the timbral changes that occur naturally when we listen to sounds emanating from different directions, and the added room ambience emphasises the sense of distance, but as no two sets of pinnae are exactly the same, the precise effect will differ slightly from listener to listener. I don’t hear the same degree of front-to-back separation as from a surround speaker system, but in conjunction with using head movements to confirm localisation, there is a definite sense of left/right, front/rear position that adds a useful impression of depth. In practical terms, this means you can evaluate a surround mix quite effectively, but you may have to move your head further to confirm the source directions than you might when using real speakers. Bypassing the plug-in leaves the mix sounding very flat by comparison.

I did a few comparisons between listening on my speakers and on headphones and found that with the Nx plug-in engaged, the perceived sound was much closer to that of the speakers than without it, especially at the high-frequency end, where unprocessed headphones always seem to be thrusting detail right in your face. With Nx active, the high end felt much closer to what I heard from my speakers, and that artificial sense of over-emphasised stereo width was put back into proper perspective. With straightforward headphone listening, I tend to hear stereo placement along a straight line drawn through my head, but Nx presents a much more three-dimensional experience that is comfortable to work with for long periods without sounding fatiguing.

Do We Need Nx?

Ultimately, I wouldn’t want to trade in a good surround speaker system for Nx, or even a good pair of stereo speakers come to that, but that’s not really the point. For working on a stereo mix on the move, or for mixing in surround where you only have stereo monitoring, Nx has a great deal to offer. It is also true to say that the more you use it, the more your brain learns to interpret the result — it’s rather like getting used to a new pair of spectacles.

Given that many people now ‘consume’ their music via headphones or earbuds, it is important that your mixes sound OK on headphones without Nx engaged, but having the option of listening via Nx is like being able to ask for a second opinion. Even if you don’t find it absolutely lifelike, it is certainly more like listening on speakers in a real control room than headphones alone. It may even give you a better idea of how your mix really sounds than budget speakers in a badly treated room. For surround mixing Nx is even more appealing, as few of us have surround speaker setups in our studios. While the experience still isn’t exactly like monitoring on speakers, the ability to check the localisation of sound by moving your head makes it a practical alternative when dipping a toe in the murky waters of multi-channel mixing. Indeed, if only all consumer playback systems had something like Nx built in, we might feel more inclined to move up to surround mixing rather than it remaining largely the domain of film and TV.

Waves say they are planning to release a more consumer-oriented Nx application in the near future, to enhance general music listening or gaming when using headphones. I checked out a beta version to listen to a commercial quad recording played back via Nx using the free VLC Player software, and it was surprisingly impressive. Could this be the Nx big thing?

The ne plus ultra of headphone speaker simulation systems is the Smyth Research Realiser, but this is vastly more expensive than Nx, as is Beyerdynamic’s Headzone Pro. Focusrite’s VRM products offer speaker and room simulation, but don’t support head-tracking.

Waves have managed to produce a very cost-effective means of emulating loudspeaker listening on headphones, and the resulting soundstage is surprisingly three-dimensional.