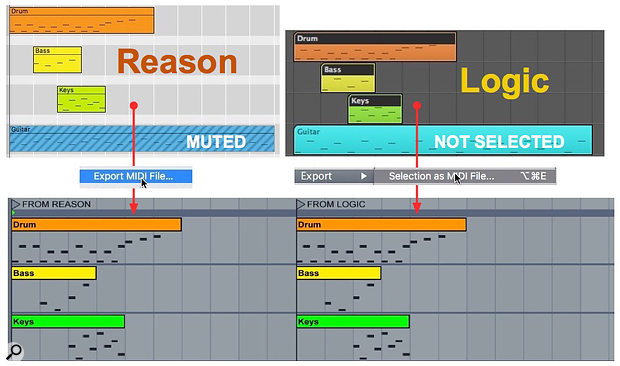 1: Three parts from same four-part MIDI song are exported from Reason (left) and Logic (right) to Live (bottom). Although the Live clips all begin at the same position, their data remains properly aligned with the original.

We show you how to share MIDI files with Live.

In this month’s column we’re going to look at how Live MIDI manages MIDI files.

Let’s start with some basics. Computer files with the extension ‘.mid’ or ‘.smf’ let you share MIDI data among your music software programs. Although the MIDI file format goes back several decades and has been revised over the years, the only important distinction for the MIDI files you’ll encounter for sharing MIDI note and controller data is whether the file comprises one or several tracks. Single-track MIDI files are officially called Type 0 files and multitrack files are called Type 1, but I’ll simply refer to them as single and multitrack MIDI files. Because they look the same on your hard drive, you can’t tell the difference until you drag one into Live to see whether you have a single MIDI clip or a handful of them.

Most DAWs can export and import MIDI files. Live’s approach is the simplest: select any MIDI clip from either Arrangement or Session view in a Live Set and choose ‘Export MIDI Clip’ from Live’s File menu (Command-Shift-E /Control-Shift-E). This produces a single-track MIDI file holding the clip’s contents with all events assigned to channel 1. When you have a Live arrangement with multiple MIDI tracks and you want to preserve the relative timing of the clips exported from those tracks, your only choice is to Consolidate the clips on each MIDI track using the same start position and then export them one at a time. If you then import those clips into another Live Set or into any other DAW and align their start positions, they will be in sync. (For sharing with other Live users, it’s much easier to create and save a Live track or a Group holding several tracks.)

Both Logic and Reason export multitrack MIDI files, but they do so in slightly different ways. Like Live, Reason does not use MIDI channels internally, and all exported MIDI data is assigned to channel 1. To export MIDI clips from a Reason Song, first mute all clips that you do not want to export and then choose ‘Export MIDI File’ from Reason’s File menu. Logic does use MIDI channels internally, and all events in exported MIDI files retain their channel assignment. That leaves the possibility, mentioned above, that exporting MIDI files from Logic and importing them into Live will combine events from different channels. To prevent that, use Logic’s ‘Separate By MIDI Channel’ option to split each Region containing multi-channel data into multiple single-channel Regions on separate tracks. To export MIDI data from Logic, select all the MIDI Regions you want to include and then choose ‘Export Selection as MIDI File’ from Logic’s File menu (Command-Option-E).

To import a MIDI file into a Live Set, drag it to Live’s Arrangement or Session view from either Live’s Browser or your computer’s file system. Individual tracks from multitrack MIDI files will appear as individual clips distributed across consecutive Live MIDI tracks as shown in Screen 1 (above). New Live MIDI tracks will be created as needed and empty audio tracks in the import range will be converted to MIDI tracks. Make sure there are no audio tracks holding audio clips within the import range because they will block the MIDI clip that would otherwise be placed there and, in Arrangement view, will also stop the import at that point. You can avoid such conflicts by dropping the imported clips after the last Live track in your Set, thereby creating a new MIDI track for each clip.

One thing to keep in mind when importing multitrack MIDI files into Live’s Arrangement view is that all the clips will start at the same timeline position, even if the original tracks did not. Live adds empty space at the beginning of each imported clip to make that happen, thereby ensuring that all MIDI events retain their relative position. That may seem a little awkward when working in Arrangement view, but it pays off when importing MIDI files in Session view because Scenes holding the imported tracks will preserve the clips’ relative timing. However, the imported clips will have looping enabled and will not necessarily be the same length, so you’ll need to adjust their lengths if you want the clips to loop properly. 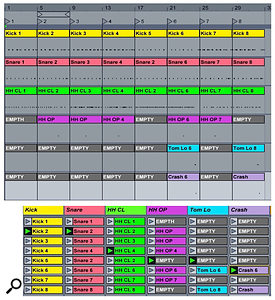 2: A multitrack MIDI drum file is sliced into four-bar segments (top). The clips were then copied to Session View to create new drum Scenes (bottom).MIDI drum libraries (as well as MIDI files exported from drum sequencers) often devote a separate track to each kit piece. This is very useful when you want to mix and match kit-piece patterns from several drum tracks or from shorter segments of a long drum track. When you have a single-track MIDI drum file that combines all kit pieces, you can easily split it into individual kit-piece tracks by importing it to a Live track holding a Drum Rack and then right-clicking on each used kit-piece Chain in the Drum Rack’s Chain List (not on the Drum Rack pads) and selecting ‘Extract Chains’ from the drop-down menu that appears. Realistic drum patterns use only a few kit pieces, so extracting their Chains is not as tedious as it might sound.

Session view works well for importing short drum tracks, but with longer tracks it’s easier to first import them into Arrangement view and then use Live’s Loop Brace to select shorter sections and Consolidate (Command-J /Control-J) those sections across all tracks. You can then select the Consolidated clips and drag them to Session view clip slots as shown in Screen 2 (above). From there, either mix and match kit-piece clips manually or use Follow Actions to mix things up at random. In either case, when you hear something you like, use Live’s Capture and Insert Scene feature (Command-Shift-I /Control-Shift-I) to create a new Scene holding the selected clips. 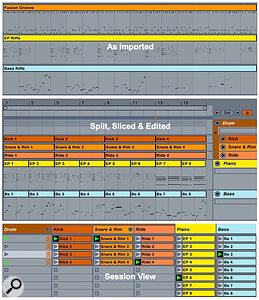 3: Three imported single-track MIDI files (top) are sliced and edited to capture four-bar drum clips along with two-bar electric piano and bass clips (centre). These clips are then used to create new Scenes in Session view (bottom).Capturing alternative takes — different chord voicings or melodic fragments, for example — is another use for multitrack MIDI files. Commercial libraries often provide them as multitrack MIDI files, and it’s easy to generate them from DAWs that export multitrack MIDI files by moving each take to a different DAW track. When you import a MIDI file containing multiple takes in Live, you’ll want all the takes (all the imported tracks) to wind up on the same Live track. Pressing the computer’s Command/Control key while dragging a multitrack MIDI file into Live accomplishes this; in Arrangement view all the clips will be lined up on the same track, whereas in Session view they will occupy consecutive clip slots on the same track.

Although multitrack MIDI files take some of the work out of capturing individual tracks, takes and kit-pieces, you can do all the same things with single-track files, and it’s often easier. Screen 3 starts with three imported single-track files: a four-kit-piece drum pattern and multiple takes for piano and bass. With a little slicing, consolidating and editing, they are easily converted to a flexible Session view setup for generating Scenes by mixing parts.