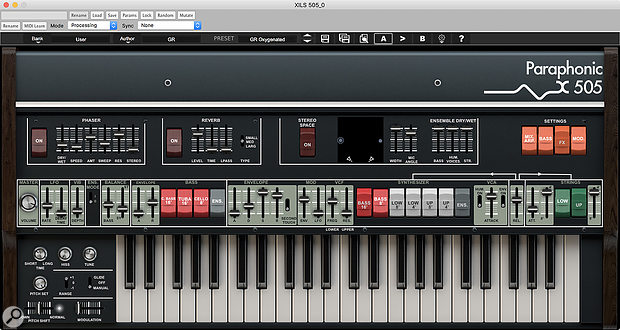 XILS Lab have recreated a classic Roland string synth, and made a few improvements to boot.

The Roland RS505 is not particularly well known, but it's nonetheless important because it's the keyboard that coined the term 'Paraphonic' for instruments that could play multiple notes simultaneously but had only one VCF and VCA to shape all of them. It offered bass, synth and strings sections, but it was contemporaneous with the Prophet 5 and Oberheim OBX so, while it was cheaper, players' expectations had moved on and it sank almost without trace. Today, its rarity makes it interesting so it's perhaps not surprising that it has now been recreated as a soft synth.

Far from being a slavish recreation, X505 considerably extends the RS505's capabilities, starting with the top-octave signal generator itself, which now features a Waveform control that morphs the basic wave from an approximation of a sawtooth to something with suppressed even harmonics and more of a 'square' tone. This was part of the attraction of the earlier and more successful ARP Omni and, although the effect is subtle, it extends the range of timbres that you can obtain.

In the Strings section, you can now select polyphonic Attack (which is a huge improvement), adjust the ensemble wet/dry mix, and determine whether playing new notes during a Release reinitialises the contour from zero or allows it to climb more musically from the current value. Next, the Synth section adds the ability to apply the ADSR to the amplitude as well as the filter, and a diminutive button named Hum On converts the Synth into the Human Voice section of the VP330. It does this very well but also allows you to mix the relative levels of the vocal pitches and to adjust the formant frequencies and resonance, making it possible to imitate many other 'vocal' synths of the era. The Bass section is also enhanced but, on the first version that I tried, it spanned the whole keyboard, making it impossible to play the X505 as a 'bass at the bottom, chords and melodies at the top' instrument. I pointed this out to Xavier at XILS Lab and, within days, a new version appeared that has a switch to enable the original behaviour as well as the new. The 16' Contrabass tab was also very loud when compared with the other bass sounds so I mentioned this too, and each bass instrument now has a level control so that you can balance them as you choose.

The mixed signal now passes to an effects section comprising a stereo phaser that meshes nicely with the ensemble, a simple reverb, and a stereo space effect. Placing (for example) a Synth brass sound to the right, ensemble Strings to the left, and Bass in the centre goes a small way toward substituting for the lack of the RS505's separate outputs. There's also an arpeggiator that offers various modes and octaves but, unfortunately, no latch. Other notable upgrades include an additional LFO, an HADSR modulation envelope, and a six-slot modulation matrix offering 11 sources and 23 destinations. The ability to direct velocity and aftertouch to the destinations of your choice takes the X505 far beyond what was possible in 1978.

Comparing the X505 with my RS505, I discovered that its sound isn't quite the same, although I doubt that the difference matters in any musical reality. Similarly, the recreation of the four-part chorus/ensemble is close but not identical. Furthermore, the RS505 offers three ensemble settings whereas the soft synth offers only two. I asked Xavier about this and he explained that, on the RS505, setting III is a mix of setting II plus the dry signal, so it can be recreated on the X505 using setting II and the dry/wet control in the Mix panel. I tried this and it did a very good job. Strangely, the pitch of the X505 is an octave low. This was a conscious decision by XILS Lab to keep it at the same octave as the V+ but, in my view, this was a mistake. Happily, if you want the X505 to play at the same pitch as the RS505, you can overcome this by setting its Range switch to +1.

If you're after the classic late-'70s Roland string and vocal sounds and you don't need a vocoder, X505 comes very close and then adds considerably more.

Even though the original manual suggested that it should be possible to make X505 work as an audio processor, I wasn't able to make it do so. This turned out to be an error in the manual rather than the software, which is a shame because passing audio though the RS505's chorus was one of its most endearing features. The manual described some other facilities incorrectly too and, once I had pointed these out, XILS Lab again responded with a revised version.

I could now write about the X505's housekeeping, patch management, MIDI automation, display options and so on, but I've discussed these in previous XILS Lab reviews and they're much the same here. Sure, I discovered a couple of minor bugs, but I've reported them and they're too small to bother mentioning. Ultimately, the X505 has evolved during the past few days into an excellent soft synth and, if you already have an earlier version of the software and manual, I recommend that you upgrade immediately. At €149, it's not cheap but, if you're after the classic late-'70s Roland string and vocal sounds and you don't need a vocoder, X505 comes very close and then adds considerably more.

Marry the Roland RS505 and VP330, throw away the vocoder, add additional modulation, filtering, contouring and effects, then attach modern performance features, and turn the result into a soft synth. Voilà... the X505.