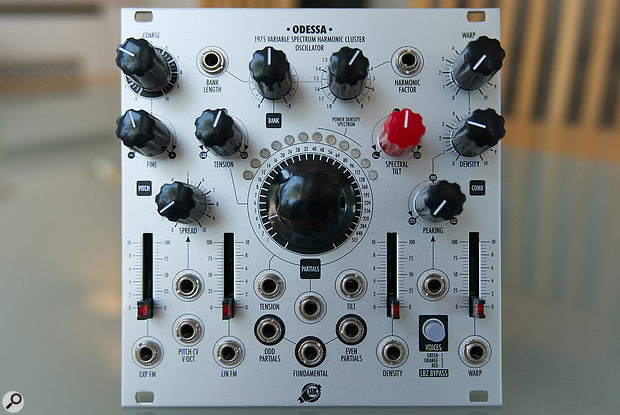 Perhaps because of its complexity, additive synthesis remains rare not just in the modular world but across the synth world in general. Additive synthesis is, as its name implies, the opposite of subtractive synthesis. Instead of starting with harmonically rich waveforms and removing frequencies with a filter, additive synthesis works with the purest waveform, the sine wave, and creates harmonics by adding more sine waves at frequency intervals above the fundamental.

Xaoc's Odessa aims to bring additive synthesis to the Eurorack world. It is, ostensibly, a single oscillator although it does, in fact, produce up to 512 sine waves. If that number sounds large, let me blow your mind — the Odessa is capable of five-voice unison, bringing the total number of sine waves generated to a potential 2560... surely some sort of record?

The various controls housed within the 24HP module are carefully chosen to let you manipulate that vast number of sine waves without the whole thing becoming unmanageable. A fundamental frequency, controlled by a 1V/oct input, is established much like any oscillator. It is then possible to add partials (more sine waves) and spread them away from the fundamental. There are nine controls with which to manipulate the number, distancing, amplitude and other spectral properties of the partials. The end result is a vast range of timbres: the Odessa can reproduce more traditional sawtooth and square waves, but is best when doing vast harmonic and inharmonic clusters.

Odessa is capable of five-voice unison, bringing the total number of sine waves generated to a potential 2560...

Let's look at the individual controls in a little more detail. Skipping past the usual coarse and fine tuning controls, the largest and most important control sits in the centre and sets the number of partials from 1 to 512. A ring of LEDs helps to visualise not just the number of partials but also their relative amplitude, indicated by colour. Tension changes the spread of the partials over the frequency spectrum. At its central position, the frequencies of all partials are multiples of the fundamental, which keeps them all harmonically related and relatively consonant. If you increase the amount, the partials spread further apart, creating metallic textures. Decrease and they move closer together, for something akin to detuned unison. The Tilt parameter adjusts how quickly the partials decay in amplitude as they get further from the fundamental. This has a similar effect to that of a low-pass filter, but can also be pushed in the other direction, so that partials become louder than the fundamental, increasing the brightness. A further trio of parameters called Density, Warp and Peaking are used together to create amplitude peaks and troughs across the partials, which create phasing and comb-filter-like sonic effects.

Every control has a corresponding CV input. Four of them come with neat attenuation sliders, complete with inbuilt LEDs to show the incoming CV level. There's both exponential and linear FM too, as well as a button to cycle round the unison options of one, three or five voices. These voices can be detuned using the Spread control and, if playing them polyphonically appeals, the optional Hel expander module adds five 1V/oct inputs in a neat 4HP module. This wasn't included in the review package, though, so I couldn't test it out.

One final note, which I found slightly odd, is that the fundamental waveform output can be switched from a sine wave to a square wave in order, the manual says, to sync other oscillators to the Odessa. Whilst this might sound useful, it can only be done by switching a jumper on the back of the unit. It's a shame there isn't a switch on the front, or even on the Hel expander.

In use, the Odessa delivers everything it promises. Additive timbres can be cold, metallic, precise and often otherworldly — all in a good way. I found it well suited to evolving drones and twisting techno lead lines that wind in and out of harmonic series. Additive synthesis offers a definable character which isn't achievable any other way and Xaoc have done an excellent job of taking something complex and distilling it down to a manageable feature set. If you're looking for something a little different to the usual subtractive analogue oscillators, the Xaoc Odessa will undoubtedly fit the bill.