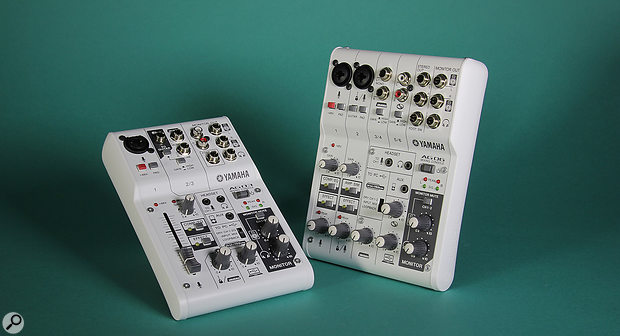 The AG06 might at first glance appear to be a compact analogue mixer — it sports a couple of XLR/combi mic inputs on the top, plus two other stereo inputs. However, it doesn’t have typical mixer features such as EQ controls and pan pots, or an included power supply.That’s because the AG06 isn’t primarily a mixer at all — rather, it might best be thought of as a bus-powered audio interface with some additional mixing and monitoring capabilities. The audio spec encompasses 24-bit, 192kHz recording and playback and includes a useful loopback facility. So you have to keep your wits about you to avoid setting up a feedback loop — but the user guide shows the correct settings for various typical applications.

It also incorporates some basic DSP effects. Channel one has a switchable Comp/EQ facility, which adds both EQ and compression with the aim of producing a polished vocal sound, and an Effect, in this case reverb. Channel two has a switchable Amp Sim, which promises a warm tube amp sound, and an Effect — again, a reverb, which is based on Yamaha’s established SPX algorithms. These effects are preset unless you download the free AG DSP Controller software, which gives you rather deeper control. At the time of review this was only available for Windows, though a Mac version is in development. The software offers an easy mode, which provides the user with stomp-box level tweaks to things like vocal tonality or amp gain, but also an expert mode, which provides a depth of control comparable with what you might expect from software plug-ins. For example, you can access the compressor’s gain, ratio, threshold, attack and release times, and there’s a fully parametric EQ. The amp sim has variable drive and a three-band EQ.

Switchable phantom power is available on channel one only. The jack section of the ‘combi’ connector on that channel accepts line sources and the one on channel two accepts instrument sources. Input 3/4 is stereo at line level and accepts jack plugs, for the connection of keyboards or similar sources: it has only a high/low gain setting and a level pot. Inputs 5/6 are via RCA phono connectors, and are intended for connecting consumer music players, again with a high/low gain switch and a level control. A further level control is provided for the USB audio return from the computer and there are two headset mini-jack connectors, one labelled ’To Ch1’ and the other with a headphone logo. These are used for connecting headset mics that may also incorporate headphones. A further mini-jack accepts iPod inputs and suchlike.

A three-way slide switch selects the input source that feeds into the computer, the choices being Dry Ch 1/2, Input Mix and Loopback. The last two are self-explanatory, but Dry Ch 1/2 allows you to hear the signal with effects, but to record them dry. Basic metering is included, with a green signal-present and red clip LED on the output.

Separate level controls are fitted for the main headphone output (quarter-inch jack) and the stereo speaker output jacks, with a button for muting only channels one and two in the monitors — something you might want to do if monitoring these back from a DAW. There are also two main mix output jacks and a footswitch jack, for killing the reverb effect. On the rear panel is a USB port and a second mini-USB connector for external power (USB charger or battery equivalent) when the device is being used with a tablet rather than a computer. No cable or PSU is supplied for this and a Camera Connection Kit is required for use with an iPad. The price also includes a downloadable ‘lite’ version of Cubase (Cubase Al) and a standard USB cable.

As an audio interface, the AG06 sounds clean and the mic amps don’t disappoint. However, the guitar-amp modelling is a touch noisy, and there’s no way to moderate the amount of overdrive other than backing off the input gain control slightly, unless you use the software editor. Similarly, the reverb, which is of decent quality, is piled on rather thickly unless you use the software to tweak it. The compressor works smoothly, but again you need software to adjust it if tweaking the input gain doesn’t give you enough range.

One issue you may come across is that, when used with a laptop and headphones, you probably won’t have a system ground, and so the guitar-noise problem gets a lot worse. In such cases grounding one of the screws on the mixer case is probably a good idea — you can buy special grounding plugs where all the pins are plastic other than the ground pin.

Everything works as Yamaha intended and I can’t criticise the audio quality given what these things sell for. The lack of front-panel EQ or pan pots means the live applications of this ‘mixerface’ are limited, but even if you ignore the mixing and DSP effects side of things altogether, the price is pretty attractive for a 24-bit interface with mic preamps that can run at up to 192kHz sample rates — and it certainly won’t take up much space on your desk. Add a mic and some headphones to your computer and you have a working studio setup, and you won’t even need to buy a DAW if Cubase AI meets your needs.

Finally, if all this is more than you need, there’s a smaller AG03 model. This offers essentially the same functionality as the AG06 but omits the amp modelling and has only a single XLR channel with Comp/EQ and Effects. Paul White