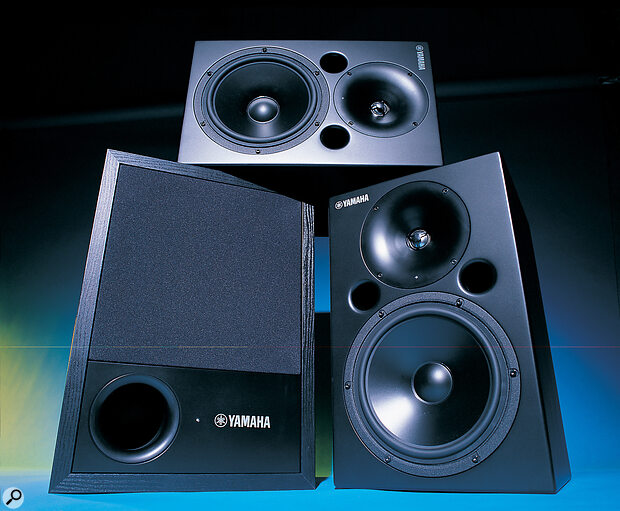 The market for good but affordable 'reference' monitor speakers seems almost boundless and Yamaha have recently joined the fray with their active MSP10s and associated subwoofer, the SW10. Hugh Robjohns digs out his test discs again...

It seems that everyone wants to get in on the act when it comes to mid‑budget monitor speakers, and the latest addition to Yamaha's range is an active two‑way design with optional subwoofer. The MSP10 is the bigger brother to the existing MSP5 and costs around 20 percent more. The partnering subwoofer, the SW10 brings the total system cost up to around £1200, pitting Yamaha's system against a lot of very credible speakers indeed. For example, the Genelec 1029A/1091A and the HHB Circle 3/Circle 1 satellite/subwoofer combinations sit either side of it, and the Mackie HR824, JBL LSR28, Tannoy System 800 and the Spirit Absolute 4P (all two‑way active monitors without dedicated subwoofers) hover in much the same area. These are all decent speakers, so Yamaha's new units have much to contend with. 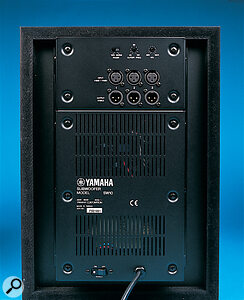 The MSP10 has a distinctive appearance, sharing many features with its junior sibling. The reflex cabinet is vented to the front midway up the cabinet via a pair of one‑inch ports, each roughly four inches long and slightly flared at the exit. The 200mm bass/mid driver has a fairly long throw capability, whilst the tweeter consists of a 25mm titanium metal dome, complete with a phase plate‑cum‑protection grille. B oth units are magnetically compensated and the tweeter is recessed into a shallow horn or waveguide, much like that of the Mackie HR824, which helps to shape the wavefront as well as bringing the treble driver into closer mechanical and time alignment with the bass‑mid driver. Also let into this face plate is an LED, which lights green when powered and red if the amplifiers clip.

The cabinet is constructed sturdily and is well damped, with plentiful acoustic wadding visible at the rear of the reflex ports. Dimensions of 265 x 420 x 262mm make this a compact, but not small, speaker and MSP10 weighs a solid 20kg. Much of this weight is attributable to the amplifier chassis bolted to, and extending 62mm from, the rear of the cabinet. This metal‑framed enclosure extends the depth of the cabinet to 329mm.

The top of the amplifier pack carries a three‑pin input XLR for a balanced analogue signal. A miniature potentiometer control allows the input sensitivity to be adjusted up to a maximum sensitivity of ‑6dBu, with a centre detent at a nominal +4dBu. Three slide switches adjust the matching parameters of the MSP10, the first introducing a steep high‑pass filter with a cutoff frequency of 80Hz, intended for matching the unit's bass response to that of the SW10 subwoofer. The other two are three‑position slide switches providing high and low frequency‑balance trim options. The high frequencies can be adjusted by ±1.5dB above or below the nominally flat position at 10kHz, while the low‑frequency end can be reduced by either 0, 1.5 or 3dB at 50Hz. The tweakability, then, is limited, but sensibly restricted and useful in practice to help tune the speaker to its operating environment.

The base of the amplifier chassis contains only a rocker switch for the mains power, with an integral power lead. The internal line‑level crossover has 30dB/octave slopes centred at 2kHz and feeds a pair of amplifiers — 120W for the bass and 60W for the treble, both generating 1 percent THD at full power.

The complete MSP10 can produce a sound‑pressure level of 110dB at one metre, and covers the frequency range from 40Hz to 40kHz relative to the ‑10dB points. The 3dB limits are closer to 55Hz and 30kHz, and the supplied frequency‑response chart shows a very pronounced resonance at 25kHz — not untypical of a metal‑dome tweeter. The mid‑band appears commendably flat, with a few mild perturbations in the crossover region and a gentle low‑frequency rise just before a rapid plummet from 70Hz.

Setting up the MSP10 loudspeakers as full‑range monitors in their own right was relatively simple and presented no problems. I tried running them from both balanced and unbalanced sources with equally good results, and the adjustable input sensitivity was more than sufficient to accommodate domestic line output signals as well as professional levels.

With these monitors set in their 'flat' mode, I felt they sounded a little on the bright side in my room — I found them a little fatiguing and hard work to listen to over long periods. Switching the HF response down to the ‑1.5dB position on the second day of listening helped considerably, but didn't make them sound in any way dull. Of course, the perceived spectral balance will be heavily influenced by the acoustic properties of the room and I suspect that in a well‑damped environment the flat position would be quite acceptable.

These speakers are quite analytical and unflattering in the way they present sound, particularly at the top end, which is an ideal feature for a monitor, and they have plenty of 'welly' (to use a technical term!) for a medium‑sized room, with ample dynamic headroom. They also produce a very stable and detailed stereo image which possesses quite a lot of depth on suitable material. The 'hot spot' working area is wide for a nearfield speaker and the overall timbre of the sound remains consistent over a usefully broad working area — leaning over to equalise a source on channel 1 of an eight‑buss console shouldn't result in unpleasant surprises when you return to the middle! Though transient response was very fast, it didn't match the all‑at‑once 'slam' of the very best professional monitors, indicating that time‑alignment between treble and bass drivers may not be as precise as might be liked.

The mid‑range and bottom end sounded just a little recessed or hollow with the bass response switch in its flat position, although I was forced to position the MSP10s well away from walls for most of the auditioning. Further experimentation later showed a significant improvement when they were supported on high‑quality stands. The deep bass response of these modest boxes was respectable enough for reliable judgements about bass instruments and percussion.

Introducing the subwoofer into the equation involved considerably more time to find the best setup. I have always found optimising subwoofers to be a very frustrating process with little in the way of logic or science to help. It really does come down to a lot of trial and error in moving things around, adjusting the relative volumes of sub and satellites, and optimising the cutoff frequency. Flipping the phase over can also make a dramatic difference, making a 'no‑hoper' position suddenly work very well! It probably took me a little over an hour to arrive at a setup and balance I was happy with, although I suspect that some of the LF ripples of the room that started to become apparent with extended auditioning could have been further improved given more time.

Introducing the sub into the system brought a small but worthwhile improvement through extending the bottom end another octave or so. It also took some of the load off the satellites and therefore provided a little more headroom, although it would take a real headbanger to feel the need for that — these are pretty loud boxes anyway! The crossover into the sub seemed to work well at its 80Hz setting (with the equivalent HPF switched into the MSP10s) and although I experimented a little I couldn't really better the performance obtained this way. Leaving the satellites set flat and still using the sub didn't work too well as the crossover between the two became poorly defined and I couldn't find physical positions for the three boxes where their multiple LF outputs did not interfere destructively.

Overall, I found the Yamaha MSP10 to be a very credible performer and, on its own, I would rate it well for the modest price. It has a rather brighter, more clinical feel to it than, say, the HHB Circle 3A and is a little louder, but it certainly operates on a similar level. The all‑important mid‑range detail is reasonably informative and accurate, and though it doesn't match that of the HHB Circle 5As, JBL LSR28s or Mackie HR824s, all these units cost nearly twice as much.

The pricing of the MSP10/SW10 combination neatly fills a gap in the market for 'satellite‑plus‑subwoofer' systems, and it will be a very attractive solution for the many who are keen to hear (feel?) what is really going on in that bottom octave. However, those with this sort of budget who value mid‑range clarity, detail and neutrality above flapping trouser turn‑ups should also consider seriously the option of spending a comparable amount on full‑range active nearfields (if there can be such a thing) such as the aforementioned Circle 5A or Mackie HR824, or the Genelec 1030A or Harbeth Monitor 20A.

The MSP10s can manage a perfectly respectable bottom end for a mid‑sized nearfield and they didn't sound as though they needed a subwoofer — unlike, for example, the Genelec 1029As. However, the addition of the SW10 does bring some benefits in greater LF extension and power handling, albeit at the cost of rather more setup time, and presents an attractive upgrade path — buyers can start with the MSP10s and then add the SW10 when further funds become available.

The subwoofer is not designed to complement only the MSP10s, although it is an ideal partner for these particular nearfield speakers. Its large reflex‑loaded cabinet measures 328 x 459 x 407mm and weighs 26kg, with a front‑facing port below the forward‑firing driver. As with the MSP10, a small LED indicates green when powered and flashes red if amplifier clipping occurs.

The drive unit is a 250mm magnetically compensated design powered by an internally bridged 180W amplifier pack. This is housed in a metal chassis extending 69mm back from the back panel of the cabinet, allowing good ventilation. Three inputs are provided, all on balanced XLRs with passive loop‑throughs, again on XLRs. These make it simple to integrate the sub: two of the inputs take 'sniffs' of the low‑frequency components of the left and right satellite signals, while the other one can be hooked up to a centre channel or a dedicated low‑frequency effects feed. No high‑pass filtering is applied to the signals passed on via the loop‑throughs, but if the unit is connected to MSP10s, they will apply suitable 80Hz filtering anyway.

The signals from these three inputs are individually buffered and combined before feeding a master volume control, a low‑pass filter with a cutoff frequency adjustable from 40‑120Hz, and a switchable polarity inverter. Both the gain and the filter cutoff frequency controls are screwdriver‑preset types with centre detents to identify the 'normal' settings (mid gain and 80Hz cutoff).

The subwoofer has a ‑3dB response reaching from 27Hz up to between 45 and 120Hz, depending on the setting of the low‑pass filter control. Input sensitivity is around 2dB higher than that of the MSP10s but the unit is capable of matching the same peak sound‑pressure levels. The polarity switch is provided to help align the acoustic output from the subwoofer with that of the satellites, and it certainly pays to spend a considerable time experimenting with the positioning, polarity, level and cutoff frequency to find the best compromise.

A mid‑priced active two‑way system with optional subwoofer. Capable of good results on their own, and offering an extra octave when partnered by the SW10.