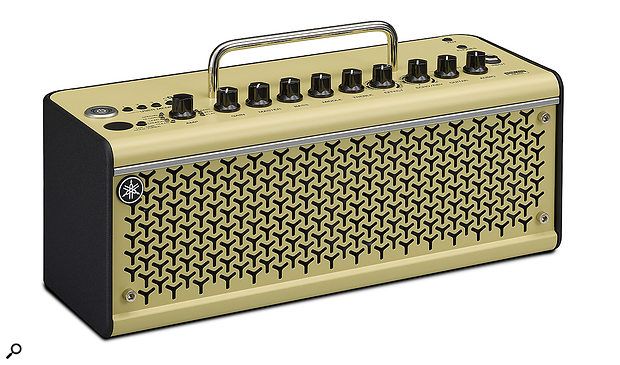 Though small and quiet, this stereo combo is big on possibilities...

The THR10 II is the smallest in Yamaha's II series, measuring just 368 x 183 x 140 mm and weighing only 3.2kg. Despite this, and looking like a typical lunchbox amp head, it's actually a tiny combo that caters not only for electric guitar but also for bass and acoustic guitar. What's more, it has stereo capability: as well as the digital modelling side of things, it houses a pair of robust 3.1-inch speakers, each driven from its own amp.

Yamaha describe the two THR10 II amps (there's a standard THR10 II and a 'wireless' THR10 IIW version, of which more later) as 'third amplifiers', for use on occasions when serious sound quality is required but excessive volume isn't. And judging by the tests I've conducted, it could certainly earn its place either in a studio that's stuck for space, or one in which there's a need to keep a check on sound levels.

While the name suggests this might be a 10W amp, it is in fact rated at 20W when powered by its included mains adaptor, or 15W when running off its internal lithium battery. (The latter gives you around five hours of playing time, so if you fancy trying your hand at busking or playing at the bottom of the garden you're good to go.) Although it's not monstrously loud, it still packs a hefty punch if you crank it up, and it could even be loud enough for a small pub duo gig if you don't have to compete with a drummer. For those who are new to the world of recording, both versions come with a download code for a free copy of Steinberg's Cubase AI (for Mac/Windows) and Cubasis LE (for iOS) DAW software.

The THR10 IIW wireless version, which is otherwise identical to the non-wireless version, caters for wireless guitar playing using the optional Line 6 Relay G10T transmitter. It works only with the G10T, not with older Line 6 Relay radio transmitters, and it charges the device for you as long as the amp is connected to a mains power supply, so you won't need to purchase a separate charger. All you have to do is plug the Relay G10T into the input jack, which causes it to sync its transmission channel with that of the receiver built into the amplifier. As it works on the 2.4GHz wireless band, the Relay G10T requires no licence.

The THR10 II caters for both an aux input and a headphone-emulated output.

The bottom, rear and sides of the cabinet are made of thick, moulded plastic, but the top panel and speaker grille are fabricated from sheet metal, giving the amp a robust, professional feel. Orange LEDs glow behind the grille, and the power button has an LED ring that also lights orange when powered up. When powered down but still plugged in, it turns green to indicate that the internal battery is charging.

...the quality and sound is impressive for an amp of this size, and the app and USB interfacing make it really versatile.

The THR10 II features some inbuilt effects, a choice of amplifier type, and the ability to play back external audio in stereo, for when you get the urge to play along. There's a USB port for connecting to the free editor app, which comes in two versions: one for Mac/Windows machines, and a mobile version for both iOS and Android. Usefully, it's also possible to record and play back directly via USB; the amp appears as a class-compliant interface. Another DI recording option is the speaker-emulated headphones output — you can connect this to your audio interface's line input, or feed it into a more powerful amplification system if you need to. (The main speakers are muted when phones are connected.) Should you be looking for more, it's worth mentioning that the larger THR30 II has a dedicated line output for this purpose. 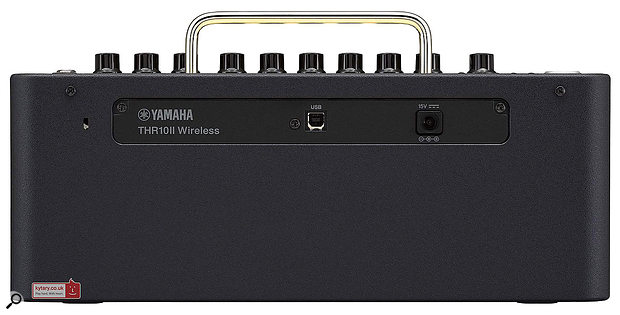 On the rear, you'll find a USB connector — the THR10 II is also a class-compliant stereo USB audio interface.

The amp models are all based on Yamaha's established VCM component-level modelling, and they are controlled using Gain, Treble, Middle and Bass knobs, along with the amp's Master volume control. Two further controls adjust the overall levels of the guitar amp sound and the external Aux stereo mini-jack or Bluetooth source. Five buttons allow the direct storing and recalling of presets.

From the front panel, you can access eight models, including acoustic, bass and flat. But this range is expanded considerably when the app is running, because this provides a choice between Modern, Boutique and Classic versions of the selected amp type. The electric guitar amps are designated Clean, Crunch, Lead, Hi-Gain and Special. Two familiar 'segment'-style rotary controls are used for selecting and adjusting the modulation effects (Chorus, Flanger, Phaser, Tremolo) and the delay/reverb effects (Echo, Echo/Reverb, Spring Reverb, Hall Reverb), and turning these fully anti-clockwise turns off the effects. A tap-tempo button, normally used to set delay times, activates a very accurate chromatic tuner if held down for a second or two. 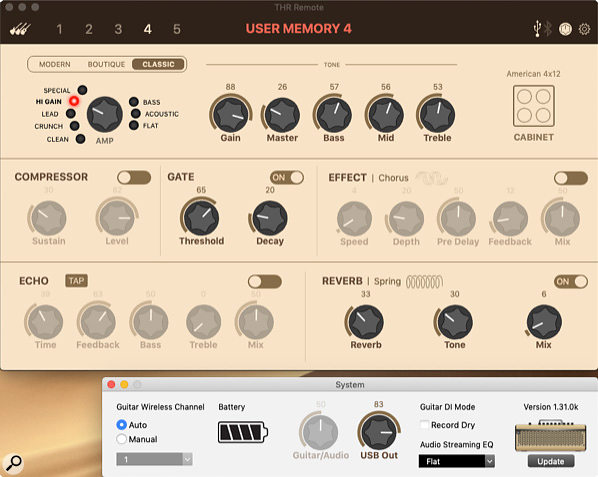 The companion app gives access to lots of additional functionality, including more cab models and more parameters for each effect.

The app offers you greater control over the effects, though, as well as providing a choice of four appropriate cabinet emulations per amplifier type. In addition it allows access to an internal gate and compressor and allows more alternative reverb types to be selected (Room, Hall, Plate or Spring). The Plate sounds beautifully rich and 'three-dimensional'. Other app features include setting the guitar DI mode as dry or with effects, choosing an EQ profile for the auxiliary audio input, and giving an indication of the battery's current charge level. Any of the app-only options, including the three amp variants, can be stored as presets in the THR10 II, so you only need to revisit the app when creating new presets that require these deeper functions.

Both the quality and range of sounds available from this little amp came as a pleasant surprise. Using the app to navigate the three flavours of each of the amp settings and try different cab models I could get close to just about any of the classic guitar tones. What's more, you still get the sense of low-end punch that you'd expect from a larger combo, which is impressive from such small speakers. Those on-the-edge sounds that break up as you dig that bit harder into the strings can be set up fairly easily using the Crunch Amp setting, and dialling in a sound that has just a little 'hair' to take away the sterility makes for convincing chordal tones. Its more rocky tones also stack up well against other good-quality modelling products. The amp deals with bass very effectively at modest levels, yet it's clean enough and bright enough to work with acoustic guitar using the Acc setting.

Yamaha also use their own stereo enhancement system, called Extended Stereo, to create very spacious effects and that's particularly noticeable on the reverbs. The general quality of the effects is excellent, as you'd expect of Yamaha. Editing them only via the front panel limits your options a little, but the app allows for more flexibility, especially when using the reverb/delay setting. As well as adjusting the individual effect settings in greater depth (you get around the same number of controls for each effect as you would on a pedal of the same type), you can balance the contribution of each of the two effects.

The headphone output is very usable as a DI feed, complete with stereo effects, and that will be useful to some, but I found I still preferred the experience of putting a mic in front of the amp. It doesn't have to be turned up loud to sound good over a mic, and you can always add some stereo ambience later or use two mics if you want to capture some of the stereo spread on the effects.

So, overall, the quality and sound is impressive for an amp of this size, and the app and USB interfacing make it really versatile. The THR10 II may look compact and cute, but it's certainly no toy. Whether you prefer the wireless model or the standard one depends on your requirements and budget, of course. You'd still need to buy a Line 6 Relay G10T to go wireless, but if you do need it, the wireless implementation is very elegant.

A surprisingly mature-sounding little combo that has serious studio applications as well as practice, live and mobile uses. The wireless version is easy to use, for those who need it.