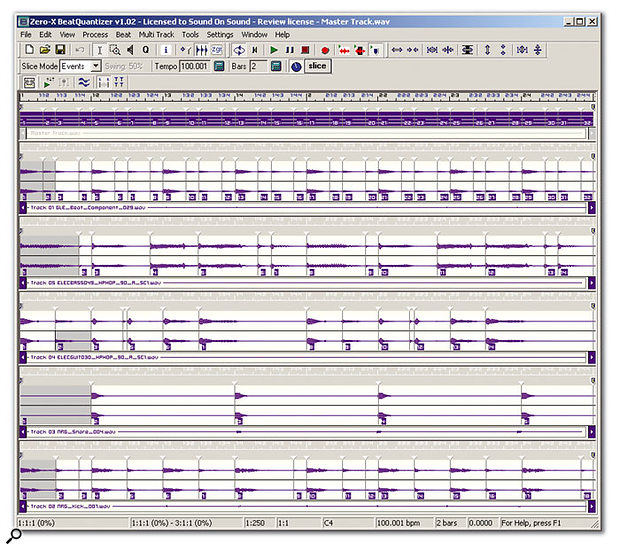 The Master Track (at the top of the screenshot) is key to Beat Quantizer's multitrack 'slice and quantise' capabilities.

If you are an avid slicer of beats, then Zero-X's latest offering might just appeal. With its support for multitrack slicing and quantising, is Beat Quantizer the best thing since sliced bread?

Only those who have been locked away in a very dark corner for the last few years can have failed to notice the rise and rise of software tools designed for slicing and dicing audio beats. As demonstrated by Simon Price's recent beat-slicing masterclass (SOS June 2004), these tools are now available whatever platform or sequencer application cranks your particular handle.

Swedish-based Zero-X have a pedigree in this field with Beat Slicer and Beat Creator. While the former is a slicing tool, Beat Creator also offers quantising options, but both are restricted to use with a single mono or stereo track. Beat Quantizer adds multitrack support to the mix, allowing several loops to be manipulated together and quantised to the same groove. An obvious application is for tightening up a multitrack drum part — with snare, kick, hi-hat, and so on all recorded on separate tracks — but it is also possible to apply a groove to guitar, keyboard or bass parts.

Beat Quantizer's loop-slicing features are more than capable of the sorts of processes described by Simon in his masterclass article, but they can also do a lot more besides. Like Propellerhead's Recycle, Beat Quantizer is a stand-alone application — any loops must be opened within the application, sliced and diced, and then exported again prior to use within a sequencer or other audio application. While using a slicing tool within a host application (such as Phatmatik Pro or Cubase SX's Hitpoint functions) has some advantages, in practice, the stand-alone nature of Beat Quantizer is not such a big deal — the benefits of multitrack support certainly outweigh any disadvantage here.

When working in multitrack mode, it is easier if each audio file is the same length and tempo, although tools for tempo and/or pitch adjustment plus a loop multiplier (which, for example, can make a copy of a one-bar loop so that it has a length of two bars) are available via the Process and Edit menus if required. The quality of these tools seems to be good, and quite marked tempo reductions are possible before obvious audio artifacts appear.

From the Beat menu, each track is sliced individually into beats, and the series of slice markers created is termed a 'grid'. As with similar beat-slicing applications, the user can adjust the sensitivity of the slicing process and slice markers can also be added, adjusted and deleted manually. Although the user interface is perhaps not quite a slick as that of Recycle, the slicing process itself seems very effective. If slicing is all that is required, Beat Quantizer can then output each sliced track in a variety of popular formats. These include Acid ised WAV files, REX, MIDI and Beat Quantizer's own ZEX format. However, simply slicing loops for manipulation elsewhere would be missing out on the 'Quantizer' bit of this application's name — and much of the creative fun that it provides. In essence, Beat Quantizer is a lot like the Beat Detective tool in current TDM versions of Pro Tools.

As well as the core functionality described in the main text, Beat Quantizer also provides a neat collection of ancillary features. A few highlights include:

In both single-track and multitrack modes, Beat Quantizer can also quantise sliced loops, either to a fixed beat such as 16ths (a 'static' quantise) or to a groove. This groove can be read from a pre-saved file but, by utilising Beat Quantizer 's Master Track (created via the Multi-Track menu), groove quantising a series of loops becomes a much more intuitive process.

This is perhaps best explained by means of a brief example. For the purposes of testing, I loaded five two-bar loops into Beat Quantizer featuring kick drum, snare drum, hi-hat, bass guitar and rhythm guitar. These were taken from a rapid mix-and-match session done in Acid Pro 4 and, while the loops worked well enough together in terms of style, they were fighting with each other a little in terms of timing. 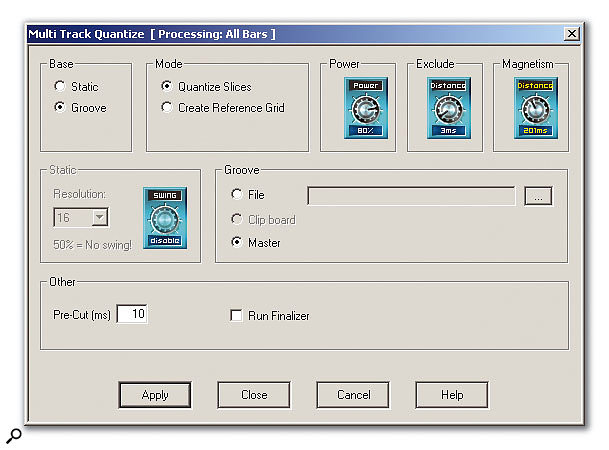 The user has good control over the quantise options.

Having sliced each loop, I then created an empty Master Track (this appears at the top of the track list). Slice markers from one or more tracks can be copied to the Master Track, and in this case I copied the slice markers from the kick and snare tracks, since they were the main elements in the arrangement that defined the groove. Beat Quantizer 's quantise functions were then used to apply this 'master' groove to the other tracks. Like most MIDI sequencers, Beat Quantizer can push and pull events towards the groove represented by the Master Track slice markers, and a selection of controls helps the user dictate how tightly this groove is applied. Once the tracks are quantised, Beat Quantizer will then play back the loops together so the results can be auditioned. In my simple example, this process produced an instant tightening of the hi-hat, bass and rhythm guitar performances relative to the kick/snare pattern, and the result was much more musical than the original combination of the unprocessed loops.

Of course, having created a tight groove from these performances, it is perfectly possible to produce some variations on it. Having saved the initial snare/kick-driven groove, I then repeated the process using the slice markers from the hi-hat pattern to control the groove quantise. What resulted had a noticeably different feel, while clearly being the same musical performance — and using the two grooves at different points within a song structure helped to provide some subtle variety that can often be missing from loop-based music.

Once a loop has been quantised, it is then 'finalised' — Beat Quantizer smooths the gaps or overlaps between any audio slices that have been moved by the quantise process. Again, the user can control exactly how this smoothing operates, and one useful element here is the 'pre-cut' feature that defines a short period of time prior to each slice marker, which is included as part of the slice. This means that the initial stages of a transient are not lost when two slices overlap. Whatever processing Zero-X have going on behind the scenes here, the end results are very smooth. The processed loops can then be exported as new audio files (Acid ised WAV and REX are both included amongst the various export options) and returned to a sequencer for incorporation into a full arrangement.

In use, I would only have two minor criticisms of version 1.02 of Beat Quantizer. First, there are a small number of quirky things about the user interface that occasionally result in a few extra mouse clicks than are perhaps necessary to perform some tasks (for example, you have to clear a warning box each time a slice grid is cleared, and it would be nice to have the option to disable this). Second, the PDF manual, while very informative, still needs a little polish. However, Peter Segerdahl, the programmer behind Beat Quantizer, seems to keep up a steady stream of updates, so I suspect some of these (very minor) rough edges will disappear as development continues.

It is possible to achieve the same 'slice and quantise' results with some pre-sliced loops via Dr. Rex in Reason or using Hitpoints in Cubase SX, but as a dedicated tool, Beat Quantizer is certainly a very efficient environment to experiment with this sort of groove manipulation. Providing extreme time-, tempo- and pitch-shifting is avoided, the processing generally provides glitch-free results.

While it is priced just far enough above the £100 mark not to be considered an instant purchase for the hobbyist, for those who need to tidy up some sloppy live drumming or who would like more control over the groove of their loop-based music, Beat Quantizer is a very useful and creative tool. There is some well-established competition, but for all slicers and dicers of loops, Beat Quantizer certainly deserves a test drive — and potential purchasers can do just that, as a save-disabled demo is available via the Zero-X web site.

Beat Quantizer is a well-featured beat-slicing tool, with the added bonus of very effective and creative groove quantise functions.