Dynamics vs Capacitors vs Back-electrets By Paul White

The type of mic you choose for a given task can have a profound effect on the quality of the resulting recording. Paul White sorts out the dynamics from the capacitors.

In theory, the microphone is just an electronic ear — point it at a sound source and it should pick up pretty much what the human ear would. Unfortunately, this over‑simplification has a flaw — it's over‑simple. The perfect microphone doesn't exist, and while some of the top models are very good, the ability of the human ear to resolve sounds varying in level from the proverbial dropping pin to an exploding tank‑shell takes some beating. What's more, we can't all afford top‑end microphones, and lower‑cost models invariably have to compromise on performance somewhere along the line. The purpose of this article is to look at various types of microphone, and to discover which jobs they can manage and which they'll fall over on.

The live music market accounts for the majority of low‑cost dynamic microphone sales (that's not counting the really cheap, nasty models inflicted on the domestic audio market), but a significant number of these mics also end up in home studios. By examining how this type of microphone differs from the 'perfect ear', it's easier to get a handle on what they might reasonably be expected to cope with.

Dynamic mics are useful when the sound source is close and reasonably loud. 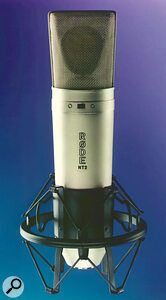 A typical budget dynamic mic has an upper frequency‑response limit of around 16kHz, as opposed to the 20kHz or so of a good capacitor mic. The human hearing range is always quoted as extending up to 20kHz, even though few can actually match this. Subjectively, the result of this curtailed upper response for dynamic mics is that most of them don't do justice to very high‑frequency sounds such as cymbals, bells, or the upper harmonics of the acoustic guitar or piano. They'll make a fair stab at the job for demo purposes, but if you compare the result to that achieved with a capacitor mic, you'll notice that a lot of the 'air' and transparency around the top end is missing.

Another feature of the typical stage dynamic mic is that it has a 'cardioid' pickup pattern (picks up sound better from one direction). This can lend the microphone a slightly nasal quality, especially in low‑cost models, but more significantly, it also results in what we call the 'proximity effect'. Most mic users will know that when a cardioid model is used very close to the sound source, as it is in stage vocal applications, the bass end rises considerably. To stop this bass rise from getting out of hand, the designers put in a deliberate low‑end roll‑off below 100Hz or so, but the outcome of this is that whenever the mic is used at a distance of more than a few inches from the source, the sound will be noticeably bass‑light. Designers also tend to put a presence boost at around 3‑4kHz, to help vocals project better in a busy mix, but in more discerning studio applications this can lend the mic a slightly 'honky' quality. In my experience, models with a presence peak at around 5 or 6kHz sound smoother for studio use than those with a peak at 3kHz.

The final shortcoming of the dynamic mic is its restricted sensitivity. Sensitivity is simply a measure of how much electrical signal comes out of the microphone for a given level of audio input; the less sensitive a mic, the more amplification you need to get the sound up to a useful level. As you've probably already noticed, the more you turn up the gain control pot on a mixer's mic preamp, the more hiss you get, and the less sensitive the mic, the further up you'll need to turn the control to get the level you need. In practical terms, this means that dynamic mics are fine for loud sounds, such as drums and electric guitar, and they're good for medium‑level sounds at close range, such as vocals, but they can fall down badly when you try to record quiet or distant sounds. To summarise:

An audio chain is only as good as its weakest link, so there's little point in using a top‑price capacitor mic with a cheap cassette multitracker. 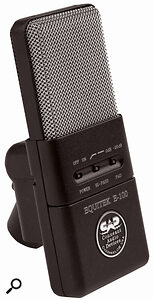 Capacitor microphones are the mainstay of professional recording and are characterised by high sensitivity and a good high‑frequency response. Though a capacitor mic can tackle any job that a dynamic model can, dynamic models still tend to be used for bass drum and tom recording because of their physical strength (drummers are notoriously bad shots!), and because of their good mid‑range punch. However, some engineers use capacitor mics for drum‑kit recording where a more natural sound is required — in jazz recording, for example.

Studio vocals are generally recorded with capacitor mics, though some rock singers like to use their dynamic models to give them a more punchy, middly sound. Mick Jagger and Phil Collins are reputed to prefer recording via dynamic models, so even if you do have access to capacitor mics, try recording your vocals via your dynamic mics and compare the results. You might be surprised at which you prefer.

For instruments with lots of top‑end detail, capacitor mics are unsurpassed, and the same is true of quieter sounds, where the increased sensitivity of the capacitor model is a real bonus. Furthermore, it's possible to build dual‑diaphragm capacitor microphones with switchable pickup patterns.

It sounds as though capacitor mics have all the plus points, and in many ways they do, but they tend to be expensive when compared to dynamic microphones and they're not quite as robust — and if you damage them, they cost a lot more to fix. Modern models do tend to be reasonably tough, but most capacitor mics (with the notable exception of RF models, such as the Sennheiser MKseries), suffer if they're used in high‑humidity environments where condensation is allowed to form on the capsule. Though the effect is not permanent, condensation may cause a loss of sensitivity, intermittent noise, and a dulling of the high end. This is a particular problem when recording close‑miked vocals in a cold studio, though placing a pop shield in front of the mic will help. If condensation does strike, the only solution is to put the mic somewhere warm until it dries out.

All capacitor mics require power to polarise the capsule and to drive the on‑board preamp. Solid‑state models usually run from phantom power, whereas valve models require a separate power supply. To recap:

• Capacitor mics work well in most situations and have sufficient sensitivity to pick up quieter or more distant sounds properly.

Capacitor microphones are the mainstay of professional recording.

Another potential weakness of the back‑electret mic is that the permanent electrical charge sealed into the electret material will weaken with time; some manufacturers claim that the capsule life is around 25 years. You might ask why manufacturers build back‑electret mics if they can only be single‑pattern models and the capsules need replacing every 25 years or so. Well, they can be cheaper to build than true capacitor microphones, and they can also be made to run from batteries rather than phantom power (though not all models offer this alternative). However, battery powering usually equates to a reduction in the maximum SPL that can be handled, and this is a compromise that some manufacturers are not prepared to make. To summarise:

Microphones can be priced anywhere from £50 to over £5000, but a lot can be achieved using models from the lower end of the price range, providing you know what their limitations are. It's worth remembering that an audio chain is only as good as its weakest link, so there's little point in using a top‑price capacitor mic with a cheap cassette multitracker, and, by the same token, a budget dynamic mic isn't going to do justice to that nice new Neve mic preamp you've just bought.

If you're going to spend more than a few hundred pounds on a microphone, it might be worth looking at a separate high‑quality mic preamp to go with it, as the input stages on most project studio recording consoles have to be built to a price and are unlikely do full justice to the capabilities of a really good capacitor mic. As well as obtaining a slight improvement in noise performance, you should also notice a cleaner, more natural sound.

A good microphone might seem expensive, but unlike that computer you've just spent a fortune on, it will never become obsolete, and its benefits will be heard on every recording you make.

Tube microphones tend to combine capacitor capsules with valve preamplifiers. Valves are used in preference to lower cost solid‑state components because they seem to provide a subjectively superior tonality. The benefits of tube mics are similar to those of capacitor mics, with the added bonus of valve warmth and smoothness, but the negative points must be listed as high cost, greater susceptibility to mechanical damage, higher circuit noise and the need for an external power supply. The higher circuit noise need not be a problem in typical studio applications, but where quiet or distant sounds are being recorded, a solid‑state mic is likely to provide a cleaner signal.