Q. Is an Aux and a Bus the same thing? 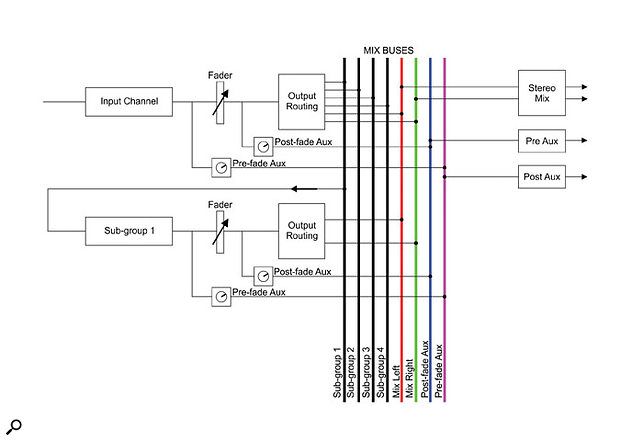 Please help me to understand the terms ‘aux’ and ‘bus’ in the context of a mixer. Is there any difference between them? Do they perform the same function?

SOS Technical Editor Hugh Robjohns replies: All mixing consoles, whether analogue or digital, hardware or software, basically do the same thing many times over — they take a number of signals from multiple input channels, mix them together, and route that mix to an output. That output could be the main stereo mix, or it could be a ‘sub-group’ or ‘bus’ output, or an ‘Auxiliary’ (aux) output. Sometimes you’ll also see output names such as ‘foldback’, ‘effects’, or ‘matrix’, too. But whatever the name, the basic signal‑path structure and mix process is the same.

The names of the different mix output types is generally related to the intended application, and the facilities provided for each type of mix output vary, but usually any mix output can be used for any mix function if necessary.

For example, the main stereo mix is usually created from the post‑fader (and post‑pan) outputs of each of the contributing input channels. An aux output intended for foldback monitoring purposes would usually be created from channel signals derived before the channel fader — so as to be independent of the channel fader’s position, allowing the artist to hear a different mix from the engineer. And an aux used to send a channel to a shared effect — a delay or reverb, for example — will typically be sent post‑fader, so that changing the fader level doesn’t change the dry/effected ratio.

The term ‘bus’ strictly applies to any mix bus, but often it is used to describe an audio sub‑group, which is used to gather and combine a number of related sources to allow overall control via the bus or sub-group fader. Its output is often referred to as a ‘stem’ and typically forms a key part within the final mix. For example, you might ‘bus’ all the drum mics together to allow overall control by one (or two) faders, instead of having to juggle and balance six or more individual drum channel faders.