Q. Is a compressor’s Hold control different from its Release? 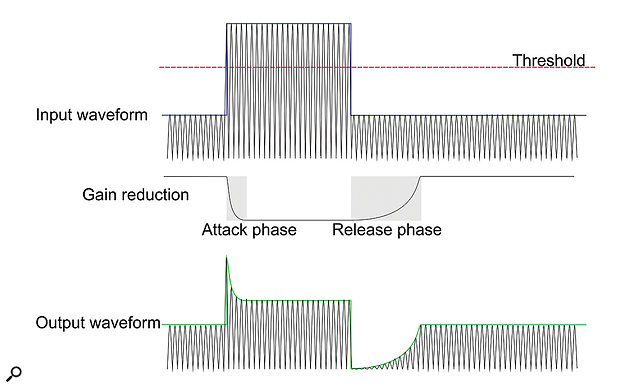 Above: a normal attack-release response...

I thought I had a handle on this, but seem to have a hard time understanding the difference between a compressor’s ‘Hold’ and its ‘Release’. I’ve looked online for one of those guru tutorials with diagrams (I’m a visual kind of learner), but without luck — and now that Cubase’s stock compressor has a hold parameter, the question is a bit less academic! So... can you help me distinguish between a compressor’s Hold and Release controls?

In compressors with a hold facility, the amount of gain reduction is held constant for a while after the input signal falls below the threshold, and only after that hold period has passed is the attenuation restored, again following the release time constant. To have a hold facility is rare on a compressor (it’s far more common on gates), and not often particularly useful, in my view! 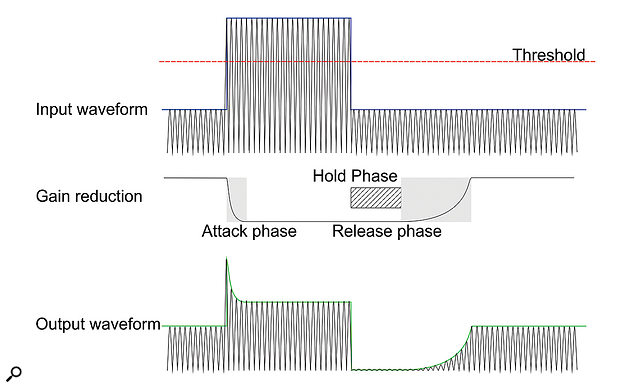 ... and here’s the same input signal with a hold phase before the release.

That said, there are occasions where a fast recovery is needed to maintain the dynamic punch of the material, but the subtle decaying characteristics of percussive instruments can be distorted in an unattractive way if the gain reduction is dumped quickly and promptly between beats. In those rare situations, it can be beneficial to retain a fast release time, but hold off the start of the release for a while after the input signal has decayed naturally. In that way, the percussive decay is retained au naturel, but the compressor still recovers quickly enough to be ready for the next loud percussion strike.

It’s not dissimilar to the alternative scheme of ‘differential threshold’ or ‘threshold hysteresis’, where the threshold for the onset of the attack phase of gain reduction is set much higher than the threshold level needed to start the release phase, which is another rare facility found on some specialist compressors.

I hope that clears things up for you but as you said you are a visual learner, I prepared a couple of diagrams that might help it all sink in.