Screen 1: As you increase the Swing value your notes will take on more of a triplet feel. This can clearly be seen when setting the grid to display triplets by setting the Division to 1/12 and then applying the maximum Swing setting to the eighth-note hi-hat part.

Let’s begin this month’s column with some simple ways to make an eighth-note drum pattern more interesting, and then move on to other time divisions, working our way up from triplets to quintuplets and beyond.

Start by programming a basic eighth-note drum beat at 92 bpm. Create a new software instrument track and, from the Media Browser, load one of the Drum Kit Designer kits. For this example, I am using the Sunset Kit. Create a blank Region and double-click on it to open the Piano Roll editor. From the Tools menu set your left-click to be the Pointer Tool (useful for editing note positions) and your Command-click as the Brush Tool (handy for quickly drawing in hi-hat patterns). The Brush Tool will input notes at the Time Quantise setting in the Piano Roll inspector.

Set the Time Quantise value to ‘1/8 Note’ and use the Brush Tool by holding down Command then click and drag along the hi-hat row to draw in a line of eighth notes. Next, go up to the Control Bar and set the Division to 1/16. This will set the divisions in the Piano Roll grid. When using the Smart Snap setting your editing actions will intelligently snap to 1/16th notes. Now draw in a simple kick and snare pattern — kick on beat one and three, snares on two and four. You can hear this and the rest of the examples by downloading the zip file in the right-hand sidebar or listening to the inline media players.

Now that we have our straight eighth groove, let’s look at some different ways to transform the feel of the groove. In the Piano Roll, select all of the drum events and go across to the Time Quantise area and gradually move the Swing slider from 0 to 100. As you move the slider, hear how it adjusts the eighth-note quantise from straight eighths towards a triplet feel. If you set the Division setting to ‘1/12’ when achieving an eighth-note triplet feel you will see that, when at the maximum Swing setting, each hi-hat falls very close to the first and third triplet of each beat (Screen 1 above).

There are other ways to introduce more of a triplet feel to your pattern that are worth taking some time to explore. For example, take the hi-hats and nudge them to the right until the second of each pair of hi-hats starts to line up with the third triplet of each beat (Screen 2). This will instantly give your beat a lazy or ‘wonky’ feel. Experiment with adding equally wonky kick and snare notes to embellish the pattern.

Screen 2: To give your drum beats a lazy feel set the grid to 1/12, select all your straight eighth-note hi-hats and delay them such that the second of each pair of hi-hats lines up with the third triplet of each beat.

Let’s look at another way of giving your triplets a different feel. To do this, we’re going to look at a classic triplet pattern by the famous drummer Bernard Purdie called the ‘Purdie Shuffle’. The Purdie Shuffle has more of a half-time feel with a snare accent on beat three of each bar rather than two and four. Since it is half time, you will want to wind your sequencer tempo up to between 130 and 140 bpm. Set your Division to 1/12 and your Time Quantise to ‘1/8 Triplet (1/12)’. Now use the Brush Tool to draw in a line of 1/12th notes across two bars. Next, move every second hi-hat in a triplet group down to the snare lane. Select them all by clicking on the snare note then use the Velocity slider to set them all to a velocity of 1. Hit play and you should now hear a classic triplet hi-hat pattern with a snare ghost note on every second note in the triplet. Now input the kick drum pattern and add the main snare on beat three of each bar to imply the half-time feel (see Screen 3). 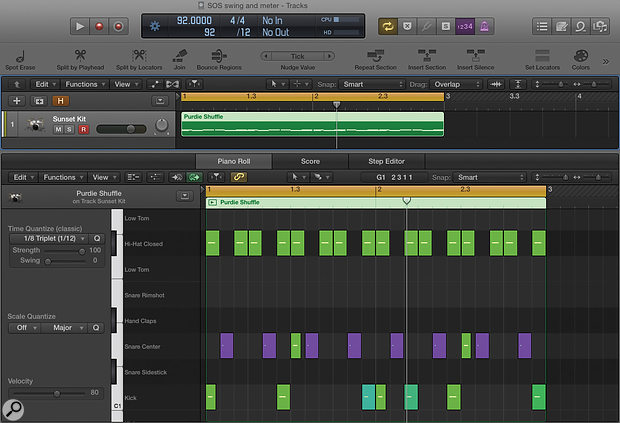 Screen 3: A half-time drum beat inspired by the Purdie Shuffle. This can easily be programmed using the Brush Tool with the Division parameter set to 1/12 and the Time Quantise set to ‘1/8 Triplet (1/12)’.

For a variation on this pattern copy the region and use the Eraser Tool to remove the ghost notes from the snare part. Hit play to audition the drum beat and you should now hear beat one and three of the triplet pattern we were looking at earlier, but this time in the context of a half-time feel.

In It To Quin It

If you are feeling really adventurous, Logic also allows you to easily try out other subdivisions of time such as quintuplets and septuplets. Let’s recreate a variation on the Purdie hi-hat pattern with a slightly different feel by remaking it using quintuplets. Create an empty two bar region and from the Piano Roll Inspector set the Time Quantise parameter to ‘5-Tuplet/8’. This will allow us to input eighth-note quintuplets. Use the Brush Tool to input a line of quintuplet hi-hats. If done correctly you should see 10 notes per bar. However for the beat we are about to program we need to go a stage further and create 1/16th note quintuplets, but as Logic has no option for this time setting we need to double the speed of the quintuplets. To do this go to the right hand edge of the region, hold down the Alt key, and click and drag the two bar region to the left to compress it to one bar in length. You should now have 20 notes per bar. From each quintuplet mute the second, third and fifth notes. Now, input a kick and snare part similar to the Purdie Shuffle but this time using the quintuplet division (See Screen 4).

Screen 4: A quintuplet variation on the Purdie Shuffle.

The quintuplet feel can also be great for programming R&B beats. Let’s copy and paste the previous example and lower the tempo back down to 92 bpm. Now delete the previous kick and snare pattern but leave the quintuplet hi-hats in place. This time draw in a snare on beats 2 and 4. You can now make the drum beat more interesting by adding further drum hits, by copying the hi-hat quintuplets onto the kick and snare lanes, taking care not to let the quintuplet timing slip (see Screen 5). Your drum beat should have a satisfying wonky feel. Logic also has a Time Quantise setting for septuplets (7-Tuplet) and nontuplet (9-Tuplet), and these are well worth playing with if you have the time.

Screen 5: A simple R&B pattern made entirely from the quintuplet time division.

Save It For Later

Once you’ve created some patterns made out of quintuplets and septuplets it’s worth dragging them into your Apple Loops library as MIDI patterns so you can access them as building blocks for create other patterns. You can also save your patterns as Groove Templates so you can quickly apply the lazy feel to other MIDI or audio parts.

To do this, highlight the region containing the rhythm and go to Inspector / Region Parameters / Quantise and choose ‘Make Groove Template’ from the drop-down menu. Select the region to which you wish to apply the quantisation, and from the Quantise menu choose your new template.

To hear some of the patterns we’ve been discussing played by real drummers, check out Steely Dan’s ‘Babylon Sisters’ for the Purdie Shuffle as well as ?uestlove’s performances on D’Angelo’s Voodoo album for some incredible laid back-drumming.