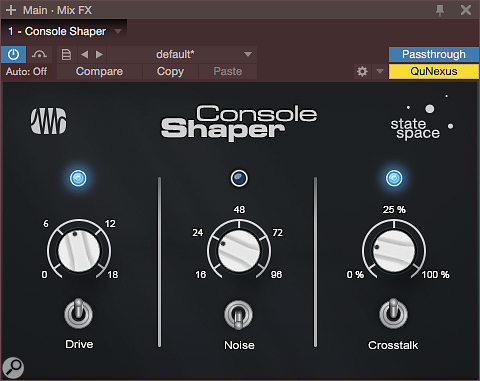 Console Shaper is the first generation of Mix Engine FX and is included in Studio One Professional.

Console emulation is all the rage, and it’s now built into Studio One.

Console emulation and summing are hot topics at the moment. Increasing numbers of people who otherwise mix entirely ‘in the box’ are choosing to employ analogue summing mixers, while there’s also an ever-growing range of console emulation plug-ins on the market. Compared with the latter approach, however, there are obvious advantages to integrating console emulation directly into a DAW’s mixer, and this is what PreSonus have done with their Console Shaper. 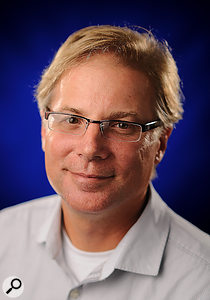 PreSonus President Jim Odom.Console Shaper belongs to a special category of processor that PreSonus call Mix Engine FX. It was first made available in Studio One Professional 3.2, and they’ve recently introduced a ‘second generation’ console emulator called the CTC-1 Pro Console Shaper. For this month’s workshop, I talked to PreSonus founder and president Jim Odom to get the inside track on what gives different consoles their individual sounds, how implementing Mix Engine FX as a feature of Studio One’s audio engine architecture enables more accurate emulation, and how to get the best from CTC-1.

Jim: “There’s a lot of things that create the character of a console; it’s not just the summing bus. What makes the sound is all the input analogue circuits on each channel that finally get the signal to a summing node and out the back end of the console: whether or not you’re running the signal through transformer-coupled inputs, what type of discrete electronics you’re using, and so forth, just to carry the basic signals along the path.

“On the Neve consoles, those are all transformer-based inputs, so that gives the sound character before it ever gets to the summing bus. People said the Neve consoles had a warmer sound; the transformers were wound different on the Neve inputs, and in the EQ, the signal went through lots of capacitors and tapped inductors. SSL was said to have a little bit of a brighter sound that was good for radio; that was kind of accepted practice back in the ’80s.

“A lot of that difference had to do with the design of the channel strips: the type of op-amps or discrete electronics that they used, the headroom available before hitting the summing bus, the amount of crosstalk on the backplane. Those were things our guys looked at, because when they looked at the summing node alone it was hard to find a big character difference between consoles. The summing bus is supposed to be colourless in most consoles.

“We invented this DSP modelling we call State Space to emulate this. State Space Modeling models each of the electronic components individually. Others have done this in plug-ins, but it is what is running now in the back end of Studio One.”

In other words, PreSonus’s Mix Engine FX do not simply apply one stage of processing that attempts to capture the complete contribution of an analogue desk. Instead, they model the behaviour of individual elements before applying it at the appropriate points in the signal chain.

“Let’s say that you want to model a console,” explains Jim. “You can’t just insert a plug-in on the main bus and call it a summing bus emulation because that misses the point. By the time the signal reaches the summing bus it should already have gone through the console’s unique input electronics topology, so you sort of have missed the sound of that.”

It’s not merely a matter of emulating intentional design features, either! “There’s crosstalk because the circuit boards in the old analog consoles were put on backplanes and the backplanes would leak signal back and forth between channels. And all of these things like input topology and crosstalk gave these consoles character in a musical way. 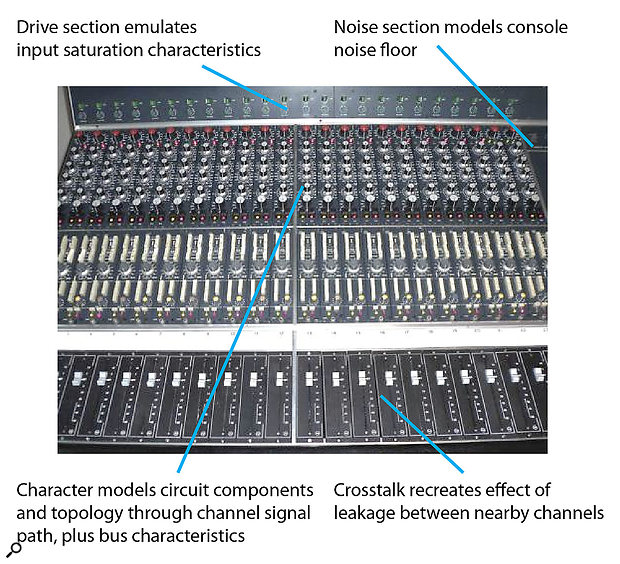 Channel and bus audio characteristics both contribute to the sound of an analogue mixing console. The CTC-1 focuses on three fairly specific colouring mechanisms and the broader Character parameter.

“When you put in the CTC-1 on a bus, it actually installs the ‘character’ electronics on every single channel feeding that bus, and also does a little bit to the final summing node. So now each of your signals routed to that bus is going through a signal path that is an identical emulation of the circuitry of a specific console, and when you change the emulation it’s like swapping out the input electronics on every one of those channels. You really couldn’t do this by inserting a plug-in on every channel and one on the bus because the CTC-1 also emulates the crosstalk. In other words, it can share things down at a very low level in the audio engine between all of the input channels, which lets us emulate the crosstalk of an old analogue console. You can really hear what this sounds like because there’s a Crosstalk more/less knob on the CTC-1. It’s all a mathematical process, so we were able to make a parameter for it.”

In effect, then, using CTC-1 means that each channel carries a mix of that channel’s signal with appropriate amounts of signal ‘leaked’ from other channels. CTC-1 even considers proximity of channels in the Studio One mixer in determining how crosstalk occurs; so, for example, the snare will get lots of crosstalk from the kick channel if they are next to each other, but little to no vocals if those are far away on the other end of the Studio One mixer. PreSonus have also built in a few features to bridge the gap between actual analogue electronics and digital emulations. A gain-compensation feature is included to prevent the output signal from going through the roof when a lot of drive is applied to create input saturation, and a noise gate excises added noise when there is no signal happening.

“The idea of adding these colours is a matter of taste and the type of music. For example, I probably wouldn’t use the CTC-1 while mixing down the LA Opera, but I’d use it on all of my dance and EDM tracks to give some punch and a different vibe. I would take some of these sharp-edged virtual instruments, bus them, and throw the CTC-1 on the bus to see what it sounds like, just to get it that old Neve 8000-series ‘punch’ sound that we used to get. The electronics back then couldn’t deal with these sharp-edged digital synths; it would freak them out. I remember specifically having to deal with that. It did something to the signal, but it sounded really good! Even a lot of video plug-ins are all about ‘I don’t want my perfect picture, I want it to be grainy for this particular scene because I want to paint emotion.’ And emotion in music is fine!”

The CTC-1 is an add-on Mix Engine effect that provides a more refined emulation than Console Shaper. Of the three models offered (Classic, Tube, Custom), the Custom model is not intended to emulate a specific console, but, instead, is a composite of bits and pieces from other models.

Mix Engine FX is an interesting new technology that serves now as a different take on console emulation, and has the promise to be much more in the future. The hope is that third-party developers will also jump in with Mix Engine FX. The architectural difference in approach represented by Mix Engine FX may give those developers pause, but, on the other hand, the flexibility and unique possibilities of the technology present positive incentive for developers, who are always looking for ways to stand apart from the crowd. A conventional emulation plug-in can only be placed in a channel’s inserts section, while Mix Engine FX have access to multiple points in the signal path. This enables emulation of crosstalk, but it also presents some fascinating possibilities for more imaginative and less imitative Mix Engine FX that could be created.