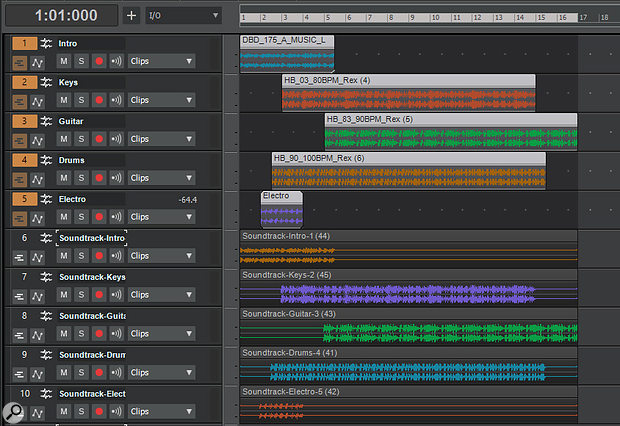 The top five channels were exported as Tracks, and the bottom five tracks show what they look like after being imported — they all extend from the beginning to the end of the project.

Share and archive your projects with Sonar’s extensive exporting options. Here's how...

Sonar offers multiple ways of exporting files, and many options for determining exactly how they’re exported. It’s important to choose what’s best for your needs — so let’s take a deep dive.

We’ll start with the process of exporting audio files so that they can be used by a non-Sonar User. This is the most universal export option — you can even open the files on an Atari ST. The trade-off is that this often uses the most memory for storage, because Sonar intelligently exports all tracks starting from 0:00:00 — even if there was no audio recorded until later. The recipient can simply start all the files at the same time, and they’ll sync up to each other. Sonar also extends durations as needed so that all tracks end simultaneously. Note this means there are no more individual clips, but tape-like continuous tracks.

Type Ctrl+A to select all tracks, then choose File / Export. Note that you needn’t slip-edit the tracks so they start at the beginning, because Sonar does this automatically upon export. When the export menu appears, add a name for the track(s); this will appear before the track name itself. Next, choose your Mix Enable options carefully.

In the left third of the Mix Enable section, for the Source Category choose Tracks. A list displays the names of the tracks being exported. Click on these to de-select or re-select tracks.

In the middle, you can change the sample rate, bit depth, and channel format upon exporting. Don’t be concerned about sample-rate conversion quality, Sonar’s is excellent (see comparisons of various recording software programs at http://src.infinitewave.ca).

Towards the right, enable which attributes should be applied to the track. For example, if you want the exported track to follow any automation, tick the Track Automation box.

The options for exporting files are extensive!

Here are some additional fine points:

It is also possible to export Clips so that they’ll open in the correct place on the timeline, by exporting them as Broadcast WAV Files. These are time-stamped with their start times, so DAWs that can recognise BWFs will line up the clips magically on their own timeline. (However, note that if you export tracks as BWFs, Sonar still creates full-length files even if the Broadcast WAV File export is chosen — it’s relevant only when exporting individual Clips.)

First, choose Edit / Preferences / File / Audio Data, and enable exporting BWFs by default. Then choose the standard File / Export / Audio option, but select Clips as the Source Category, and Broadcast WAV for Files of Type. For File Name, you can give a distinctive name that will be added to all files, like ‘V-Series Soundtrack’, or whatever.

Other options include Choose Follow Source, which maintains the file format (mono or stereo), but pay careful attention to the Mono Export Cautions section. Also note that earlier versions of Sonar saved mono files as stereo if this was selected.

BWF files remember the start time, but not the track relationship. So if a track has four clips and you drag them into Sonar, they will create four separate tracks. You can drag clips associated with a single track one at a time into the track, but you needn’t be precise because they’ll end up in the right place. Finally, unlike when you export tracks, no extra numbers are appended to the audio file names when you export Clips.

Broadcast WAV Files can be exported and imported with time-stamp data intact, so that they’ll always end up in their original place on the timeline.

Sonar can also export the master or hardware bus output, which is usually stereo. If you choose Mono (or in some cases, Follow Source) for exporting, Sonar will treat stereo pairs as single mono files, and will sum them. As a result, anything above -3dB will be distorted, and this cannot be repaired. Using a different pan law that increases centre attenuation does not solve this. Here are four ways to export mono files safely:

Whether you use Split Instrument Tracks (eg. separate instrument audio output and MIDI tracks) or a Simple Instrument Track that contains only MIDI but outputs audio, selecting and exporting will save the resulting instrument audio as a file. However, note that if you also recorded the synth audio as a Synth Recording in the instrument output track (which would happen if you record-enabled at the Track Folder level), and both the instrument output and MIDI Clip are selected — which will happen if you choose Select All — the results can vary.

As to MIDI, exporting the MIDI clips driving the instrument requires exporting them individually when using the Export dialogue. It’s more efficient to select them, open the Browser to the destination folder, and then just drag the MIDI files into the Browser.

Exporting a Groove Clip with any of the conventional export options will turn it into a standard WAV file that does not retain the ‘Acidizing’ transient markers. However, this can be advantageous because if a loop is rolled out for several iterations, the exported file will include all those iterations as part of the file.

To export a Groove Clip, open it in the Loop Construction view. Choose Clip / Save Loop, and specify WAV or Broadcast WAV. However, if creating loops for others, I’d advise against choosing Broadcast WAV because when someone drags a loop into a program that recognises BWFs, it won’t necessarily go where the person intended it to end up. Similarly, if you have Sonar set to Always Import Broadcast WAVs at their Timestamp, you may find that dragging in a loop puts it in a weird place on the timeline — one hour into the project is common for some libraries, so you may think it didn’t import. When importing files from loop libraries, consider unticking the BWF import option.

I recommend playing your mix through from start to finish to make sure that the Master bus level does not exceed 0dB, and also, leave some headroom. For example, if after playback the Master bus shows a peak of +2.7dB, reduce the master fader by at least 2.8dB.

1. Select all tracks, unless you don’t want a track in the final mix (eg. a mix without vocals).

3. For Source Category, choose Entire Mix. Source Hardware Outputs will default to whatever your Master bus is feeding, which is what you usually want.

4. For Channel Format, choose Stereo. For reasons given previously, if you need to save as a mono mix, reduce the Master fader by an additional 3.0dB.

One of Sonar’s absolute coolest features comes into play if you use Mix Recall. If you do, then you’ll have an option under file export for Mix Scenes, and you can choose which ones you want to export. So the next time the guitar player asks for copies of the 47 mixes you made, the correct response is “no problem!”