Q. Can too hot a signal damage a mic?

I’m soon going to be doing my first recording of live drums and it occurred to me that I don’t know the answer to this question. Is it just a matter of getting a distorted signal, or is there the possibility of doing physical damage to the microphone?

SOS Technical Editor Hugh Robjohns replies: Clearly, nothing is completely indestructible, but most mics are pretty robust and will recover from overloads without problems. If the mic is overloaded you will get (a lot of) distortion, but the mic will recover immediately afterwards without any long-term problems. 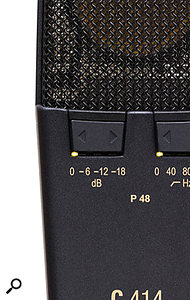 It’s possible for a capacitor mic to overload when used close to a loud drum, and for a mic to output too hot a signal for some mic preamps — which is why many such mics feature switchable ‘pads’, or attenuators.When recording a drum kit, it’s extremely rare to suffer overload problems with the overheads and space mics. The obvious potential problem areas are the close mics, and specifically the snare and kick mics. If you’re using moving-coil mics for these roles you won’t usually have any problems at all with the mic (but you could still overload the mic preamp in the mixer/interface). However, if you’re using capacitor mics you will probably need to switch in the mic’s pre-attenuator just to be safe to avoid distortion during the recording, but you won’t permanently break anything if you don’t.

Moving-coil mics aren’t usually specified with a maximum SPL, and most can accommodate huge SPLs without problem. The vast majority of moving-coil mics have omni or cardioid polar patterns, and their diaphragms tend to be stiff and stiffly suspended. This makes them inherently pretty robust devices. In extremis, the voice-coil and/or diaphragm might hit the mechanical end stops of the suspension, resulting in massive momentary distortion, but that is an incredibly rare situation and you’d probably have to be close-miking something exploding!

Ribbon mics are an entirely different kettle of fish, of course. The aluminium diaphragm material in most ribbon mics is inherently fragile, and the diaphragm is mounted in a fairly ‘floppy’ way, so sound sources that result in an obvious movement of air can cause physical damage to the diaphragm relatively easily (stretching, tearing, or ripping from the mounts being the usual outcomes). Despite this, few manufacturers ever specify a maximum SPL for (passive) ribbons, but my personal rule of thumb is this: put your hand where you want to place the ribbon mic, and if you can feel air movement on the hairs on the back of your hand don’t put a ribbon mic there!

Capacitor (and electret) mics are (almost) always specified with a maximum SPL (for a certain amount of distortion) because the impedance conversion electronics have a finite maximum headroom capability determined by the mic’s internal power rails. Capacitor mic diaphragms are generally very robust, and stretched tightly with minimal movement, so the capsule is unlikely to be damaged by even extremely high SPLs. However, the impedance converter can certainly be overloaded, and often quite easily.

Mics intended for use in very loud situations are usually equipped with a ‘pre-attenuator’ of some form that reduces the signal voltage from the capsule before it goes into the impedance converter. These pre-attenuators are usually in the form of switches to impose 10 or 20 dB of attenuation, but on some mics with interchangeable capsules it may be achieved via a screw-in attenuator module. Some mics designed specifically for very high SPL situations are designed with elevated internal power rails — such as DPA’s 4003/4012 microphones, which operated on a 130V powering system rather than standard 48V phantom.

Overloading the impedance converter will result in anything from modest transient distortion to full-on clipping, depending on how bad and sustained the overload is — but everything will return to normal once the overload has been removed and there will be no permanent damage unless the overload was amazingly extreme!

The other thing to be aware of, as I mentioned earlier, is the potential to overload the mic preamp in the mixer/recorder/interface. The mic might be fine, but it could generate such a high output level that the mic preamp itself could be overloaded. This is not that uncommon a result with moving-coil kick drum mics and some budget mixers, for example. Circuit designs vary, of course, but some mic preamps have what is effectively an input buffer before the main gain control, and it is possible to overload that input stage even with the gain control at minimum. In such cases, use the input pad on the preamp, if provided, or an in-line XLR 20dB pad, or the mic’s own pre-attenuator, if available, to resolve the situation.