Q. How can I improve workflow between Mac- and PC-based sequencers? 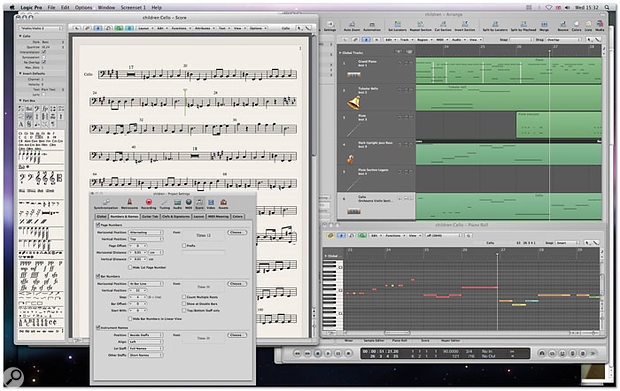 I am a composer working with Sibelius on a PC, and recently I needed to send some pieces to an orchestrator working in Logic on a Mac. I exported them as MIDI ('.MID') files and emailed them to him. He replied saying that Logic would not even recognise them as MIDI files when he tried to import them. He ended up re-entering the shortest of them via a keyboard from a sheet music printout which I posted to him, but we do not want to have to do this for the rest of the pieces as they are much longer and more complex. How can we solve this? I have Cakewalk on my PC if that helps, and I've included the files with this email so you can see what we're doing wrong!

SOS contributor Paul Wiffen replies: Although the interchange of files between the Mac and the PC has become a lot easier over the years, there are still plenty of pitfalls which can trap the unwary. The best thing to do is to try to catch any possible format-incompatibility problems before your project gets underway. So insist on a dry run with simple files before you commit to the suggested workflow.

Of course, this is an ideal way to proceed, and although we could look at your case and say, like the famous Irishman giving directions, that we wouldn't start from here, we've all been in this kind of situation before — in fact I was asked for help by someone in a similar position just the other week, of which more in a moment.

The first thing to consider is whether you can open the files in anything else at all, even if it's not your main program of choice. If not, you may have corrupt files, but if you can, you might be able to use the other program as a 'stepping stone' to your main work application. I put your files on my Mac and also found that Logic does not recognise the MIDI file, despite its 'MID' file suffix — but I was able to listen to the file from the OS X desktop, which uses Quicktime to preview files before they are opened. The choice of instruments was correct and the piece seemed to make good musical sense, so I took this a stage further and attempted to open the files in the Mac's built-in Quicktime Player . This also worked, so adopting my 'stepping stone' philosophy, I tried resaving it from that program, selecting Export in the Quicktime Player and then the 'Music to Standard MIDI' option to save the file.

The Import dialogue browser in Logic was now at least able to 'see' the file — in other words, it was no longer greyed out, but selectable. Nevertheless, the compatibility problems remained, with Logic reporting a 'Data Conflict while reading Track 29' when trying to open the file — and the on-screen result showed merely a one-bar-long part on track one containing no notes. So making the file format recognisable to your software is not always the end of the story.

Although it didn't work here, Quicktime is a good 'stepping stone' candidate in a lot of cases, as it is a cross-platform (Mac- and PC-compatible) technology. When it was a cross-platform application, Logic also used to be very good at this sort of thing — it was sometimes possible to get PC files into the PC version of Logic (even if they wouldn't open directly on the Mac), and then you could save out from there as Logic files which the Mac version could open. Now that Logic is Mac-only, of course, this is not possible, so you'll have to look for other intermediaries. Although I have imported MIDI files for years into Logic for additional work, both from other apps on the Mac and from emailed files from PCs, this is probably the first time I have tried a MIDI file generated in Sibelius , which is of course primarily a notation program. It occurred to me that it might be a better idea to try something more 'sequencer-like' which is still based on the PC, and thought your mention of Cakewalk was on the right lines. I tried loading the MIDI file into that on a PC and exporting it back out. To my delight (and I imagine also to yours!), Logic was now able to correctly import the file via Quicktime without the earlier errors.

Proving that no matter how easy it is to avoid this kind of problem in theory, most of us will still encounter it at some time or another, I was recently peripherally involved in a similar problem with interchanging much bigger and more expensively created audio files. Nuendo on the PC was used for a recording session with the Bulgarian National Orchestra and choir in Sofia, because it was the system of choice of the house engineer. Although the project's American composer and UK-based engineer worked most of the time in either Logic or Pro Tools on the Mac, there are precious few such systems in Eastern Europe, and as it happened, a Nuendo setup was already installed at the National Orchestra's studios. The rental and transport to Bulgaria of either Mac-based system would have been difficult and expensive, so both of them took the Bulgarian engineer's word that he used the industry standard OMF and/or Open TL file-interchange protocols all the time to send people Nuendo sessions to open in Logic or Pro Tools without any trouble. AIFF was chosen as the individual audio file format as it is the most common on the Mac.

However, back in the UK, when the engineer tried to open the transferred files into Logic , he found that they contained no audio. A flurry of phone calls ensued (including one to me, which is how I became aware of the problem). At first, the blame was laid at the door of Logic because it appeared not to be importing anything. However, when the member of the Emagic/Apple team who deals with these interchange formats had a look at what had come out of Nuendo , it turned out that there was no audio associated with the source files.

Eventually, the problem was tracked down to the fact that with Open TL, Nuendo only includes WAV files in the transfer, leaving AIFF files out completely. As all the audio recordings had been made using AIFFs, this was why the Logic import was empty. A test file sent using WAVs as the source audio opened without problems, so now the engineer is anxiously awaiting the recordings converted to WAV format, in the fairly certain knowledge that the files should open OK into Logic .

The precise specifics of such problems are probably not worth remembering, as the chances of you ending up with exactly the same combination of recording software and platform on the original and the receiving systems are fairly small. What is worth learning from this is the underlying message that even if the person with whom you plan to work insists that they do this kind of thing all the time, bear in mind that they do not have the same system as you to test receiving their work on. As a general rule, before you start to plan projects with a workflow based on interchanging songs in standard file formats, it is always best to do a few tests first using things that you can enter quickly, before you spend a long time entering music which then cannot be transferred. Send these tests to your prospective collaborators and have them double-check that they are able to get them open and can work on them before you spend huge amounts of time, energy and possibly even money to create the files you need to transfer.