Q. How can I use a figure‑of‑eight mic with the mid/side miking setup?

SOS Technical Editor Hugh Robjohns replies: Yes, you can certainly use the M/S approach if you want to, and that does provide the potentially useful advantage of being able to adjust the stereo recording angle remotely to set the required image width. 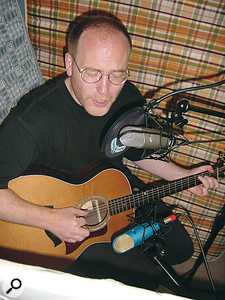 Recording a vocalist with two figure‑of‑eight mics can produce very good results. If the performer wants to play and sing at the same time, careful positioning to reject the unwanted sound from both mics (the vocals from the guitar mic and the guitar from the vocal mic) can achieve excellent separation.However, the left‑right decoded signal from an M/S array comprising two figure-of-eights is essentially two figure-of-eights in an X-Y format: basically the same Blumlein array you are already familiar with. Altering the ratio of Mid and Side changes the equivalent mutual angle of the decoded X-Y mics, and distorts their polar patterns slightly. However, for matched Mid and Side levels, M/S with a pair of figure-of-eights decodes as a perfect Blumlein array. Indeed, this is precisely what Blumlein discovered and experimented with 80 years ago!

If you need to 'get rid' of the rear pickup of the Mid mic, you will have to place an acoustic absorber behind the mic; for example, the infamous SOS duvet, foam absorbers, or even some kind of reflection filter: anything to capture sounds that would otherwise head back into that rear pickup zone.

As for other neat tricks with dual figure-of-eights, there is a technique called the Faulkner Array that uses two figure‑of‑eight mics spaced about eight inches apart and facing forward. The idea is to capture a normal stereo sound‑stage in much the same way as an ORTF arrangement, but with significantly reduced sensitivity to reverberant sounds from the sides and above. It was a technique devised to deal with the acoustics of a church that had nasty side‑wall slapback issues.

Another situation in which I often use two figure-of-eights is capturing a singing guitarist. By careful placement and angling of the mics, it's possible to arrange their deep side nulls to provide a significant amount of rejection of the unwanted source: the guitar mic rejects much of the voice, and the voice mic rejects much of the guitar. If you do this carefully (and assuming the guitarist can sit still and not sway about!), you can achieve 20dB of separation or more, which is a major improvement on the usual dual-cardioid approach!

You can read more about this at /sos/1996_articles/dec96/singingguitars.htm.