Q. How do I fine-tune my reverbs? 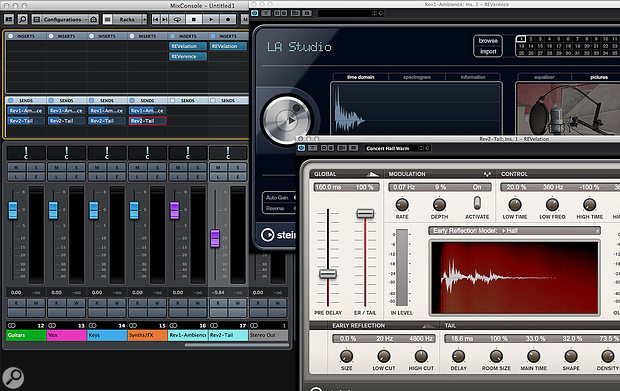 Creating separate send effects for the early reflections and reverb tail gives you far more control when it comes to making adjustments to the wet/dry balance of your mix.

I’ve been trying to get my reverb settings worked out, but when I settle on what I think sounds right two main problems repeatedly arise. The first is that a fresh listen always shows I’ve used too much reverb, but I then don’t know where to back it off. Should I go back in the mix and reduce the reverb on all instruments or should I just reduce the fader level on the reverb channel? And which reverb effects should I address? I’m using separate effects for blending, for giving a sense of size/space, and for adding sustain to different instruments.The second problem is that, when I reference my mix to other tracks, my song doesn’t seem to blend as well as a whole, and it always stands forward of the reference mix. Equally, the tone of any reverb I can hear on the reference always sounds very close to the original sound source (ie. booming kicks still boom in the reflections, it seems). So should I be using more EQ to get the tone of the reverb closer to the instrument? Will this allow me to use more reverb in general, to push my tracks further away from the listener? Incidentally, I’m mixing in the worst kind of room from an acoustic perspective, so headphones are the only way I can hear any subtlety in the mix, although they’re not bad ones: Audio-Technica ATH-M50X to be exact.

Mike Senior replies: How much reverb you add to each instrument using the sends system affects the relative balance, so if you’re generally happy with the balance and depth perspective relatively speaking, there’s no need to adjust any channel settings. You should be fine just tweaking the return-channel faders for whichever effects appear to be the culprit. The quickest way to track down the offending effect is simply to toggle the mute switch while it’s playing. That’ll highlight its impact on the mix very swiftly, and it’s something I do frequently while setting up my own effects at mixdown.

Your second problem is trickier to remedy. If you’re not getting enough of a sense of ‘glue’ in your mix without simultaneously making the mix sound too wet, then the first thing I’d do is increase the relative level of any shorter ambience-style reverbs you’ve got going — anything without a reverb tail. Shortening the decay time of such patches and/or reducing the pre-delay parameter may also help with that. If the blending effect begins to become too obviously audible before you can add enough for blending purposes, that’s the moment I’d start attacking the return channel with EQ. A nifty trick here is to turn the blending-effect return channel up too much, and then EQ out whatever frequency ranges seem to stick out most obtrusively. This concentrates the EQ into those areas of the spectrum where it can operate most effectively and invisibly. You might say that this is effectively the same as EQ’ing the reverb to match the sounds it’s applied to, but in practice I think it’s a little more complicated than that, because the equalisation is also in aid of overall mix clarity and the subjective audibility of the effect.

The pre-delay parameter may be worth investigating for your longer reverbs too, as it can dramatically affect the audibility of a given level of reverb. Broadly speaking, adding pre-delay to a longer reverb makes it easier to hear, so it means you can get a similar subjective ‘wetness’ in your mix with a lower reverb level. Doing this often helps clear up mix clutter, and can help address exactly this kind of difficult ‘too wet, but also not wet enough’ malaise. One other thing to experiment with is using feedback delays to feed into shorter reverbs, rather than using too long a reverb in itself. This can give you a sense of reverberant expansiveness and sustain, but without the same degree of overall mix clutter, so again might enable you to get more subjective impact from your longer-tail effects without using as much sheer effects level.