Q. How do I hook up my reel-to-reel tape machine? Skip to main content

Q. How do I hook up my reel-to-reel tape machine?

I recently purchased a second-hand Tandberg reel-to-reel tape machine and I'm having difficulties connecting it to my external hi-fi. I was provided with a lead that has a five-pin socket at one end and phono leads at the other, which I plug into the 'analogue in' socket on my hi-fi. However, when I'm playing tapes the music only comes out of one channel. The back of the Tandberg has two of these five-pin sockets and also three other holes, marked 'p up', 'amp' and 'radio'. Can you tell me how I can get the sound coming from both speakers and not just one? Any help would be most appreciated by this novice reel-to-reel owner!

Technical Editor Hugh Robjohns replies: There are several possibilities here. The most obvious one is that the DIN-phono lead you have is broken. DIN is the Deutsches Insitut für Normung, a German standards-setting organisation, and it specified a range of connectors using a similar body with between three and 14 pins. The three- and five-pin versions were used a lot on hi-fi equipment in the '60s and '70s, before the RCA 'phono' socket became the standard interface, and now the five-pin DIN is most commonly found on MIDI leads. If you have a test meter, check the connections between the phono plugs and DIN pins to see if the cable is faulty. 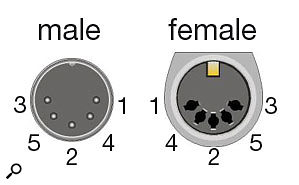 For some bizarre reason, some manufacturers' implementation of the DIN wiring is exactly the opposite of others, so although I am giving the most common way of wiring them up, bear in mind that this is not always the case. The 5-pin DIN sockets were used to convey stereo unbalanced signals. The DIN pins on a male jack are numbered in the order 1, 4, 2, 5, 3, clockwise from right to left (see diagram). Normally, pins 1 and 4 were used for the left and right inputs, respectively, and 3 and 5 for left and right outputs, with the middle pin of the five (pin 2) serving as the common screen or earth connection for all four signals. If your DIN-phono lead only has two phono connectors on it, the centre pins of the two phonos will either go to 1 and 4, or 3 and 5 — a test meter will help you find out which.

The other possible explanations for why you're only getting output on one channel are broken electronics within the machine itself, or that you are trying to play a quarter-track tape on a half-track machine (or vice versa)...

You can check the latter by looking at the heads or making a test recording to a blank tape. A half-track head uses almost half the tape width for each channel, so you'll see the two head gaps occupying just under half the tape width, with only a small gap (guard band) between them. A quarter-track head uses slightly less than a quarter of the tape width for each track, and the two channels are separated by a quarter-track width, so the two head gaps are separated by the width of another head gap.

As for the 'p up', 'amp' and 'radio' sockets, this suggests that the machine has a built-in record selector and preamp. 'P Up' will be an RIAA phono pickup input, for example. 'Radio' is pretty self-explanatory, and 'Amp' is probably another line-level input — but it could possibly be an output intended to go to a preamp. It would be worth checking anyway!