Q. How can I use side-chains in Steinberg Cubase SX? 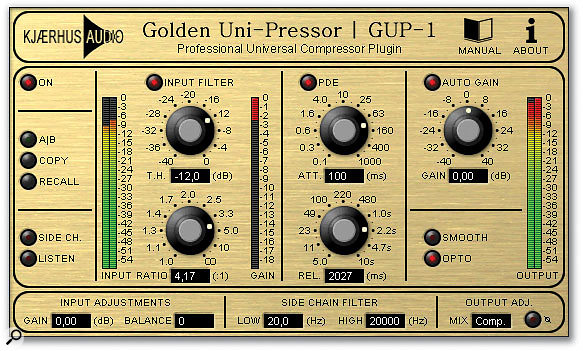 Kjaerhus Audio's Golden Unipressor allows the use of side-chain inputs in Cubase SX.

I've been using Steinberg Cubase SX for a couple of years now, but although the bundled VST dynamics plug-ins in SX 2 are perfectly reasonable, after reading up on various production methods I've realised that professional studios make a lot of use of 'ducking' and 'side-chaining' compressors in order to keep the vocals or lead instruments in balance with the main body of the mix, for example. I know this sort of thing is possible in Reason or Live, but from what I understand of Cubase, signals cannot be 'routed' in this way to a compressor's side-chain to modulate another signal. Or could it be done with something like the Xlutop Chainer or some such virtual router? The Waves plug-ins feature side-chain options, but I wouldn't know how to route a signal into them (and, as far as I know, Chainer doesn't support them). I'd greatly appreciate your advice.

Features Editor Sam Inglis replies: You're quite correct that the SX mixer is not very good for side-chaining using external key inputs. In fact this is true of many other DAW programs, too; the only one I know that currently offers the necessary flexible bussing structure is Pro Tools. For instance, I'm pretty sure that the side-chain features on Waves plug-ins only support external key inputs when used in Pro Tools — in SX and other applications, the side-chain is always the same as the audio input itself.

Recently, however, a few plug-ins have appeared that allow you to compress a stereo track in SX with the side-chain keyed from a separate source track. The way this works is a bit clumsy: you need to create a surround channel on the mixer, then route both the audio source and the side-chain signal to it. That way, a 'surround' plug-in inserted on that channel can 'see' both the audio source and the side-chain signal. Plug-ins I'm aware of that allow you to do this include Otium FX's Compadre, DB Audioware's dB-D dynamic processor and Kjaerhus Audio's Golden Unipressor (shown above). I should point out that I haven't tested any of them, though!