Q. How do I set my DAW levels to match my hardware? 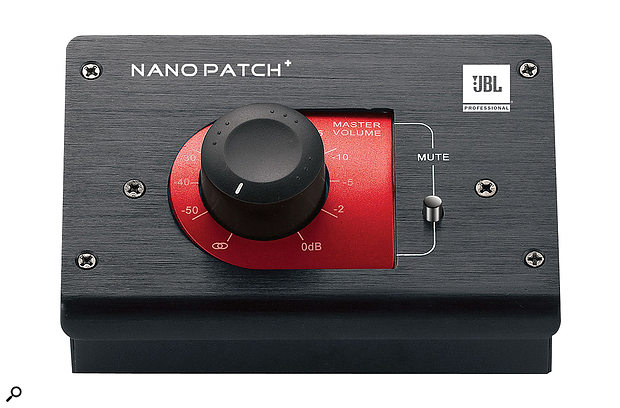 Not just a monitor controller: if you have a device like Warm Audio’s EQP-WA, which adds gain even with no EQ applied, you can compensate for this using a passive attenuator such as the JBL Nanopatch+.

Technical Editor Hugh Robjohns: In August 2016’s SOS we printed a Q&A derived from the SOS Forum about interfacing analogue hardware processors with audio interfaces — and there’s been a development worth reporting!

In this specific case the analogue hardware was a Warm Audio EQP-WA Pultec-style valve equaliser, and it was being connected to an RME Fireface 800 interface. I explained how RME’s very versatile I/O level options allowed a variety of working configurations to suit different operating-level scenarios both within the DAW and in the analogue hardware.

While that advice remains as true as when I gave it, it subsequently transpired that, despite adopting a nominal -20dBFS operating level in the DAW and configuring the interface with the Hi/Lo Gain modes (to work with professional-standard analogue levels), there was a rather odd problem. In essence, the return signal from the Warm Audio EQP was found to be roughly 6dB hotter than the send signal, and this remained the case whether the unit was switched to bypass or not (with flat EQ controls).

However, physically bypassing the outboard (by connecting the input and output XLR cables together) resulted in unity gain through the analogue path, proving the interface was working correctly.

In researching this curious problem it appears that many others have also found the Warm Audio EQP-WA to introduce an overall gain boost of typically somewhere between 3 and 6dB — and as the valve amplifier stage remains in circuit when the EQ is bypassed, so does the gain boost! The manufacturer says this is ‘normal’ for this product, and that part of this discrepancy is due to the fact that the output transformer was originally designed for use in a 600Ω matched-impedance environment. Consequently, when used within a modern matched-voltage environment the output level rises slightly (although this is typically less than 1.25dB).

In fact, the bulk of the gain boost naturally comes from the valve gain stage itself, and although later models have output-level trimmers (intended for stereo matching between separate units), the range appears to be inadequate to dial out all of the excess gain in many cases.

Thankfully, for the original poster the solution was simple: by setting the RME's output mode to the +4dBu setting (while retaining the Lo Gain mode for the input), he reduced the send level by 6dB, neatly compensating for the approximately 6dB of gain added by the equaliser.

Where such a versatile and configurable interface is not available, the alternative would be to find or make an in-line 6dB balanced attenuator, or to connect the equaliser’s output through an adjustable attenuator, such as a JBL (formerly SM Pro) Nanopatch+ (shown above).