Voices are among the system resources that you can keep tabs on in the System Usage window. Since Pro Tools 11, however, each HDX card has 64 extra ‘hidden’ voices used for mixer routing that don’t show up here.

Frustrated by I/O limitations in Pro Tools? Here’s how it all works.

I get asked a lot of questions about voice, track and I/O counts in Pro Tools. It seems there is a significant amount of confusion on this topic, so this month, I am going to try to explain what each of these things are and how they relate to each other, what impact they have on the ways in which we can use Pro Tools, and how they differ in typical Pro Tools systems.

What Is A Voice?

In Pro Tools, voices are different to tracks. In more recent versions of Pro Tools they have been hidden from us more and more, so it is easy to get track count and voice count confused. In essence, voices are unique, discrete audio streams that can be routed to and from Pro Tools audio tracks and the physical audio outputs and inputs on your audio interfaces.

Early Pro Tools systems were typically limited to four, eight or 16 voices; you could have more tracks than voices, but the voice count represented the maximum number of tracks that would play sound at any one time. So, in my four-voice Pro Tools 442 system, I could have eight mono tracks in a session (stereo tracks weren’t yet available), but only four of them would play at any one point in time. I had to manually allocate the voices across the tracks so that the correct four would play when required.

Typically, each audio channel for each track in your Pro Tools session uses a single voice. So mono tracks will use one voice, stereo tracks two voices, 5.1 tracks six voices, and so on. But because voices are audio streams, there are situations where more than one voice per channel is required. For example, when using Punch Recording, two voices are needed for every single audio channel: one for playback, and one for recording on punch-in and -out.

Across all versions of Pro Tools, the maximum number of ‘voiceable tracks’ is 768: this is the maximum number of audio tracks that can share the available voices on your system. However, on HDX systems, which have DSP processing, voices are also used by other operations because they are audio streams in and out of the Pro Tools mixer. For example, if you insert a native plug-in after a DSP plug-in, this will use a voice for every channel of audio in and out of the Pro Tools mixer, so inserting a 5.1 native plug-in after a DSP plug-in will cost you 12 voices. However, you won’t necessarily see this in your System Usage window, because Avid made a firmware revision to the HDX card during the Pro Tools 11 release that added an additional 64 hidden voices for each HDX card you have. These can’t be used for track count, but are reserved for getting audio streams in and out of the Pro Tools mix engine in situations where you have a native plug-in followed a DSP plug-in. On HDX systems, voices will also be used up in the same way when you use HEAT and the first plug-in on the track is a native plug-in — HEAT uses the DSP chips and so is effectively a DSP plug-in.

Voices in an HDX system are dynamically allocated to tracks (‘Dyn’).

An HDX1 system and an HD Native system appear very similar on paper, as both can support 256 voices. However, there are some differences, which might be relevant if you’re choosing between the two. On HDX systems, voices are allocated dynamically and cannot be changed manually, so once you hit the maximum of 256 voices, that’s it: only the tracks using the first 256 voices in the session will play back. If you open a session with more voiceable tracks (remember the maximum is 768 voiceable tracks across the board), Pro Tools HDX systems will prioritise tracks higher up in the Edit window (or on the left side of the Mix window). With an HD Native system, by contrast, it is possible to allocate voices manually, like I could on my old Pro Tools 442 system. This means you can manage your voices, sharing them out over tracks that don’t have audio playing at the same time, making it possible to have up to 768 active tracks, as long as you don’t want to play back audio from more than 256 of them at any one point on the session timeline.

HDX systems always give you a fixed 256 voices per card, plus the above-mentioned 64 ‘bonus’ voices used for other tasks. So if you’re going to be regularly needing more than 256 voices, an HDX2 system would be the best option, giving you 512 voices, and an HDX3 system would give you voices for every one of the maximum 768 voiceable tracks. 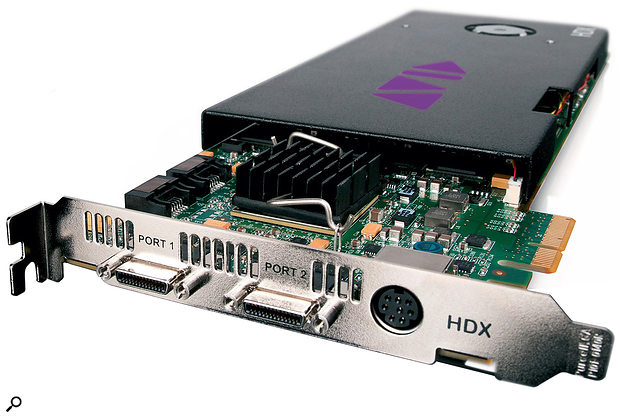 A single HDX card has two Digilink connectors, allowing up to 64 input channels to be connected.

Audio tracks are the destination of incoming audio streams (voices) from your interface(s), so the number of active tracks is limited both by the maximum number of voices in your system and the maximum number of inputs. As you can see in the table, a Pro Tools system has a maximum number of mono audio tracks that can play back or record audio at once. There is also a separate limitation on the number of tracks that can be in record simultaneously, and this is very different between Pro Tools HD and Pro Tools. For example, at base sample rates, a Pro Tools session can have up to 128 tracks, but only 32 input channels are available — even if your interface offers more physical inputs than this. These 32 channels can be used to feed any combination of mono and stereo tracks, with a stereo track using two channels — other multi-channel formats are not supported in non-HD Pro Tools — meaning that you can only ever record to a maximum of 32 mono tracks simultaneously. 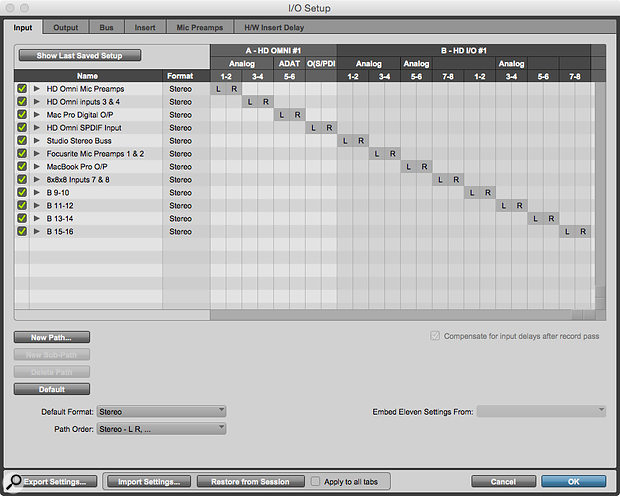 Many physical interfaces don’t use all of the possible inputs an HDX card can achieve — with an HD Omni and HD I/O connected, I get a total of 24 mono inputs.

Moving to HD, each HD Native or HDX card has two Digilink ports, each of which can handle up to 32 input channels and 32 output channels. The actual number of channels of inputs and outputs you get will depend on the combination of interfaces you attach to these ports: for example, if you have just an HD Omni attached to your HD Native card, your system will only offer eight inputs and eight outputs, while an HD I/O attached to an HDX1 system will give you 16 inputs and 16 outputs. If you only occasionally need large I/O counts, it might be worth considering renting additional interfaces as needed, rather than buying lots of expensive hardware that doesn’t see much use.