Q. How much EQ is too much? 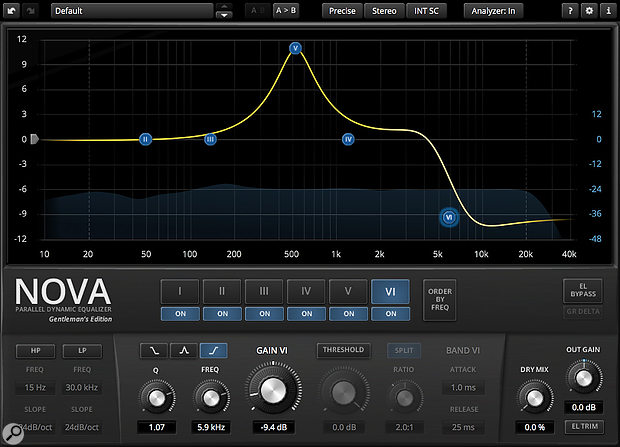 There’s nothing inherently wrong with large EQ boosts if the result sounds good — but if they’re more than about 6dB, it’s probably a sign that there’s a better cure somewhere else!

I do a lot of dance music, and have been referencing my mixes against commercial releases. How can I get the fat synth sounds of my references without going nuts with EQ? For example, I have a song I’m working on at the moment where I have to boost 15dB at 350Hz to get anywhere near the reference material. Is it okay to drive the gain so hard, or should I resist and try to get the full body of that sound otherwise? I’ve read advice like “if you’re having to push your EQ more than 6dB then something’s wrong,” so I don’t know if I’m doing the right thing here.

SOS mix specialist Mike Senior replies: The bottom line with EQ is that if it sounds right within the context of the full mix, then it is right. So if 15dB extra level at 350Hz gives the sound you’re looking for, then I wouldn’t categorically rule it out as ‘a bad thing’. That said, there are good reasons why some engineers (myself included) start to feel jittery if we’re adding more than about 6dB of EQ gain at mixdown.

The first thing is just that such an EQ boost usually implies that the raw sound wasn’t actually very suitable for the arrangement in the first place. In a situation such as yours, where you’re the artist as well as the mix engineer, I’d interpret the necessity for a 15dB EQ boost as a message from the Gods of Dance Music that you need to program a more suitable bass sound in the first place! In particular, I’d pay careful attention to the specific waveform(s) you’re using, and how exactly they’re tuned with each other if there’s more than one active, as mistakes there are usually beyond the capability of EQ to solve.

Another cause to be cagey about the urge to do massive EQ boosts is the danger that you’re trying to do with EQ what would be better done with a different mix processor or effect — albeit perhaps still in combination with EQ. Remember that EQ only really changes the level of frequencies that are already there, rather than adding anything new, so if you’re after dramatic tonal changes you’re probably better off addressing that by adding new synth layers, or pitch-shifting existing ones, or using some effect that generates additional frequency information — things like ring-modulation or distortion, for example.

But even if it is just EQ that’s required, such a large EQ boost over a comparatively limited range of frequencies brings another more technical problem if your bass line covers any substantial pitch range: different harmonics of each note will coincide with the frequency peak depending on the specific pitch, so the balance between the bass sound’s internal harmonics may change undesirably from note to note. Admittedly, Sound Radix do now offer a plug-in, SurfEQ, that can get around this problem by creating an EQ curve which tracks the sound’s pitch, but to be honest I think I’d still question your sound-design chops if you’re having to use that kind of specialist processor to bail you out on a regular basis.